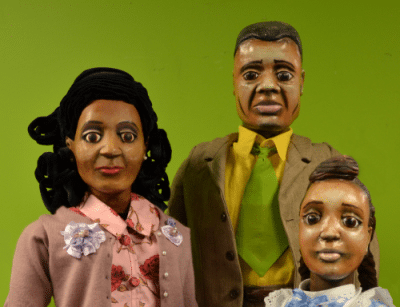 Review: Center for Puppetry Arts’ “Ruth and the Green Book” views injustice through a child’s eyes

At the start of the story of “Ruth and the Green Book,” at the Center for Puppetry Arts through February 26, we see that Ruth’s parents want to protect their young daughter from a harsh reality. Ruth’s mother is in the kitchen preparing food for the family to take on a trip to visit Ruth’s grandmother in Alabama, but she glosses over why she’s making so much. When Ruth asks, she breaks into an upbeat musical number about how it’s always best to be prepared and “you never know what the road ahead may bring.”

The truth is, as we discover later, that Ruth’s parents doubt they’ll be able to find a restaurant where a black family from Chicago visiting the South in the 1950s will be welcome. It’s just one of many complicated and expertly executed moments in this production. Based on a children’s book by Calvin Alexander Ramsey and adapted and directed by the center’s artistic director, Jon Ludwig, “Green Book” does a difficult thing well: it dramatizes injustice, social issues and history in a family show.

The production primarily uses large hand-held puppets with visible puppeteers in period costume, although there are several scenes that utilize small marionettes. The action is so absorbing that we lose awareness of the puppeteers, even though they’re always deliberately very present.

It’s surprising, too, how many locations the show conjures up on the downstairs theater’s small stage: Ruth’s family’s kitchen, the car in which the family takes its journey, gas stations, a forest, a meadow, the beaches of Normandy in Ruth’s father’s recollections, a friend’s home, a hotel lobby and even a stop in Atlanta.

Especially effective is the use of passing road signs, moved along by a puppeteer. The family first reads the amusing verses of Burma-Shave signs as they pass by the window, then the effect turns serious as the signs begin to read “Whites Only” and “Sundown Laws Enforced.”

As in many of the Center for Puppetry Arts’ shows, the puppeteers are called on to do a great deal beyond manipulating puppets: they sing, dance, act and are present onstage throughout. S. Renee Clark, who wrote the music, also plays it on keyboard and voices the part of Mama. The cast has more facility with the uptempo doo-wop songs than the ballads or opening rap number, but the music throughout stays compelling.

Though it is clearly aimed at children and young teenagers, the heart of “Ruth and the Green Book” is never oversimplified. Instead, it grapples with the complexity and harshness of racial prejudice before the civil rights era.

Ruth witnesses the humiliation and disempowerment of her parents several times. The legally sanctioned prejudice even becomes potentially a matter of life and death when she is stung by a bee and turns out to be allergic. At one point, in a nicely fourth-wall-breaking moment, one of the puppeteers declares that he is so upset by the goings-on that he refuses to continue with the story. The other puppeteers persuade him to continue, effectively modeling rational debate in the face of emotionally charged issues.

The show handles complicated and troubling issues well, never sugarcoating things but presenting them in their full complexity. “Green Book’s” makers and performers demonstrate that even non-human objects, when expertly handled, can effectively convey the terrible human costs of prejudice and legal inequality.