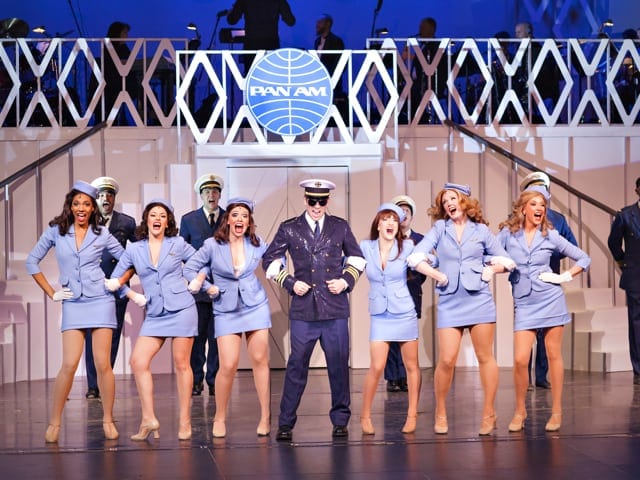 Review: “Catch Me If You Can” fun, energetic (though undercooked) at Atlanta Lyric Theatre Catch Me If You Can is partially set in Atlanta. (Photo courtesy Atlanta Lyric Theatre)

He was a doctor. A lawyer. A pilot. Or at least he claimed to be. Frank Abagnale Jr., was one of the great con men of all time — and a wanted criminal by the time he was barely out of his teenage years.

Abagnale is the heart of the just-opened musical Catch Me If You Can, running through March 1 at the Jennie T. Anderson Theatre in Marietta, courtesy of Atlanta Lyric Theatre. It doesn’t translate to the stage seamlessly — despite its premise — but there’s no denying that the Lyric stages it energetically and confidently.

Inspired by Abagnale’s biography and Steven Spielberg’s (underrated) 2002 film version, which starred Leonardo DiCaprio as Frank and Tom Hanks as his pursuer, Catch Me If You Can opens at Miami International Airport as FBI agent Carl Hanratty (Jeff McKerley) finally tracks down Abagnale (Chase Peacock).

Before he goes to jail, the young man decides to look back on his life, like a splashy TV variety show, highlighting the various chapters of his 1960s-era duplicity. Even as a teenager, Frank was known for scams — something his parents Frank Sr. (Alan Kilpatrick) and Paula (Courtenay Collins) discover quickly, coming to his school to learn he has pretended to be a substitute teacher.

Frank eventually runs away from home and learns all too well how to take care of himself, perfecting the art of forging checks. Frank is clever and ambitious — and a master of assuming identities, convincing people he flies planes for Pan Am and, later, that he supervises surgery at an Atlanta hospital. Eventually he winds up in New Orleans seeking to marry Brenda (Alison Brannon Wilhoit), a young nurse he has met at the hospital who believes every word he tells her.

By this time, Hanratty is on his trail, with Frank’s aliases and debts piling up. The agent assumes he’s probably in pursuit of a crafty, middle-aged man; little does he realize he is hunting down someone who is 21.

Coming from the team that made Hairspray so successful as a musical, Catch Me If You Can was considered something of a disappointment in its 2011 Broadway run, with a shorter than expected run and only one Tony Award (Norbert Leo Butz won as Leading Actor in a Musical as Hanratty).

Its book is by Terrence McNally, with Marc Shaiman handling music and Shaiman and Scott Wittman the lyrics. It’s fascinating material, yet it works better as a film. It feels a bit stretched here. The musical has a half dozen or so terrific numbers, but also some numbers and sequences that don’t add much.

As directed by Brandt Blocker, though, this production nonetheless has polish and sophistication. It’s a big, sleek musical with a lively onstage band. Chorus girls and dancers are ever-present, and many of the numbers are choreographed inventively by Cindy Reiser.

William Ivey Long’s costumes feel like the sixties — love that stewardess attire! — while Lee Shiver-Cerone’s set takes us (literally) from coast to coast, in and out of airports and hospitals.

Already a Broadway vet — featured in the original American Idiot as well as a national tour of High School Musical — Peacock sings the heck out of the role of Frank. He’s a handsome, gifted performer who gives Frank layers of charisma. It’s easy to see how he manipulates and eludes people, even Carl.

Yet, that’s all the musical gives Frank — charisma. What doesn’t come through enough is who Frank really is. His relationships with his mother and father and wife-to-be seem genuine, especially in Act II, but the musical’s chief flaw is that it makes Frank almost all mask and no man underneath.

Conversely, McKerley has the better-crafted character, and he does some career work as the sad sack Hanratty, obsessively trying to find Frank and eventually forming an unusual bond with him. Blocker knows how to rein in the actor and lets him rely on his perfect comedic timing and artistry. McKerley’s number “Don’t Break the Rules” — paying homage to the rules and regulations Frank is breaking in half — is particularly well staged.

Collins doesn’t have a lot to do as the heavily accented Paula, although she does spark up her dance-heavy “Don’t Be a Stranger” number. Wilhoit, too, is a bit underused as a young woman looking for identity, but she does have her own standout ballad, “Fly, Fly Away.” In supporting roles as Brenda’s parents, Allen O’Reilly and Mary Nye Bennett amuse.

I wish the original Catch Me team had spent more time on this and made it tighter and more balanced. It feels rushed, almost as if the creators were more focused on opening in time for Tony consideration than getting it all right. Yet there’s still much to enjoy and savor in Atlanta Lyric Theatre’s agreeable, well-cast version of Abagnale’s story.