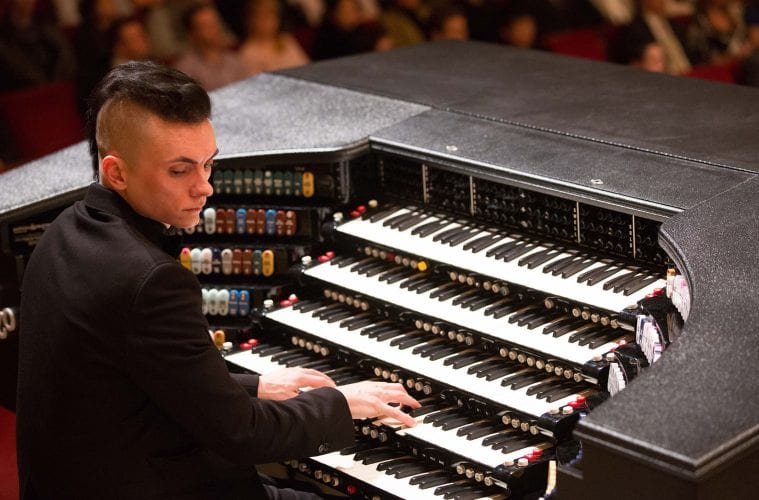 Review: Carpenter dazzles and defies convention with his custom organ at ASO appearance 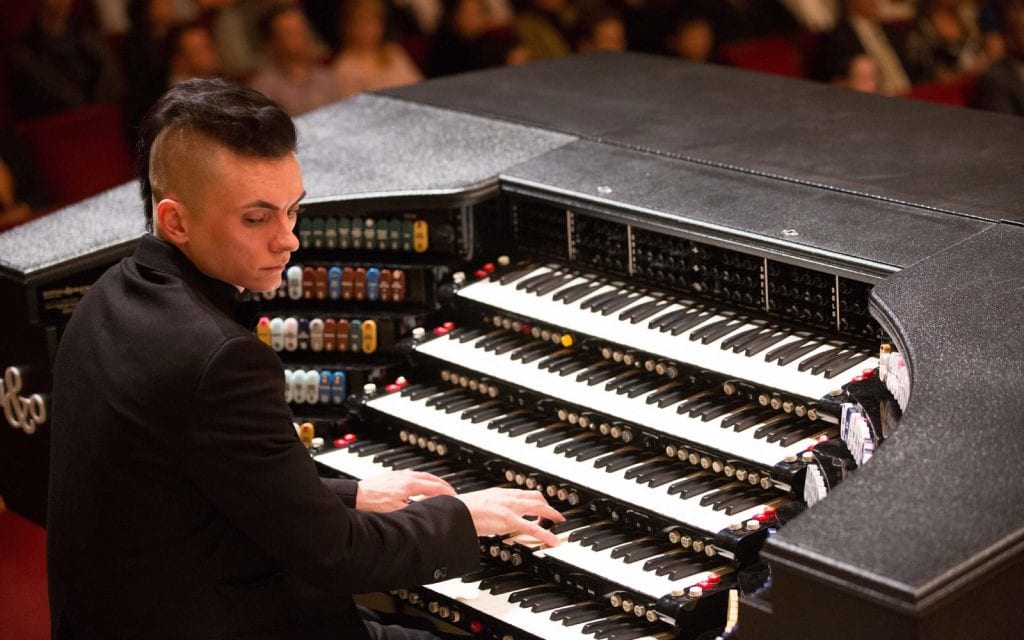 Cameron Carpenter with his custom-built organ. (Photos by Jeff Roffman)

On Thursday the Atlanta Symphony Orchestra performed an all-French program music by Messiaen, Poulenc and Saint-Saëns at Symphony Hall, led by guest conductor Jun Märkl and featuring guest organist Cameron Carpenter. The concert will be repeated Saturday at 7:30 p.m. and Sunday 2 p.m., at Symphony Hall.

Märkl’s previous appearance as guest conductor with the ASO was in March 2013, leading the orchestra music by Ravel, Mozart and Beethoven. As of this season, he holds the post of musical advisor to the Basque National Orchestra in San Sebastián, Spain. Previous posts include music director of the Orchestre National de Lyon (France) and of the MDR Symphony Orchestra Leipzig Germany). After these ASO concerts, Märkl will head to the Netherlands to lead two concerts next week with The Hague Philharmonic.

Thursday’s concert opened with “L’Ascension” by Olivier Messiaen, one of his early orchestral works, completed in 1933. This was the first time the ASO has performed it. Musically inspired by Messiaen’s ecstatic Catholicism, as most of his works are, Märkl and the orchestra brought forth an energized, rapturous reading which set a freshness of tone to start the evening. 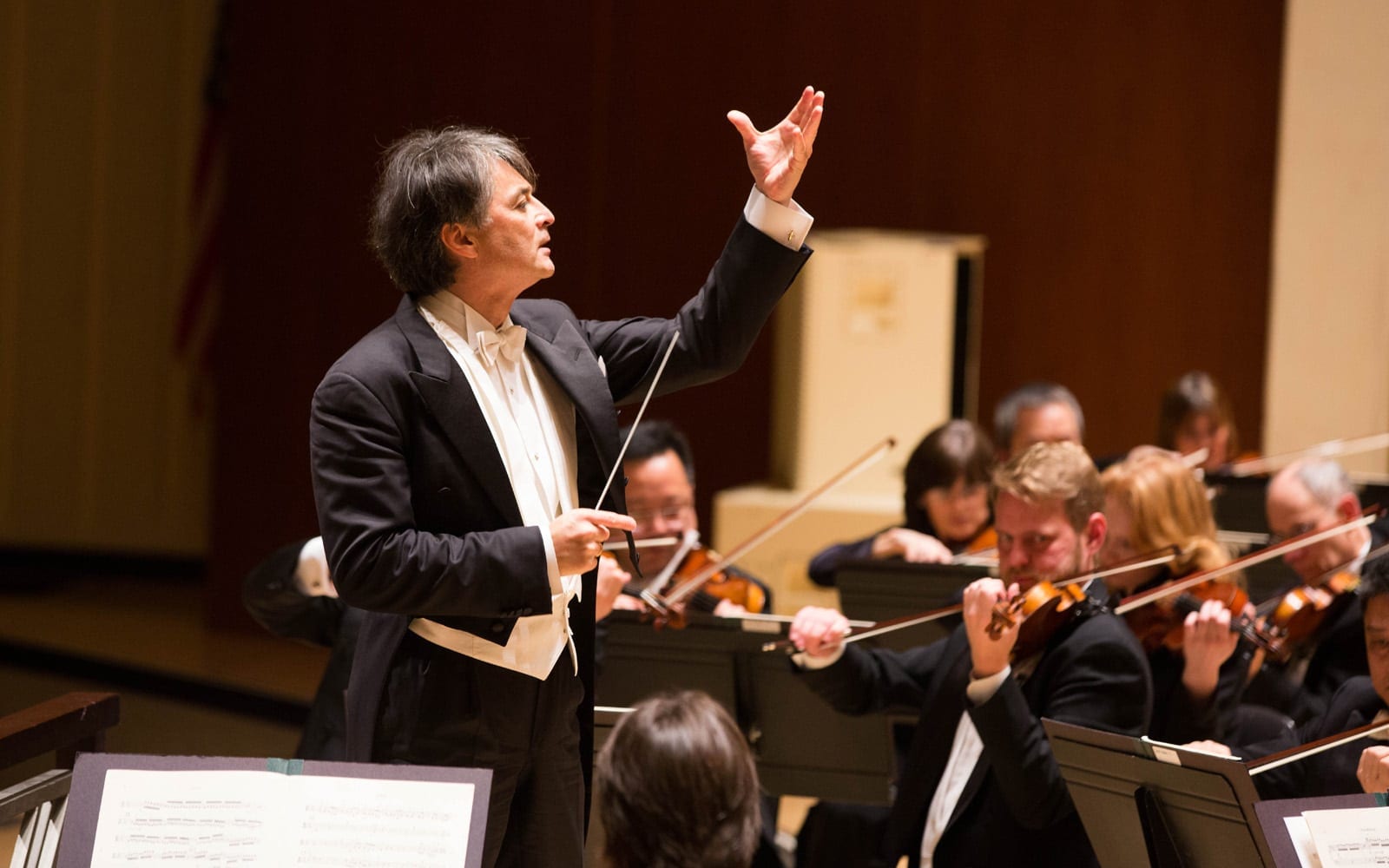 Cameron Carpenter is currently a hot item as organist, in part for his preference for playing his self-designed digital “International Touring Organ” versus traditional pipe organs, something which has not exactly endeared him among traditional organ afficianadi who prefer real pipes. Carpenter believes that computerized digital organs are the future. He is adamantly on a game-changing path for concertizing organists — assuming bets that the broader public will buy into it whether the organ afficianadi do or not. The resistance within the latter is significant.

Needless to say, Carpenter’s performance in Poulenc’s “Concerto for Organ, Timpani and Strings” was not at all canonical. Carpenter dispensed with the score’s registration markings, opting instead for his own intuitive approach which made use of his organ’s wide coloristic range and capacity for rapid, frequent registration changes and extremely smooth, linear crescendos and diminuendos.

And in part, that’s what hacks-off a number of traditionalists among organists and afficianadi. The individual personalities of mechanical organs and their limitations are exactly things of which they seem most fond, like avid collectors of antiques and curios, even though different camps within that community constantly fight among one other over preferences. For the mainline symphonic concert-goer, these contentions are likely non-issues. Taken on its own premises, Carpenter’s performance was engaging and the orchestra responded with equal merit.

After several rounds of applause, Carpenter came back on stage to play a solo encore, the infamous “Finale” from the Symphony for Organ No. 5 by Charles-Marie Widor, an oft-performed barometer of an organist’s technical skill. The velocity with which he performed was fully within the responsive capacities of his organ, though it would not be possible on many pipe organs, as the larger pipes would simply be physically unable to properly speak at that speed. Again, a part of the controversy.

During intermission, the organ’s console was moved to far stage left for the concert’s final work, the Symphony No. 3 in C minor, Op. 78 of Camille Saint-Saëns — familiarly known as his “Organ Symphony,” The instrument’s role in Saint-Saëns’ symphony is less central than in the Poulenc concerto, but is nonetheless substantively essential.

Märkl led the orchestra with gusto, the musical responsiveness between orchestra and organ was good, with the orchestra this time having the lion’s share of the musical substance, even if the organ itself had, in the end, the far greater volume. It was louder on stage, said one ASO musician afterward, than any instrument in large rock concerts he had played.

On Wednesday, Carpenter will perform a solo recital at the Kennedy Center in Washington, DC, on their Casavant Freres-created Rubenstein Family Organ. After that, a long series of Carpenter’s performances through late April will all feature his custom organ.