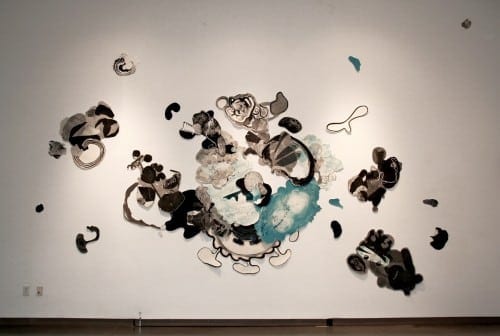 Carl Jung introduced the mandala to mass culture almost singlehandedly more than three-quarters of a century ago through his analytical psychology, but it is only in the past 50 years that Americans’ embrace of Asian religions and New Age beliefs has given rise to the idea that anything circular and/or internally symmetrical might be a mandala.

The idea is given full expression in “Contemporary Mandala: New Audiences, New Forms,” at the Emory University Visual Arts Gallery through April 15 as a complement to “Mandala: Sacred Circle in Tibetan Buddhism” at Emory’s Michael C. Carlos Museum.

The works in “Contemporary Mandala” run the gamut from indisputably belief-ful to open to mystery — and to archetypes. One of the loveliest, and least beholden to Buddhist origins, is Marcia Vaitsman’s video “Study of Strange Things, part 3,” in which a single image of a bright-colored stocking pulled onto a leg transmutes kaleidoscopically into a moving circular form that opens like the petals of a flower.

The image rotates like the Wheel of Time, which is the subject of deep contemplation in the Kalachakra mandala encountered in the Carlos exhibition. But as its title implies, Vaitsman’s video is tied neither to any particular belief nor any specific psychological model, but only to its own exploration of what these “strange things” might mean.

Faith McClure’s “How Deep the Waking in the Worlded Clouds”

Faith McClure’s spectacular wall installation, “How Deep the Waking in the Worlded Clouds,” is made in a similar spirit of respectful and semi-visionary exploration, as its independent cutout monoprints of biomorphic, quasi-cellular shapes arrange themselves in loose clusters around a vacant center. Whether the void in the middle is transcendent mystical emptiness or the gap left by the death of God as proclaimed by Nietzsche is for us to interpret, though McClure takes her inspiration both from bodily process and from Buddhist traditions.

“Mandala of the B-Bodhisattva II,” Sanford Biggers’ equally spectacular floor mandala and potential dance space, is more directly titled to situate its circular geometries squarely between Buddhist and hip-hop dynamics. (A bodhisattva is an enlightened being who refuses to enter into the condition of nirvana until all sentient beings have been similarly rescued from their imprisonment.) Tentative plans are afoot to use the piece for at least one contemporary performance.

Andra Samelson’s wall piece “Kunkhyab” (Tibetan for “all-encompassing”) consists of eight mirrored domes arrayed in a circle around a larger mirrored dome. Each dome thus reflects both the room (and the viewer) and parts of the adjacent domes. It becomes a lovely metaphoric illustration of Buddhism’s belief in the intrinsic interconnection of all of human history and natural processes and the meditational tools through which the practitioner comes to understand those connections.

Two decades older than the newest works in this exhibition, the mandalas produced by the late King Thackston are mandalas by virtue of axial symmetry rather than circularity. In some ways these contemporary mandalas are a gloriously mystical mess as all-encompassing as Thackston’s imagination was. The title of “Mandala #48: Beauty Is Re-Established” is based on a Native American prayer to the four directions and on the mapping of the seven chakra energy centers vertically arranged in the human body.

The florid excess of the eclectic imagery — a swinging pendulum arcing over a color spectrum, a turned wooden ball and an astrolabe — reflects the multiple sources of our latter-day spirituality as well as confidence in the discernment of cultural parallels that Jung was one of the first to express in contemporary terms.

Don Cooper’s wall of spectacularly rendered circles (independently created watercolors arranged as a single unit) take their titles and their inspiration from both Buddhist and Hindu sources. The “bindu” referred to in a number of the titles is the circle or dot or “drop,” which, depending on whether the word is used in Indian tantricism or Hindu philosophy, has many possible meanings: the source of male and female generative capacities; the site on the body that generates either the nectar of immortality or the poison of death; the single point through which the universe takes its origin or through which the many become one. Though Cooper has long been in dialogue with Asian spirituality, his particular expression of this peculiarly potent traditional form is distinctly his own.

Christopher McNulty’s circles and sphere (the latter formed with hot glue but looking more like carved bubble wrap) are based on a form of secular accounting that lends itself to the classically Buddhist themes of suffering, old age and death. McNulty determined from actuarial sources the age at which he is regarded as likely to die. Insurance rates are based partly on this sort of statistic, but McNulty has used it as the source for numerically based mark-making in media ranging from burnt paper to traditional etching, with titles referring to how many days he still has in his life.

The 71-inch circle of densely repeated black-ink rectangles that constitutes “20,045 Days” forms a particularly fine source for reflection about transience and mortality, though it requires the aforementioned background knowledge to see anything more in it than an exquisite example of minimalist formal geometry.

The overall message of “Contemporary Mandala” is this: although we live in an era in which the mathematics and psychology encoded in the world’s religions have been separated out into secular academic disciplines, the investigations of a relentlessly analytical academia may not have exhausted the possible meanings, and the possibilities for transformation of self and world, that were and are contained in those religious beliefs, practices and forms of art. The forms, and the beliefs and practices, are there to be rediscovered or re-invented, as the contemporary artist chooses.