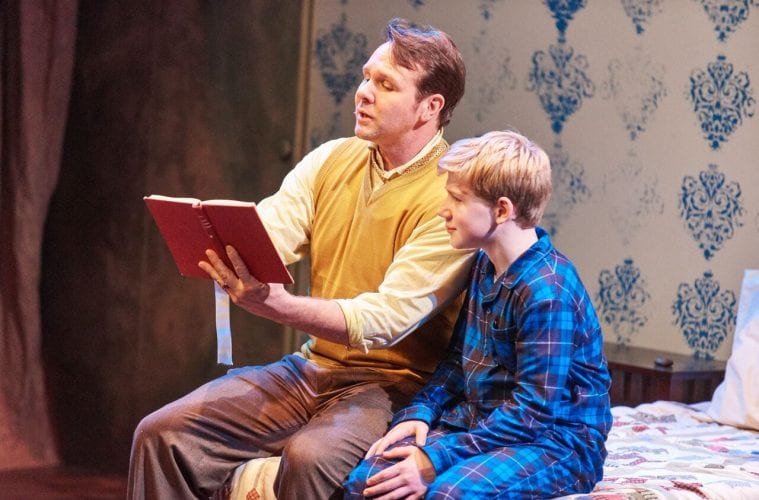 Amidst the sugary sweet procession of Nutcrackers, Christmas Carols and other holiday fare parading around the city this time of year, Theatrical Outfit is at least offering up something novel. Their production of the musical Big Fish is something new in a holiday season that doesn’t often offer much variation.

Now running through December 18 at The Balzer Theater at Herren’s, Big Fish — like Tim Burton’s film version of it — has a terrific, energetic cast but unfortunately doesn’t altogether work.

Its fascinating center is Edward Bloom (Travis Smith), a traveling salesman living in Alabama. His grown son Will (Ben Thorpe) — who has never been terribly close to his father — wants his dad to attend his wedding to Josephine (Julissa Sabino). Yet Will wants Edward to behave and not indulge in his passion for spinning tall tales from his past. Those tales include encounters with a giant (Blake Burgess), a mermaid/girl in the water (Caroline Arapoglou), various members of a circus, and even a witch (Randi Garza) who can foresee the future. Will wishes he could believe his father’s stories.

Yet the central relationship here proves to be between a young Edward and future wife Sandra (Laura Floyd). He spots her in the circus and follows her for years, even to Auburn University, where she is already engaged. The courtship and bond between the two is sweet and the two performers are quite engaging, although it’s a stretch to think that Smith and Floyd could have a grown son.

The musical is based on the 1998 novel Big Fish: A Novel of Mythic Proportions by former Emory University student Daniel Wallace, which became the 2003 film. The Broadway version, directed by Susan Stroman, was not a success, closing mere months after it opened in the fall of 2013 amid a tepid critical reaction.

The book here is by John August and he has done an efficient job of transforming it. As a stage production, this is a whimsical and often quirky show, befitting its cast of supporting, oddball characters. Yet Big Fish itself is rarely larger than life. It flip-flops back and forth between present day and the past, yet the flashbacks never feel as grandiose as one of Edward’s tall tales — and they need to be. What’s missing are the magical elements that could have really propelled this.

If the show has an overall weakness, it’s the songs. The music and lyrics are by Andrew Lippa. Sadly, few are memorable and the music really almost slows the show down. Only a handful of songs have the desired effect, such as the bouncy “Be The Hero” — featuring Edward and the ensemble — and “Daffodils,” a beautiful duet between Edward and Sandra. The central story and its themes are so compelling it’s a shame that the score doesn’t contribute more.

Theatrical Outfit has produced a lot of quality musicals of late, two with Aurora Theatre — Memphis and In the Heights — as well as this spring’s The Light in the Piazza. This is spirited but the material is simply not as rich or deep as those other musicals. Even Tim Burton had a difficult time capturing the book’s essence and a stage strips it down even more.

Yet the ensemble makes this much more palatable than it has the right to be. Director Tom Key’s cast is almost impeccable. Smith is as charismatic here as he was in Memphis and vocally he thoroughly connects to the material. The actor is also convincing as a young man and his older self. The same goes for Floyd.

It’s easy to see what has attracted this talented bunch of performers to the production. Besides Garza and Sabino, there’s William S. Murphey as a circus member and Daniel Burns playing a number of roles. Naima Carter Russell stars as Jenny Hill, a prominent face from Edward’s past. It’s nice to see the actress and Smith together again after last season’s Memphis.

In a time where too few original musicals surface and an abundance of films are adapted into musicals, this is one that should work. Its themes and subject matter are timeless. To Key’s credit, he does a bang-up job with the show’s finale, which left many audience members in tears the afternoon I saw it. If the first two hours of Big Fish had that much punch and vigor, it would be an amazing piece. As it is now, though, what it reels in is only a mid-sized catch.