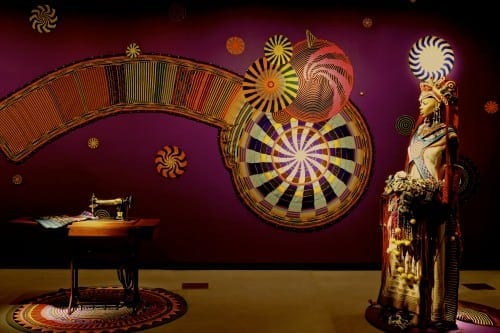 Even bold, egg-yolk-yellow gallery walls pale in comparison to Xenobia Bailey’s Paradise Under Reconstruction in the Aesthetic of Funk, the brightly colored and crocheted multimedia installation in Spelman College Museum of Fine Art’s Brides of Anansi: Fiber and Contemporary Art, through December 6.

Bailey is one of eight artists selected by the curators — Lowery Stokes Sims, chief curator at New York’s Museum of Arts and Design, and Leslie King-Hammond, professor emeritus, Maryland Institute College of Art — as “brides” for Anansi, the spider/man/god trickster figure of West African folklore. The artists twist, spin or manipulate fiber and other materials to create art as varied as it is rich and colorful.

The stories of Anansi originated in the oral traditions of the people of Ghana as a symbol of survival and cunning. This smallest of creatures imparted wisdom with his complex webs, and he could take the form of a man to address societal ills or exact revenge on the powerful.

Each of these artists brings her own wisdom and unique take on issues of history, race and hybridized identity to a show of work that is much more about transformation than weaving. They transform familiar materials often associated with women and craft — yarn, thread, beads, fabric — into something utterly new.

Like Bailey, Joyce J. Scott incorporates Native American and Asian traditions into her multimedia work, but the aesthetic here, owing to the Nigerian carved wooden figures adorned with glass and plastic beads, is clearly African. Taught beadwork when she was five by her mother, acclaimed fiber artist Elizabeth Talford Scott, Scott employs this ancient practice in new ways to explore global cultures that use beads for prayer, meditation and decoration. SHHHHH! (2012), the carved figure of a woman adorned in a bright yellow dress of plastic beads, bears the green-beaded figures of the lizard/human hybrids that cling to her body. One of them reaches to place his hand over her mouth. What is it that she must not tell?

Januwa Moja is a fiber artist and designer of African-inspired wearable art that she describes as “nu-world visionary designs.” The crowd-pleaser is the regal Queen of Spades (1996), a show-stopping gown of African print fabric and metallic ribbon adorned with feathered headdress, beads and cowrie shells.

Crown of Thorns for the Visionary (1997), a peaked “cap” created from broken glass found on the streets of Washington, D.C., represents a newer venture for Moja that is quieter but no less compelling.

Nnenna Okore, who was raised in Nigeria, transforms discarded materials into intricate, light-as-air wall sculptures by weaving, twisting, rolling and dyeing fibers, wire and other materials in the exhibition’s most literal expression of the curators’ theme. The gallery lighting created shadows that fell like graphite wall-drawings behind the sculpture and formed an equally interesting counterpart that emphasized the weblike design of the work.

The inclusion of Senga Nengudi’s work as one of the weaver “brides” was more of a stretch, literally. Nengudi incorporates nylon pantyhose in her work to address the way women’s bodies are restricted by societal gender norms. In RSVP, two pairs of pantyhose, one dark, one light, hang limply from a found bicycle tire and meet in the middle to form a crotchless void.

Sonya Clark has one of the more conceptual pieces in the exhibition, and it’s a beauty. She creates a kind of “kente cloth” from fine-toothed combs wrapped in thread and laid on a background of foil in Aqua Allure (2005). In 3/5ths (2010), another piece using thread to explore the intersections of race and beauty, Clark forms three braids of black thread — or maybe scars — down the left side of a man’s shirt in an obvious reference to the 1780s ratio established to count slaves as three-fifths of a whole person for the purpose of a state’s taxation and representation.

The Empathics (2013), Saya Woolfalk’s single-channel video, was essential to my understanding of why her fantastical multimedia installations were included in an exhibit linked by fiber and weaving. In Empathic Morphology: Herniated Consciousness (2012), hybrid skeleton/mannequins painted in pastel colors and patterns flank a high-priestess of … something . . . and peek from behind white branches on a bed of silver bubbles. In Aerial Display (Blossoming) (2012), three figures hang from the wall, levitating in petaled outfits with headdresses and silver pumps.

Though it required a little patience, the video explained it all. These Empathics are creatures formed from interspecies hybridization that, through a biomutation process and “Utopia Conjuring Therapy,” develop wings that allow participation in aerial displays.

It’s all a bit out there, and how does this sci-fi have anything to do with fiber and spiders and weaving? Woolfalk’s video reveals that the Empathics’ hybridization allows them to tolerate the experience of the in-between — and that’s where a connection can be made to Anansi. As a spider in a man’s world or a man in a spider’s, his own hybridization allowed him to live in two worlds at once. Living in two worlds at once is just what the Empathics — and these eight artists of the African Diaspora — have learned to do.