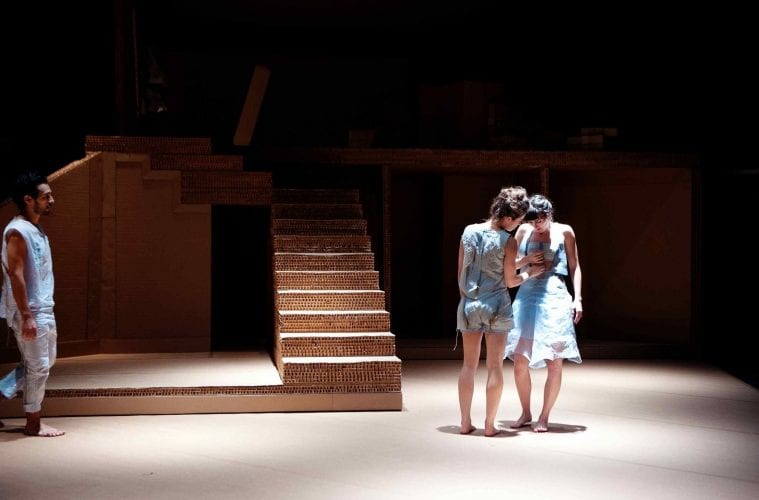 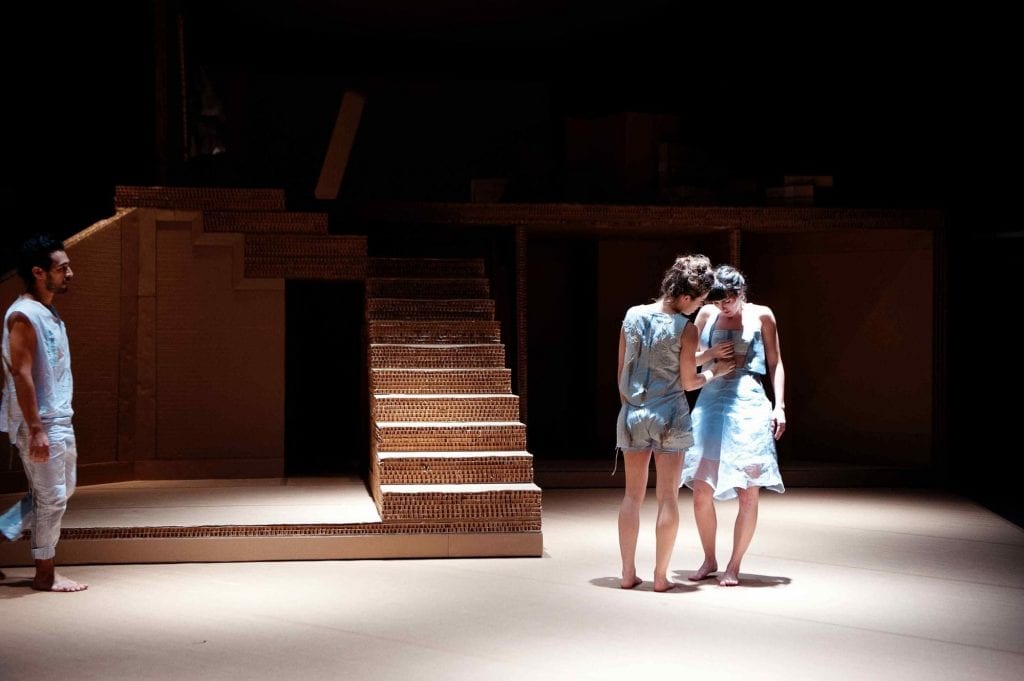 "Threshold" is set in a world made of cardboard. (Photos by Bobbi Jo Brooks)

Atlanta’ dance scene — outside of major academic, arts and commercial institutions — has a sense of fragility and impermanence. The majority of independent choreographers, whose numbers seem to be shrinking with the economy, pick up dancers and put on shows, moving from one venue to the next. Thrift and transience are the norm. Inspiration and fervent dedication are often the only glue that holds people and productions together.

Creative ideas seldom reach the degree of fruition seen in “Threshold,” The Lucky Penny’s dance performance and architectural installation that runs through Sunday at the DramaTech Theater at the Georgia Institute of Technology. A remarkable collaboration among choreographer Blake Beckham, Mack Scogin Merrill Elam Architects, Georgia Tech, composer Santiago Páramo, costume designer Tian Justman, lighting designer Joe Futral and a host of volunteers, interns and donors, it’s a testament to what is possible when people come together in support of an artistic vision.

And that vision is a dance inside a life-size cardboard house designed by Scogin and Elam. Magnificent in scope, beautifully proportioned, movable and charged with playful contradictions, its interior and exterior spaces create a lively conversation of planes, angles, textures, light and shadow.

Upon entering, audience members get an immediate sense of crossing a threshold into a strange yet familiar world. The entry is actually a fireplace, lined with cardboard bricks. Designer Karley Sullivan’s chimney — a tower of haphazardly stacked dresser drawers, wooden chairs and pieces of a bed frame — rises into the black-box theater’s light grid.

Beckham’s choreography plays with the structure’s ambiguities, posing questions and leaving many unanswered. In a dream-like, non-linear form, at times uncomfortably intimate and at others surreal, private affairs are put on public display.

Alisa Mittin, Claire Molla and Alex Abarca, all in peak condition, danced throughout Thursday’s hour-plus performance with riveting intensity, subtlety and courage to move in a way that was emotionally exposed, intimate and visceral.

Justman’s airy, light blue costumes accented their bodies — a strong focus in Beckham’s choreography — as the three interacted within the house. They crossed boundaries between need for tenderness and the instinct to provide support when needed. Sexuality was implied, a blurry and often undefined line, where intimacy and innocent curiosity morphed into aggression and even rage. Meditation and obsessive contemplation appeared part of a gamut of emotional states. Like the dancers’ bodies, these states seemed to interlock, stack themselves on top of one another and swirl in a maelstrom like scattered postcards blown in the wind. 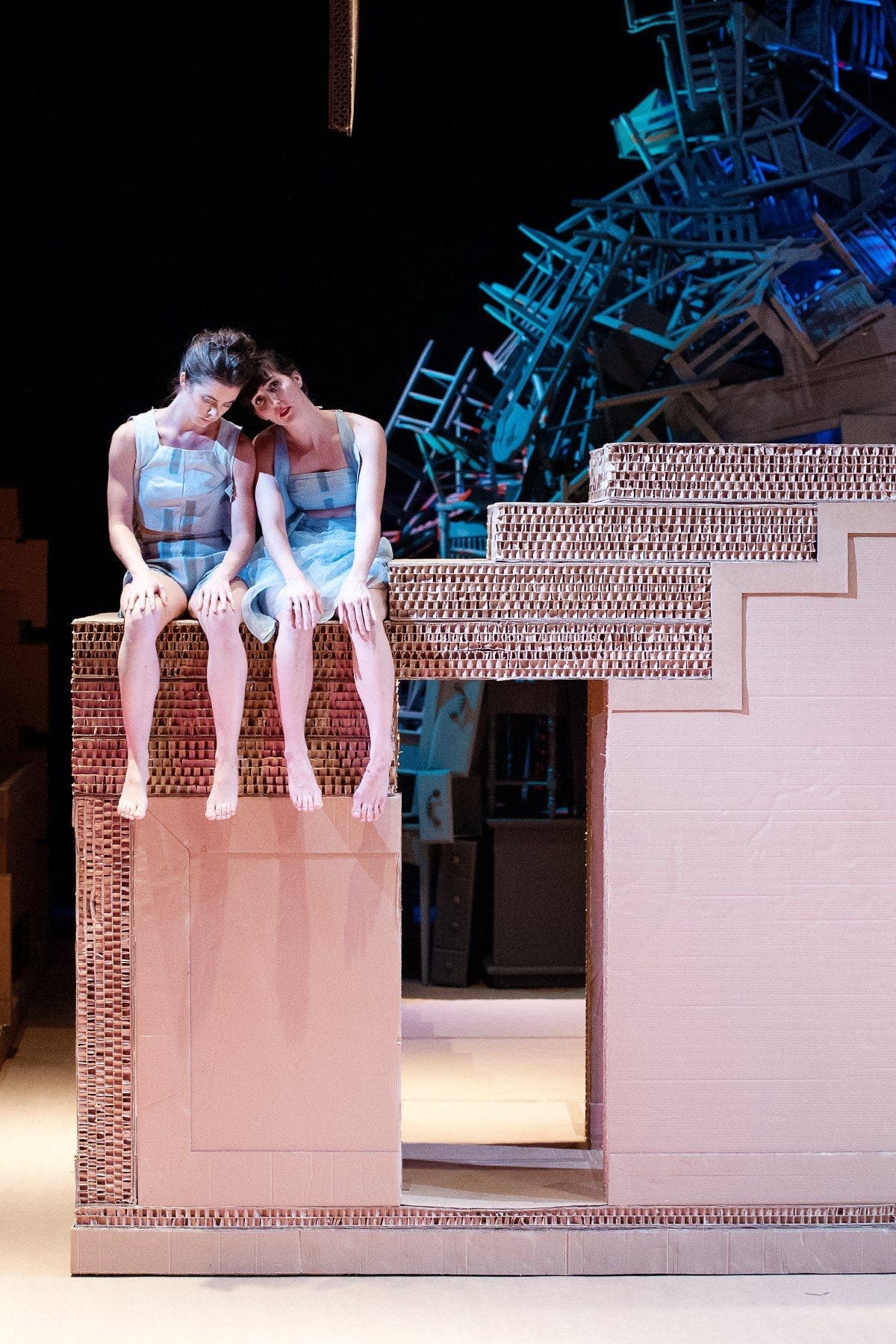 Small gestural movements — with unusual emphasis on the hands, eyes and mouth — created intimate, personal moments. These were juxtaposed with full-bodied sweeping of arms, legs and torsos, with the three dancers moving in complex configurations.

At one point, the central set piece formed a tight enclosure. The three tumbled over one another’s bodies. Then, as if feeling trapped, their movement grew urgent, then burst into animalistic rage which was then defused by outrageous laughter.

A strange, dream-like feeling permeated a section staged in a corridor with three doorways leading to small chambers. Set to a recording of a New Age-guided visualization gone rogue, the dancers were instructed to envision a house and a door. In the guided imagery, a purse became the head of a wild animal. A key fell from each of the dancers’ mouths. They paraded seal-like through the row of chambers, then, occupying individual compartments, expanded into free, voluptuous, sweeping motions. They moved in and among the chambers, evoking the puzzling image of a mirror maze.

Later, to the sound of a thunderstorm, the trio ascended a staircase to a raised platform, like a loft or attic. At one end were empty boxes, stacked as in an attic; against the opposite wall was a wheeled suitcase and above it, a grey-streaked paper jacket on a cardboard hanger, beneath a cardboard chandelier.

From behind a wall of boxes, a surreal image of Molla appeared; she had folded herself into a suitcase with only her head, shoulders and arms showing. As Molla dragged herself to the top of the stair, Mittin donned the paper jacket and folded it into the shape of angel’s wings. She swayed, whipped her body and shook until she spilled a stack of cards over the platform’s edge. Abarca threw boxes over the edge. In a nod, perhaps, to Nicole Livieratos’ “Layers,” it suggested that the empty boxes and cards contain memories that are being pulled out of the unconscious, to be sorted through.

With its emphasis on bodies and on the floor, “Threshold” left a sense that the spatial complexity of Scogin’s and Elam’s design has potential that has yet to be fully utilized. It’s sad that this marvel will be broken down. But it has given Beckham’s work a sense of form and unity that was not seen in her “PLOT” last summer.

Considering her tremendous growth since she began collaborating with Malina Rodriguez, the project’s charismatic impresario, Beckham has accomplished what few independent choreographers ever gain resources to do. Let’s hope The Lucky Penny will become a permanent fixture on the city’s dance scene.