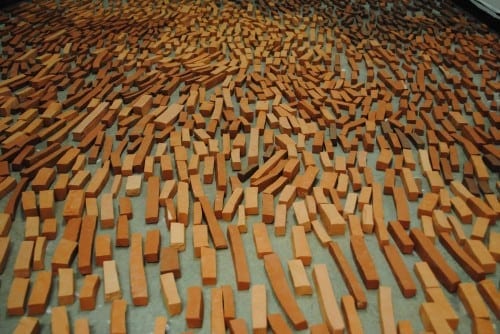 We are currently blessed with the opportunity to reflect on the different strategies of veteran Georgia artists who have long since established a signature style, and how they choose to cope with the burden of living up to an expected aesthetic.

Mario Petrirena and Susan Loftin, at Sandler Hudson Gallery until January 14, have gently expanded beyond and dramatically departed from viewers’ expectations, respectively. Petrirena offers a haunting exploration of grief and remembrance, though of whom and what remains unknown to the viewer. Memorial objects and photographs appear under glass, one of the most purely metaphoric being a stoppered glass bottle under a glass bell. A stack of vintage photographs is viewed from the side in a seemingly sealed wall box, seeming to be a symbol of unrecoverable loss until one learns that the box can be opened and the photographs taken out and examined.

Three clay sculptures, which like the assemblages are works from 2011, use endlessly repeated tallies of five strokes to emblematize, as their titles indicate, “the broken places,” “sorrows beyond measure” and “in our flawed humanity.” After this grim parade of repetition, the repeated floral bouquets and elegant fragments of handwriting on the 2011 piece “final hopes” come as a welcome relief.

In general, however, the sense of irremediable disappearance haunts both these pieces and Petrirena’s collages on paper, though the latter are lightened by the inclusion of his older political satires.

One sculpture, “memory wall,” is a wooden staff hung with buttons and religious medals, recalling practices of memorializing the dead that are common to the Caribbean, Africa and the American South. Another set of small clay pieces, “the water next time,” are house sculptures that incorporate Petrirena’s long-customary repeated bas-relief faces, but in a form that is more associated with his co-exhibitor, Susan Loftin.

Loftin, by contrast, offers three abstract “cut clay mosaics” and a “clink/clank percussion platform” of small clay rectangles, which visitors are invited to rearrange with their feet as they see fit. (Fired to different temperatures, the structurally similar objects produce slightly different levels of sound when struck together.)

The noise and the pleasing disorder is like a relational-aesthetics hybrid of John Cage (or Pauline Oliveros) and Joseph Beuys: not only are the visitors (one can scarcely call them viewers) co-creators, but whatever accidental configurations and performances emerge constitute a fully realized work of art, both auditory and visual. The installation is accompanied by “process drawings” produced with iron oxide and the clay lozenges.

At Barbara Archer Gallery through January 28, Beverly Buchanan is represented by a mini-retrospective of works from 1990 to 2011. Though currently living in Michigan, the artist still maintains a studio in Athens, from which the full-size wooden table and chair from the 1990 “Shack South Inside Out” installation were borrowed for this exhibition.

Otherwise, there is a full range of Buchanan’s brightly colored oil pastels on paper that evoke the vernacular architecture (a.k.a. “shacks”) of an African-American Southern childhood and more recent roadside observations. Though abstracted and rendered in unnatural colors, the pieces are keenly observed: the saddlebag house, for example, was a form of duplex in which the two households’ fireplaces shared the same central chimney.

Buchanan’s wooden sculptures allow for a greater range of architectural expression and to some degree satire: 2011’s “Buckhead Shack” is a ramshackle piece of modernest geometric architecture that stands in both complement and contrast to the down-home precision of her 2009 “Preacher’s Room,” in which a standard shack has a side addition that represents the guest bedroom that was reserved for visiting ministers who pastored multiple congregations.

The sculptures also delve into specific history, honoring in one case Buchanan’s grandmother, who taught in one of the Rosenwald Schools, constructed in the South on the initiative of Chicago philanthropist Julius Rosenwald, and in another, vividly painted example, a “South Florida Hurricane Survivor — Spirit Doctor’s House.”

Though she was once a central figure in the Atlanta art scene, in the years since her last exhibition here, Buchanan has become unfamiliar to a new generation of viewers. This show should mark her return to prominent visibility.