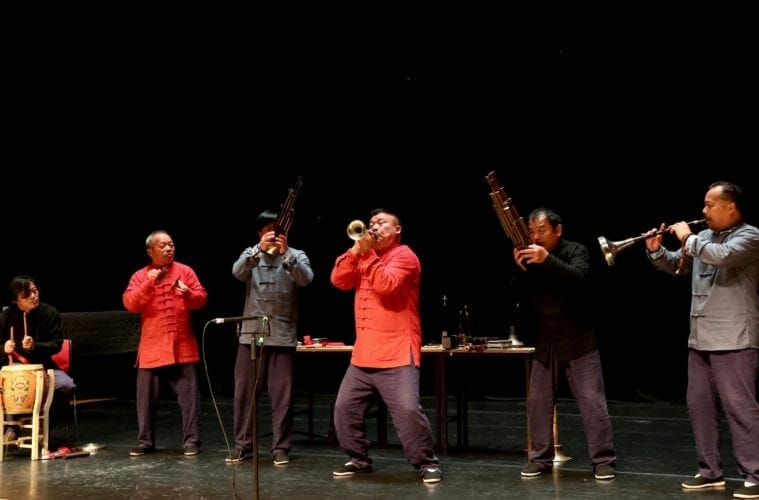 It was an evening filled with pensive introspection juxtaposed with joyous exuberance as Georgia State University’s Confucius Institute and School of Music hosted a celebration of the Chinese New Year on Tuesday night. It featured performances by Bent Frequency and China’s Zhou Family Band.

The Zhou Family Band last performed in Atlanta in 2019. That show was more inclusive, allowing audience members to play drums with the group. This time, family members performed in a concert setting, which in no way deterred from the excitement they brought to the stage.

The concert, in Florence Kopleff Recital Hall, began with Georgia State ensemble-in-residence Bent Frequency performing several contemporary works by female composers. The group, founded in 2003 by co-artistic directors Jan Berry Baker and Stuart Gerber, has consistently been at the forefront of the New Music scene in Atlanta and abroad. Baker and Erika Tazawa walked onstage with a charming nod to the Chinese New Year, each wearing a splash of red, symbolizing good luck.

Chen Yi’s “Chinese Ancient Dances” was a lovely way to open. Composed for clarinet and piano, the two-movement work was adapted in 2010 for soprano saxophone and piano. Baker opened with a commanding entrance on the saxophone that rang through the hall. Her control of pitch bending over the entire range of the instrument was fantastic.

Tazawa, an accomplished collaborative pianist from Atlanta, was consistently sensitive to her counterpart’s dynamics. Both movements seemed like a conversation between the instruments, sometimes mimicking each other but more often contrasting with smooth melodic lines in the soprano saxophone against short, dissonant stabs in the piano. Although a few places in the second movement sounded almost out of control on the soprano due to the high register and loud dynamics, this movement in particular brought both instruments into lovely melodic moments.

“Reaction (Axis III),” the third in a three-part series composed by multidisciplinary artist Tonia Ko, was performed by Sarah Kruser Ambrose, a Bent Frequency core member, on flute, and Tazawa. Ambrose and Tazawa shared the piano bench and sat back to back, facing away from each another. This created a choreographic element to the work as they rocked forward and backward during portions of the piece. This had meaning beyond the visual. The composer’s intent was to explore the rhythmic and physical axis of breath, forcing the musicians to rely on the sensation of touch as the main tool for telling rhythm, tempo and time.

This piece had a more eerie and atmospheric quality about it, with extended technique used by both musicians. The very delicate entrance in the piano was exquisite, and each performer was sensitive to the other’s dynamics. Sadly, the more intimate moments of the piece were overshadowed by the constant droning of the HVAC unit.

Both artistic directors of Bent Frequency, along with several other members, presented the Carolyn Chen piece “Made in China, Made in California.” This charming work allowed the ensemble to accompany a film of short video and audio clips of everyday life of people in China and California, as well as people in China being interviewed about what they think life is like in California, and vice versa.

During a brief intermission, the stage was struck and a buffet-size table covered in a combination of instruments not typically seen in standard Western music was placed onstage. The instruments included a large suona, the traditional Chinese double reed instrument made of wood with a metal bell, and three sheng, also known as a Chinese mouth organ.

Five men of varying ages, all in red silk jackets and white pants, stood behind the table. It was unclear exactly when intermission ended because the men posed for what looked like a photo op, but once they picked up their instruments and smiled, we knew the second half of the concert was about to begin.

The Zhou Family Band was surprisingly loud, almost deafening on occasion, but it was highly entertaining as the players constantly smiled, danced and interacted with one another. They seemed thrilled to be performing with each other and for the audience.

The group’s performance, punctuated with humor and theatrics, was an absolute delight. It is easy to understand why the Confucius Institute brought them back for another performance. It was a pleasure to hear them in combination with Bent Frequency on a program of contemporary Chinese and Chinese-inspired music. The contrast between the two made for a unique experience.