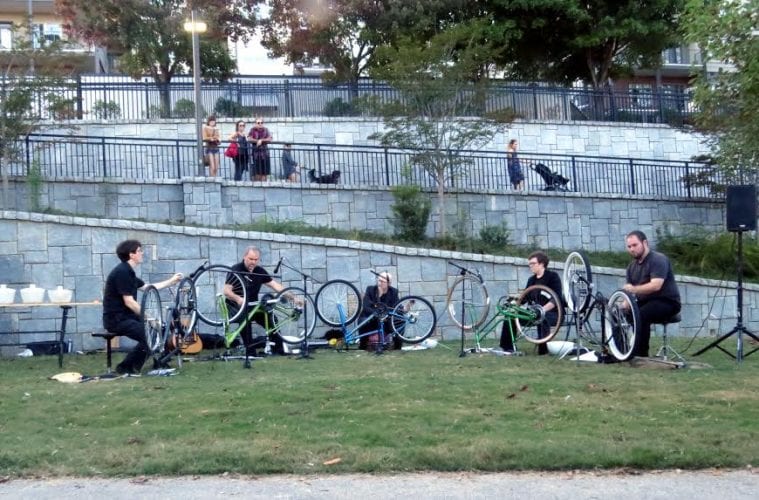 Review: Bent Frequency performs on the BeltLine; so why not use bicycles as musical instruments? Following a long spate of humid and rainy days in Atlanta, this past Sunday’s weather could not have been more ideal for outdoor activities, including the long afternoon of performances at the Historic Fourth Ward Park that were part of this year’s Art on the Atlanta BeltLine offerings. One of those was a performance by contemporary music ensemble Bent Frequency, with music appropriately themed around and performed on bicycles.

“Bicycle Built for 111” featured music by Mauricio Kagel, Matthias Kaul and Atlanta’s own Klimchak, who was also one of the performers in the 5:30 p.m. concert that mostly took place on a flat, open lawn space above and to the south of the park’s amphitheater, where other performances were presented that day.

Mostly, one has to say, because the west end of that vividly green lawn was the destination for Bent Frequency’s opening work, “Eine Brise” (“A Breeze”) by German composer Mauricio Kagel. “Eine Brise” is an audience participation piece, specifically an audience of cyclists.

Beginning somewhere in the Georgia Power parking lot that abuts the east side of the park, the volunteer participants from the community honked bicycle horns, dinged bicycle bells and made vocal sounds, following instructions on path signs en route to the far end of the lawn where Bent Frequency had set up its stage for performing the other two works on the program.

“We tried to incorporate bikes into our programming of the music since we had initially wanted to perform directly on the BeltLine,” Jan Berry Baker, Bent Frequency co-director, said in an email after the concert. “‘Eine Brise’ is a community-minded public art piece. While difficult to program because of the numbers required and the space required in which to perform it, it was a great way to reach out to our community and involve them.”

After the largely wheeled and helmeted audience settled in on the lawn, it was time for the world premiere of Klimchak’s “Pied Piper of the Ether,” performed by the composer, saxophonist Baker and percussionist and co-artistic director Stuart Gerber. Like almost any work by Klimchak, the instrumentation was unusual. It included, most prominently, a bicycle-powered theremin played by Klimchak, and an array of five amplified salad spinners as part of Gerber’s battery of musical objects.

Klimchak describes “Pied Piper of the Ether” as “an abstracted examination of the passing contact between civilization and nature. Since the BeltLine is built on old train lines, I imagined what the train lines might have sounded like before, during and after the passing of a train.”

The piece started with sounds of nature, undisturbed, then was joined by the solo theremin, which the composer says represents the city at peace with nature. The peaceful atmosphere was interrupted by the coming of a passing train, portrayed by the sounds of the amplified salad spinners. The train, initially distant, seemed to chug along the tracks toward the listener.

As the train appeared to come closer, a train whistle was heard. The music successfully abstracted the doppler effect of a real train passing. The sounds of nature, like the ones heard at the beginning, returned as the roar of the departed train receded into the distance.

Kilmchak and Gerber were then joined by percussionists Olivia Kieffer, Brandon Dodge and Tim Feeney in a performance of “Wheeled” by German compose Matthias Kaul, composed in 2010 for five percussionists with five bicycles. The bicycles were upended, wheels in the air.

Wheels and spokes were rhythmically struck with various implements. Kaul, who is himself a percussionist, took his inspiration from the kinds of sounds he experienced during childhood, from running a stick along an iron fence to similar sounds made by fixing a card or other objects on a bicycle wheel so it would strike the spokes and make a clatter as the wheels turned.

This was the American premiere of Kaul’s piece and Gerber is interested in performing it again, but in a good concert hall because, he says, there are so many subtle sounds in the work that were completely lost in the outdoor performance venue. Nevertheless, the performance went rather well in the limiting circumstances and among the three pieces, it seemed the most immediately grasped by the audience.

At the end, there was an attempt to perform Kagel’s “Eine Brise” again, in reverse direction on the same path, but a majority of the cyclists had dispersed by then, making it a much lighter postscript to the performance.