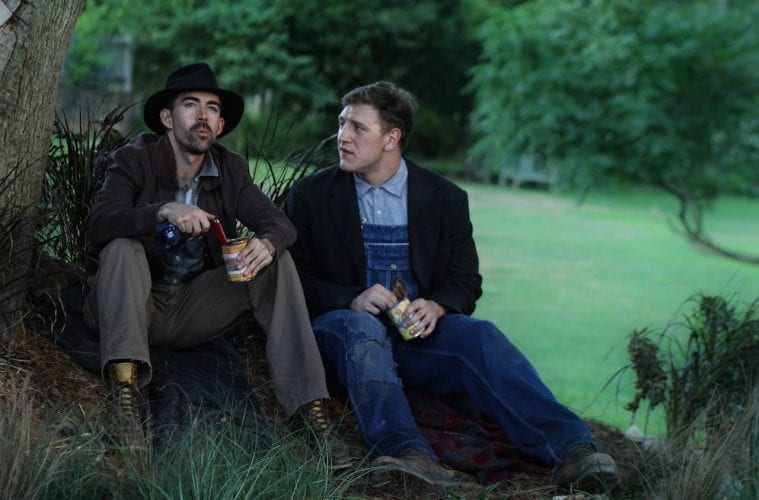 In a time where it seems everyone has a newsfeed, it is hard to imagine a period where living “off the fat of the land” was the American Dream. Less than a century ago, during the Great Depression, not far from what is now Silicon Valley, men and women tried to make an honest living and some of them lost their lives trying to find the life of their dreams in the West. These people are the subjects of many of John Steinbeck’s works — The Grapes of Wrath, The Red Pony and East of Eden are quintessential examples — but none is as socially complex as Of Mice and Men.

The Serenbe Playhouse production, under the direction of Jenny Lord of The Juilliard School, runs through June 26 and is staged in the Hay Barn at the Inn at Serenbe, an idyllic setting for this piece. In Of Mice & Men, Steinbeck weaves a tale of companionship and mercy in a time where people had to make tough choices. During the Depression, comrades George (Daniel Parvis) and Lennie (Blake Burgess) are migrant workers who head to Soledad, California, to work on a wheat farm with the unlikely dream of buying their own land. When they arrive to the farm’s bunkhouse, they encounter a colorful cast of characters including the aging rancher Candy (Michael Rudko), a mule driver called Slim (Bryan Brendle) and a black stable buck named Crooks (Daviorr Snipes).

No encounter, however, changes the course of their lives like the one with the boss’s son Curley and his cuckolding wife. George is the brains of the duo, and he warns Lennie to stay away from Curley’s wife, but one night when Curley’s wife gets too close for comfort to Lennie, the consequences destroy their dreams forever.

The hillside grass in the distance, the sound of tree frogs and the starry sky transport the audience to Steinbeck’s imagination. Despite the lush setting, this cast of clean-cut city slickers struggles to convince as rough outdoorsmen. Burgess’ Lennie hobbles over Steinbeck’s language and never strikes that balance between dumb, sincere and hyper-masculine. Parvis as George is too refined and lacks spunk. There are, however, some standouts in this ensemble cast. Brendle, Snipes and Rudko all capture the grit of the American West perfectly and are a delight to watch, especially in the scenes when all of the men are in the bunkhouse. Kudos also go to costume designer Jamie Bullins and fight choreographer Christen Orr.

Steinbeck’s novella, which was written to be both prose and a script for a play, derives its title from a line in Robert Burns’ poem “To A Mouse”:  “The best laid schemes of mice and men / Often go awry / And leave us nothing but grief and pain.” George wants nothing more than to be his own boss and get out of the unstable lifestyle of a migrant worker. But as Crooks points out, a lot of men have had the same dream and failed. In 2016, the computer screen is the new bale of wheat, and everyone seems to dream of a way out, but few make it. Here, Steinbeck captures the American spirit and the fierce desire for independence, but unfortunately the stakes do not reach their acme in Serenbe’s production.

In this work, Steinbeck also addresses race, domestic violence and mental illness in a time where black people were still considered three-fifths human and the mentally ill were locked away. One of the most profound moments of the play occurs when Lennie and Crooks talk in the stables. Crooks asks Lennie how he would feel if he was forced to sleep outside and unable to enter the bunkhouse because of his skin color. Lennie, who in another time would be classified as mentally retarded, cannot quite comprehend racism, but he does know that he is unlike other people because of his superhuman strength and inability to control his impulses. Lord does a nice job with this scene and this is one place where the lead actors deliver.

It is sometimes difficult to relate Steinbeck’s writing to urban audiences, especially because there are a lot of works in the contemporary canon about America before slavery and after World War II. The years between 1865-1940 are harder to find onstage. In Of Mice & Men, his message gets at the core of human nature and is a reminder of the period in history that made America. Though there are some acting fumbles in Serenbe Playhouse’s production, a visit to the charming Serenbe community makes the hour drive worth it, just be sure to bring a fan and some insect repellant.