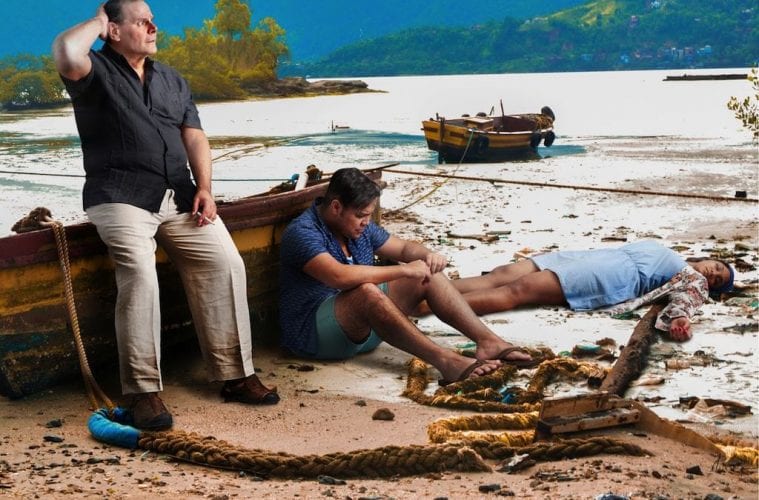 Three refugees from Cuba take their chances on a makeshift raft in search of a better life in the United States in Nilo Cruz’s play Pais de Bicicleta directed by Georgina Escobar in a production at Aurora Theatre through April 30.

The play opens as Julio (Anthony Rodriguez, who is also artistic director of Aurora Theatre) begins to recover from a stroke with the help of his young friend Pepe (Juan Carlos Unzueta) and his new assistant Inés (Limara Meneses Jiménez). As Julio deals with the challenges and frustrations of a slow and painful recovery, the three often discuss leaving their native Cuba.

Though for much of the play escape seems like a distant dream due to Julio’s immobility, his eventual improvement and renewed sense of hope suddenly turn the distant dream into a real possibility. Midway through the play, the setting shifts from Julio’s home to a raft at sea. The journey proves far more difficult than anticipated, as the three of them, adrift for days, begin to suffer from dehydration and hallucinations.

The play moves well between what opens as a domestic drama and then develops into a tale of survival before finally moving, unexpectedly, into an ending that has touches of magic realism. But a sticking point in the play is our difficulty in understanding what motivates such a drastic and risky escape. Audiences understand that many people in Cuba in the early nineties suffered terrible deprivations and attempted the sort of dangerous journey that the characters in Pais take on, but the challenges of living through lean times in Cuba as dramatized in the play seem moderately frustrating and mildly unpleasant, not life-diminishingly awful.

Pepe complains that Cuba is the hopelessly backward “country of bicycles,” where the buses don’t run due to fuel shortages, and Inés says she feels constantly hemmed in and imprisoned by the sea, which, on an island, she finds blocking her path in every direction. But the play never leads us to a more profound understanding of why these characters’ particular situations merit a life-risking journey of total separation from home and country. In Inés’ lyrical speeches, it almost sounds like a simple desire for a change of scenery.

We end up wondering most especially why the three of them — Inés and Julio are newly introduced to each other at the opening of the play — are so quick to cast their lot together. It’s an intimate story, but the three characters seem to have almost no other relations or connections to other people outside their tiny new circle. Strangely (or perhaps understandably), after four days at sea, as they become hopelessly lost, they start to long for home. Cuba for them, it seems, was the lyrical land of flowers in bloom, strong hot coffee, terraces in the morning sun and so on. In the end, the journey seems more ill-considered than tragic.

Jiménez brings a wonderful poetic quality to the pretty and dreamy Inés, Rodriguez does a nice job of limning out Julio’s profound frustration with his own helplessness and Unzueta’s Pepe has a believable, likeable, puppy-like devotion to both Julio and Inés. The story of Julio’s recovery, the developing friendships (and eventual love triangle) between the characters and the disastrous journey are all nicely rendered by the cast. Pais de Bicicleta is mostly a quiet, intimate play, but things, especially as the hallucinations multiply, can often get too shouty, and there are too many dreamy interscene dance sequences threaded throughout.

The play is part of Aurora’s “Teatro Aurora” series, which produces plays in Spanish with English supertitles. Although I’m an opera fan, and I’ve seen many foreign films, this was my first live play where I depended on supertitles. I was a little concerned going into it that looking back and forth between the actors and the translations would be disruptive, but it turned out to be a cinch. The whole setup seems to fade away as the drama unfolds; it’s nothing to fear.

But in the end, though Cruz’s singular play moves impressively from domestic drama to social relevance to magic realism (in 90 minutes), it’s never completely successful in any of those realms. It’s hard to feel a deep sense of connection to the characters or their situation when the motivation for their central act, which turns out to have such terrible consequences, remains elusive, and the characters themselves so strangely unconnected to people outside their small realm. It’s a touching tale, inventively told, but it’s ultimately not a moving or satisfying one.