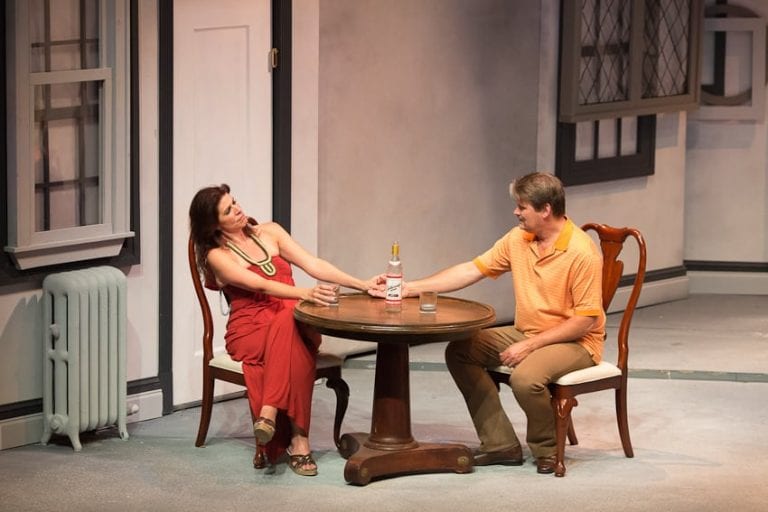 “It’s all over,” says Emma (Tess Malis Kincaid) toward the beginning of Harold Pinter’s “Betrayal,” at Aurora Theatre in Lawrenceville through October 28. It may seem an odd thing for a character to say in the opening scene of a play, but here it suits perfectly. “Betrayal” tells the story of an affair from end to beginning, taking us backward in time, scene by scene, year by year, starting with an awkward reunion a few years after the affair’s dissolution and ending with the initial seduction.

It’s a great play, and it’s fantastic that Aurora would take on the challenge of producing such work. The Nobel Prize-winning British playwright is no lightweight, and his tone — full of the ambiguity of everyday language that somehow both conceals and reveals a dark, troubled interiority — is famously hard to capture. And even if captured, it can be a tough sell to audiences. But director Freddie Ashley and the small cast of three dive right in.

At the play’s opening, Emma, her husband Robert (Anthony Rodriguez) and his best friend Jerry (Mark Kincaid) all know everything: Emma and Jerry have been having an affair, and Robert has been likewise betraying Emma with a number of women for years. As we rewind through the years, we see how the threads of this tangled web of deception extended into nearly every aspect of the characters’ lives. Even when they’re in the dark, they suspect and speculate about who knows what.

Tess Malis Kincaid handles Pinter’s weighty, almost sculptural use of everyday language most impressively here. Characters in Pinter plays discuss the weather, a tablecloth, a book they’re reading or a vacation, but there’s always a vast landscape underneath the seemingly banal surface. At the end of the affair, as Jerry and Emma decide to call it off and vacate the flat they’ve been using for their trysts, she asks him, “What will you do about all the furniture?” In Kincaid’s reading, it’s heartbreakingly clear that she’s not really asking about the tatty couch. Pinter knows that there are simply some questions we don’t dare to articulate, and Kincaid captures the sort of dark fears that underly the question.

The action is set in London, and the actors handle the British accents well, but there’s a resulting overall stiffness and formality to the performances. The characters are upper-middle-class London intellectuals in the late 1960s and the ‘70s, a fast-moving, agile, smart, self-aware and jazzy set. But here they often end up sounding like stiff-upper-lip, turn-of-the-century aristocrats from “Downton Abbey,” which doesn’t suit the play. It’s a small thing, but cumulatively it becomes a large problem. If Pinter’s dialogue loses its dangerous, scary, contemporary, creepy edge, it really can become just a bunch of people discussing the weather.

Mark Kincaid and Rodriguez depict the old friendship well — its lingering jealousies, its “hail fellow” familiarities. But the action takes us back to 1968, when the characters are supposed to be in their late 20s, and there’s a crucial element of youthful carnality and exuberance that’s missing from their performances.

Rodriguez does an excellent job of capturing Robert’s resentment, his simultaneous knowing and not knowing, the cruel way he slowly lets Emma on to the fact that he suspects, but we rarely get the sense of what’s behind all that anger. It goes without saying that he’s angry about being betrayed by wife and friend, of course, but we rarely get a sense of what’s at the root of his love for them that makes the betrayal so utterly devastating.

Set designers Isabel and Moriah Curley-Clay, who thankfully are designing more and more for Atlanta theater, are as brilliant as ever here. Their overlapping doors, chandeliers and window frames not only suit the play’s multiple settings — a Venice hotel room, a London flat, a pub, a fancy Italian restaurant — but they also evoke the dreamy layers, the multiple possibilities and meanings, of the words and actions themselves. They handle the costumes with less facility. An ascot for Jerry at the beginning is all wrong. When we find ourselves in 1968, Tess Kincaid suddenly looks ready to jump up onto a go-go box and do the swim on “Laugh-In,” in groovy boots and miniskirt. It’s too literally “London” and “the ’60s.”

All in all, “Betrayal” seems like a great exercise for actors, designers and director. It’s fantastic to see this talented group cutting their teeth on this material, and when it all works, it’s very impressive. But in the end, the problems keep the thing from lifting off the ground, and audience members who aren’t excited by the dialogue’s dark interplay between surface and interiority may leave just scratching their heads, wishing they could go back in time and see something else.