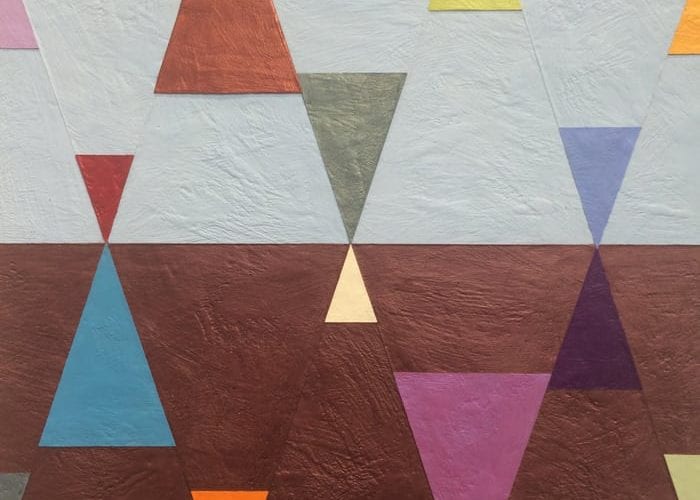 It is tempting to argue that the lowercase “august” in august geometry, at Marcia Wood Gallery through September 5, signifies not the month but the adjective that means “marked by majestic dignity.”

However, there is something more antic than august about this exploration of geometry that is, by and large, anything but straight-edged. This inspired group show is situated somewhere between a trip into non-Euclidean spaces and the sort of mathematical surrealism Lewis Carroll inserted into Alice in Wonderland.

There is similarly conceptual comedy in comparing Scott Eakin’s Broken Color Series #19 and with Joanne Mattera’s Bask (Uttar 291). In his composition of tightly composed rectangular forms, the hard-edged rectangles are filled with painterly brushwork that decorously stays within the lines. In hers, the stacked rectangles are drippy, irregular, and as far from geometric precision as you can get without abandoning geometry altogether. Justin Rabideau’s Tucked Away, a wall-hung sculpture of yellow and blue wood slats and hanging strips of orange plastic, is tucked between the rectangular works by Eakin and Mattera. The work mediates between these two wildly variant regular forms by transferring their regularity into an assemblage that explodes the rectangle into a barely controlled balance of forces.

Gundrum Mertes-Frady’s High Wire is really the only homage to traditional geometric painting in the exhibition. Even there the combination of metallic pigment and slight irregularity of form produces a dynamic that is delectably off balance even as it maintains opposing tensions. Its restrained, if unconventional, palette also stands out among the other artists’ wild range of color choices.

august geometry is best experienced as a single extraordinary installation before it is contemplated in terms of individual works. But this is a hard trick to pull off: We’re presented with too many individually distracting tours de force. Frances Barth: This is “hideaway”, 2014, acrylic and ink on gesso wood panel.

At the opposite end of the exhibition and of the emotional spectrum is Frances Barth’s This is “hideaway.” A cleverly (im)balanced concentration of painted vertical forms at the left-hand side is counterbalanced by a large pink rectangle. It perches atop a tilted horizontal rectangle that appears to be tipping down from the weight of the shape it supports.