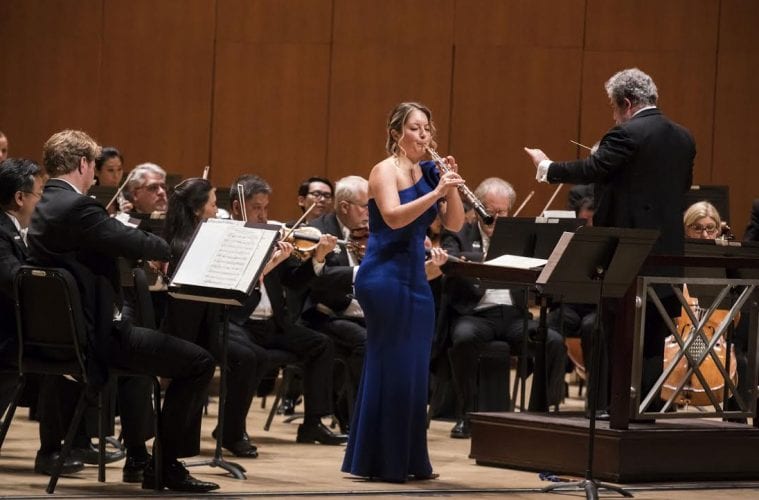 On Thursday evening at Symphony Hall, the Atlanta Symphony Orchestra performed a concert of music by Prokofiev, Mozart and Beethoven, led by guest conductor Carlo Rizzi, with ASO principal oboe Elizabeth Koch Tiscione as featured soloist. The program will be repeated tonight at Morgan Hall in Kennesaw State University’s Bailey Performance Center, then again on Saturday night and Sunday afternoon at Symphony Hall.

The program was tied together by a theme of 18th-century “classicism,” more specifically “the spirit of 18th century composer Franz Joseph Haydn,” whose music, nonetheless, did not appear on the program. His influence – more accurately, the aesthetic notion of classicism in music – was represented by proxy through the music of Mozart, Beethoven and Prokofiev.

The term “classical music” is itself a somewhat ambiguous and maligned umbrella term, but what we’re really concerned with here is the notion of “classical era” in the history of Western art and music, and its precepts (order, balance, symmetry, simplicity and reason over unbridled emotion) are best viewed as parallel to the height of the Age of Enlightenment in general history and philosophy. Typically, the classical era is described as the period between the death of J.S. Bach in 1750 and the onset of the romantic era in the early 19th century.   That classical era in music also paralleled a high neoclassicism in the visual arts, posturing those same ideals of order and symmetry as “rediscovered” ancient Greco-Roman ideals applied to art and architecture, though it was preceded by a similar “classical” art movement in the 16th century, and itself was revived on-and-off into the 20th. Western art music itself would have to wait until the 20th century for an aesthetic trend that would label itself “neoclassical,” and that brings us to Prokofiev.

The first work on Thursday’s ASO program was Sergei Prokofiev’s Symphony No. 1. Written in 1917, it is one of a handful of works of those World War I years to become regarded as a precursor of neoclassicism. No less than Stravinsky would take up the neoclassical ideological cudgel just a few years later with his ballet Pulcinella, basing it on themes putatively composed by the early 18th-century composer Giovanni Battista Pergolesi, and would settle into that ideology between the two world wars in contrast to his more expansive, raucously Russian primitivist ballets like The Rite of Spring.

In contrast, Prokofiev thought the stylistic exercise of his Symphony No. 1, nicknamed “Classical Symphony,” was a passing fancy. It was a kind of homage to the later, mature 18th-century classicism of Franz Joseph Haydn — thus the tie-in with Thursday night’s ASO program’s putative theme — and to some extent that of Mozart. Rizzi, who is best known for his work as a conductor of opera though he has a firm foot in the symphonic concert repertoire as well, led the ASO in a brightly dazzling performance of Prokofiev’s Symphony, which, like Haydn’s music, is a bubbling font of spunk and wit. One could hear easily all of the nods to Haydn’s style, but Prokofiev’s own personality stood shoulder to shoulder with that of Papa Johann, especially in the handling of harmonic language, which is no mere imitation of the classical common practice. After all, every neoclassicism throughout history, in whatever discipline, has selected only some of the stylistic elements of wherever models it emulates and ignores others. So what the audience got under Rizzi’s baton was 15 minutes of a century-old symphony that felt as fresh and new as if it were born yesterday.

It was a reasonably natural segue from Prokofiev to Wolfgang Amadeus Mozart’s Oboe Concerto in C major, composed in the spring or summer of 1777. The very next year, Mozart would rework it, pitched up a whole step, into a concerto for flute in D major. Both versions are considered among the more important concertos in the respective repertoire of each instrument.

Elizabeth Koch Tiscione, the ASO’s principal oboist, was soloist. Tiscione’s performance of the light and nimble solo part was beautiful, but there were times where it was hard to hear her, despite the orchestra’s obvious efforts to keep the dynamics down during her featured passages. The odd thing about the Symphony Hall stage, despite the current acoustical shell which allows the musicians to hear each other better, is that where a soloist stands is critical, and moving two feet in any direction makes a difference in the presence of the soloist’s sound out in the hall.

Word from insiders says that the farther downstage, the better for the soloist. My own experience from the audience is the critical point is the proscenium line, and that standing forward of that line is the more advantageous. Despite the difficulty hearing her at times, Tiscione’s playing was lovely and extremely well received by her many fans with an enthusiastic ovation. As one audience member cheerfully said at the end: “We love our Liz!”

The classical theme continued after intermission with Ludwig van Beethoven’s Symphony No. 2, written mostly in 1802 and premiered at the same concert as the debuts of both his Piano Concerto No. 3 and his oratorio “Christ on the Mount of Olives.” Aside from the fact that Beethoven was a student of Haydn, the Second Symphony ties into the evening’s theme by being among the last works of his “early period,” when he was trying to find his place as pianist and composer is Viennese society, and yet he had developed his own personal voice.

Rizzi and the orchestra gave Beethoven’s long-winded symphony a bold reading, with an energy that was exemplary of a potent musical personality ready to hatch out of its old shell into something new and promising.