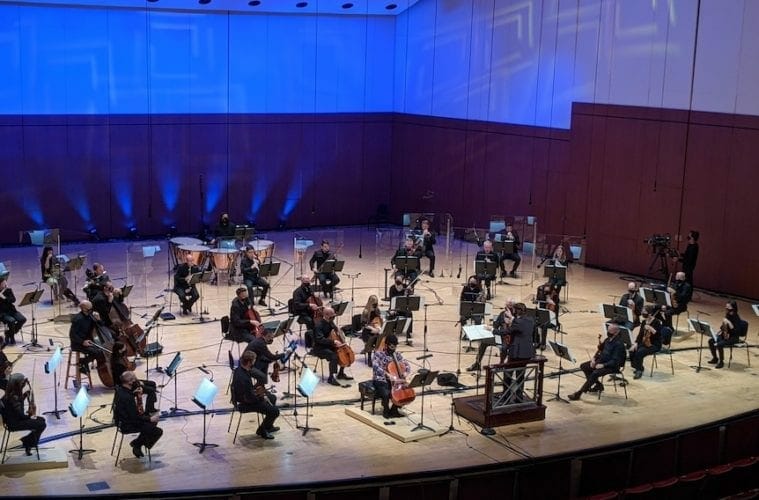 It’s commendable that the Atlanta Symphony Orchestra seeks to showcase the new and avant-garde. Such initiative is crucial for any symphonic ensemble that wishes to remain relevant in the modern world. Such was the case Thursday night when a live ASO webcast ASO featured work by 2017 MacArthur Fellow  Tyshawn Sorey, a world-renowned multi-instrumentalist.

The Symphony Hall program, under the baton of guest conductor Maxim Emelyanychev, is available online to ASO Virtual Members. (Emelyanychev performed with mezzo-soprano Joyce DiDonato at Emory University in one of 2019’s most memorable shows.)

Sorey’s career reads like a who’s who of the avant-garde. His résumé includes performances with John Zorn, Marilyn Crispell and Roscoe Mitchell, among many others. His ASO piece is titled “For Roscoe Mitchell.”

It was the second of three pieces on the program, along with “Fantasia on a Theme by Thomas Tallis” by Ralph Vaughan Williams and Symphony No. 103, “Drumroll,” by Joseph Haydn. It is perhaps for this reason that Sorey’s work didn’t resonate. Vaughn Williams and Haydn, while boundary pushing in their own right, simply don’t have the defiantly discordant nature of Sorey’s brazenly atonal composition. Thus, Sorey’s piece stuck out like a sore thumb.

“Fantasia on a Theme by Thomas Tallis” began the evening in fine form, with Vaughn Williams’ evolution on the music of Tallis leaping nimbly from a single, maudlin opening melodic line into lush, majestic chordal cascades. This work was easily the highlight of the evening.

Then came “For Roscoe Mitchell,” a tribute to a Sorey colleague and collaborator. The work is aggressively opposed to traditional compositional conventions. The disparity between “For Roscoe Mitchell” and the intoxicating Vaughn Williams piece felt almost unendurable — like being yanked from a pleasant dream and dropped into the hellish trenches of World War I.

The work, Sorey says in his program comments, was a nod to Mitchell and a meditation on the tumultuous year that was 2020. To that end, the piece succeeds: It is deeply tense and unnerving, with pensive, sustained notes that seem to drift painfully in and out of one another. There is, perhaps, no more apt sonic description of the daily endurance of the chaos and confusion that has come to define the year.

Is “For Roscoe Mitchell” an enjoyable listening experience? Not really. It stabs at melody throughout but doesn’t seem to go anywhere. These errant phrases are stated and abandoned and left to drift into the tedious abyss of the accompanying drones.

Left to wonder what deeper understanding could redeem the piece, I was reminded that Sorey has performed extensively at the Stone, John Zorn’s legendary New York avant-garde jazz venue. That’s where his work belongs, sharing the stage with Zorn projects like Masada and Naked City. Placing him between Vaughn Williams and Haydn feels like dropping a Basquiat canvas between Renaissance masters or interrupting a performance of Hamlet with beatnik poetry.

For its part, the Haydn work was well placed. It returned the listener to the realm of melody but was boisterous and virtuosic enough to serve as a sort of balance point between the preceding works.

Any foray into the avant-garde is a delicate matter, especially when such a work is bookended by classical masters. While the ASO is right to perform such works, it would be more appropriate to pair Sorey with more extreme avant-garde composers like Edgar Varese or John Cage. This evening’s program simply didn’t provide the proper context.