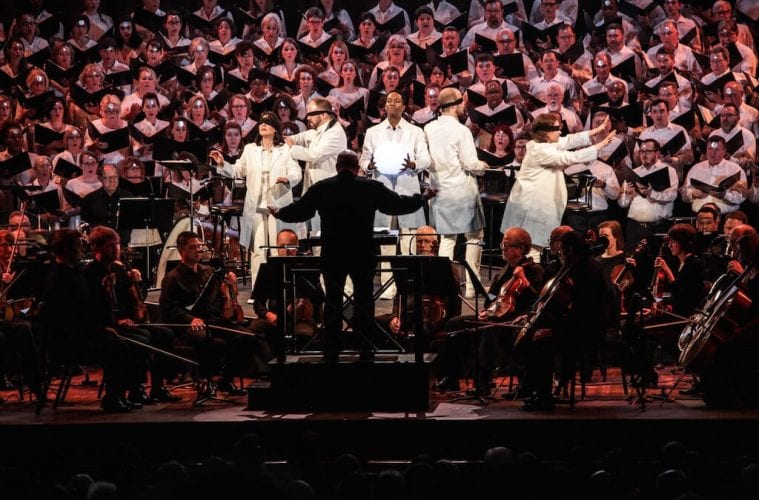 Last week, the Atlanta Symphony Orchestra and Chorus went to Washington D.C. for a concert and a series of related events that added up to a “residence” as part of the new Shift Festival, whose aim is to examine and upend the relationship between orchestras and their communities. Each of the four orchestras in the festival presented a concert at the Kennedy Center, surrounded and enhanced by smaller community engagements.

According to Deborah Rutter, president of the Kennedy Center, “these four orchestras have done a brilliant job of understanding who they are, where they perform and for whom they perform. Each is unique and each displays this identity they have developed through the programs they are bringing here.”

The festival’s name is not an acronym. Rutter says it suggests the “shift” that is occurring as orchestras move from old stereotypes to “where orchestras really are today [in terms of] the role of the orchestra in the community.”

I spoke with Jenny Bilfield, president of Washington Performing Arts, which co-sponsored the festival together with the Kennedy Center. She highlighted the importance of the festival’s many community events, which mirror the “connection within communities” and “the different paths the orchestras have chosen to engage with their audiences back home.” Bilfield also stressed the importance of the “festival vibe” and the more casual nature of the events, so the audience isn’t intimidated about “when do I clap?”

Still, it’s the main stage Kennedy Center concerts that drew the most attention and audience, and here each orchestra took a totally different approach. First up was the Boulder Philharmonic (March 28), a concert I was unable to attend but which was clearly focused on the natural world. The centerpiece was a performance of Aaron Copland’s “Appalachian Spring,” enhanced with a group of aerial dancers who performed while dramatically suspended above the stage on ribbons and hoops. I gather the risk of a dancer being impaled on the neck of a cello added to the intrigue of the evening. Their concert also included a mandolin concerto by Jeff Midkiff and a new work from Stephen Lias.

On March 29, we got the North Carolina Symphony, which brought a “Tarheel-themed” concert: each piece was inspired by the Carolinas. We heard a couple of pieces by the late Robert Ward and two recent commissions, including “Lo” by Caroline Shaw, an unusual work that explores the relationship between violin soloist and orchestra. The composer performed her own violin solos, with considerable improvisation. The program also included “Rusty Air in Carolina,” an intriguing work from fast-rising composer Mason Bates, who incorporated electronic nature sounds into a paean to the Carolina countryside.

The Knights, a plucky Brooklyn chamber orchestra that refers to itself as an “orchestra collective,” performed the festival finale on April 1. They were joined by the San Francisco Girls Chorus for two pieces, including “My Outstretched Hand,” a deeply touching piece based on the writings of a 19-year-old Montana girl from 1902. Its composer, Lisa Bielawa, is director of the chorus. When this ensemble sang Vivaldi’s Gloria in D major, it was one of the rare times the popular work has been sung as written: Vivaldi had composed it as an exercise for the choir of a girls’ orphanage where he was working. 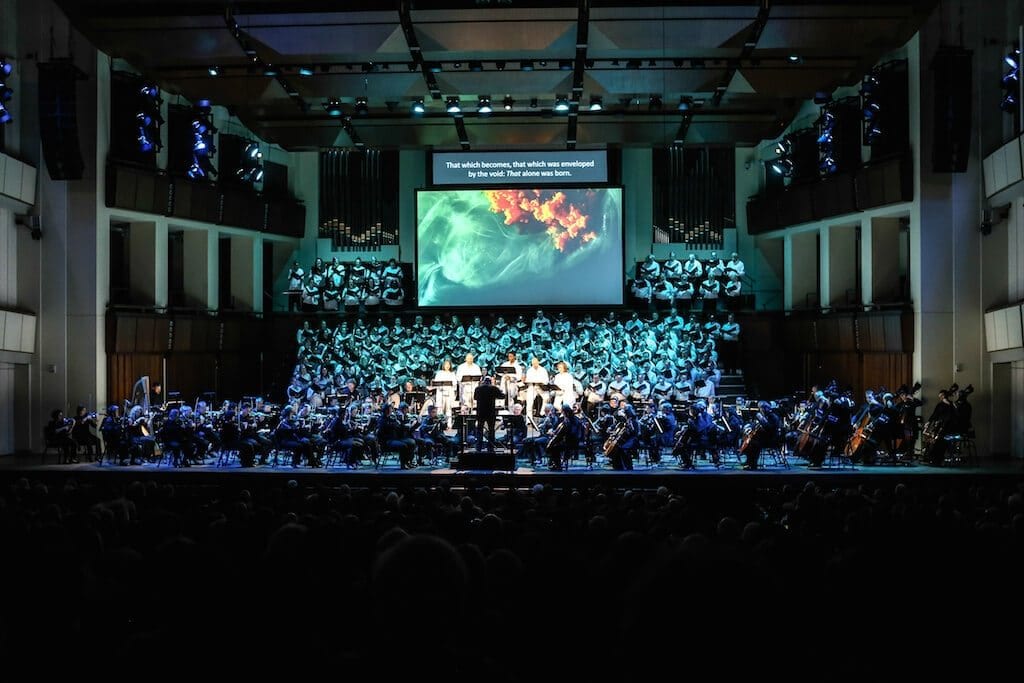 The ASO and Chorus performed “Creation/Creator,” a piece commissioned in 2014 from composer Christopher Theofanidis.

The ASO, which took the stage March 31 — along with its gigantic 200-voice chorus and a full complement of soloists — operates at an altogether different scale from the other three orchestras. And though this contrast was apparently intentional (the festival’s organizers simply wanted to highlight a range of ensembles), the effect was dramatic, intensified both by the size of the audience (the ASO’s was the only main stage concert that came close to filling the Kennedy Center’s giant concert hall) and by the ASO’s decision to stage its blockbuster 2014 commission, “Creation/Creator” by Christopher Theofanidis.

Revived at Symphony Hall in recent weeks and reviewed by ArtsATL at its premiere as well as the revival, “Creation/Creator” is an immersive and reflective work whose examination of the creative process makes it a metaphor for the ASO’s stellar leadership in terms of new works.

Another virtue of Theofanidis’s masterpiece is that it shows off the ASO’s unique asset, its mighty chorus. In a backstage chat during the Washington rehearsal, Evans Mirageas, the orchestra’s suave spokesman and strategist, described them as “the finest amateur chorus in America.” This might be a rare case of understatement: I think if you deleted the word “amateur,” the description would still hold. But Mirageas was making an important point: they do this for no pay. 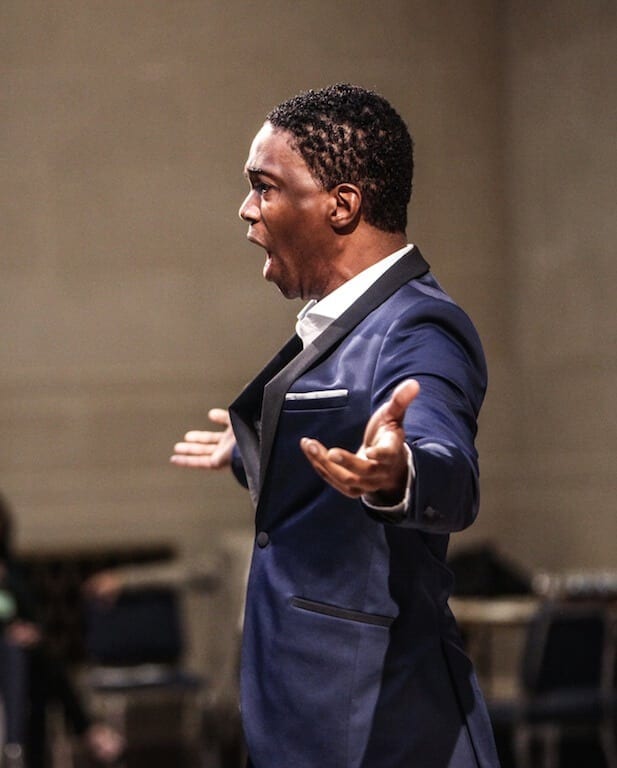 Baritone Nmon Ford sang his own original composition, “Dov’è l’amore” with Spano at the piano.

“Creation/Creator” is a challenging work for everyone involved, and on this occasion orchestra and chorus were clearly on fire. Robert Spano, ASO’s music director, shaped the giant work nicely and gave it a sweeping momentum. It was a happy night all around, especially for the large contingent of “road trip groupies” who made the trek from Atlanta to cheer their beloved orchestra.

On the previous night, the seven vocal soloists from “Creation/Creator” were featured in a dandy concert at the palatial and resonant National Gallery of Art. Each chose a few songs related to the creation theme, with Spano accompanying them on piano. The decision to let each of these articulate singers introduce their choices had the effect of humanizing them. Baritone Nmon Ford sang his own original composition, “Dov’è l’amore,” a sweet neo-romantic work that showed off his voice well. Soprano Jessica Rivera sang a cycle of three potent German lieder written specifically for her by Spano, showcasing her expressive talent.

On Saturday, the final morning, Spano and Norman MacKenzie, ASO director of choruses, led a conducting workshop for area choral directors, joined by volunteers from the ASO Chorus.

Asked about the impact of being chosen for this festival, Spano responded, “For us, it’s a confirmation of identity. We pride ourselves in doing interesting things, or familiar things in interesting ways . . . exploring the new and different. It’s significant that what we do on a regular basis is of interest to the Shift Festival. We try to engage where we live with the variety of what we do, recognizing that we have multiple audiences . . . traveling around the state, but also offering different things that bring different audiences and communities to us.”

It costs the earth to move such a large ensemble to Washington, even if a portion of the cost was covered by foundations and by [drumroll please!] the National Endowment for the Arts. I asked ASO bassist Michael Kurth about the value to the orchestra of playing on a major road trip like this one. He responded, “It always raises our game. When we’re preparing for a big out-of-town audience at a venue as legendary as the Kennedy Center, it feels that our stature worldwide is heightened and it elevates our esteem. It’s an honor to be invited here, and to be considered innovative and influential.”

This was actually the orchestra’s sixth visit to the Kennedy Center. Perhaps the most auspicious was for President Jimmy Carter’s inauguration in 1977, when Robert Shaw led the orchestra and chorus, joined by the National Symphony Orchestra, in a concert that Washington Post critic Paul Hume called “the greatest inaugural concert in history.” Commenting on the chorus, he added: “If the rest of the country could sing the way these people from Georgia sing, Jimmy Carter’s problems would be over before he gets started.”

This trip took the place of what more recently had become the orchestra’s annual trip to Carnegie Hall. From my conversation with Mirageas, it appears the orchestra won’t be performing outside the South in the 2017–18 season. But he let slip that another trip to Carnegie is in the works for a future year, featuring something “really big.”