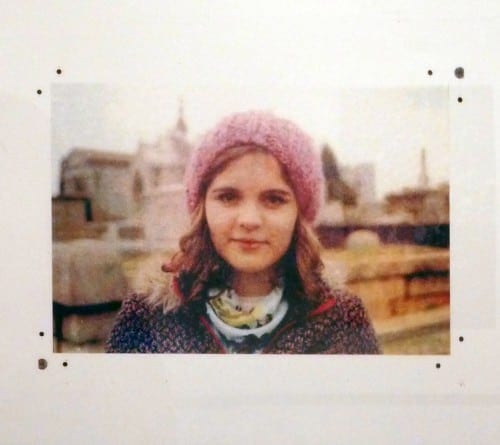 “Head-Space” is a thematic show only by virtue of being about mental space and imagination as they relate to the interpretation of the outside world. All three artists make work that looks as if it could be objective; all three are deeply psychological. But mostly, the exhibition shows off the results of six months of immersion in the arts of printmaking by Atlanta artists whose main means of expression lies in other media. Etching, aquatint and photogravure made possible some explorations that wouldn’t have been feasible otherwise.

Ann Stewart produced versions of her diagrammatic networks of intersecting lines in which the relationship of black and white is reversed. This departure from her usual practice was originally inspired by the exercise of drawing with white chalk on black paper, media in which her meticulously intricate precision would have been difficult if not impossible.

Patrick Di Rito produced ghost prints, ever more faint images produced from the residual ink left after the first impression of a printing plate. These haunting (sorry, but the metaphor fits) versions of photos from his 365 project — a photograph a day — replicate for him the elusive qualities of the dreams he has taken to describing and interpreting.

Jason Kofke’s pieces are much closer to the drawings for which he has become known, and they could have been executed in that medium. Whereas Di Rito’s transformations of his photographs turn objective-looking documents into subjective experience via transmutations of the photograph itself, Kofke produces intaglio images drawn from vintage photographs that capture some essential quality of a historical moment.

All of them are moments of past technological progress reproduced through a technique that is even more outdated by present standards of technical reproducibility. (Kofke doesn’t allude to Walter Benjamin’s famous essay “The Work of Art in the Age of Its Technological Reproducibility,” but he could.)

Whether the print in question depicts a cosmonaut or intensely focused children at keyboards, each work represents Kofke’s personal sense of how a photographic moment sums up what is most emotionally captivating — for the original participants or for Kofke — about some aspect of a past era.

For those who may not be able to view this small show before July 31 (there are reports that it may be extended by a few days), photographs of the works are posted on Facebook on the Atlanta Printmakers Studio page.