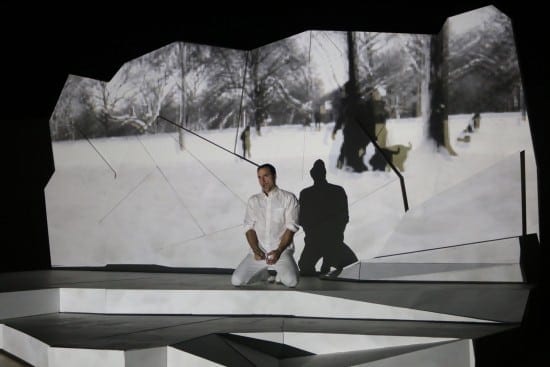 This past Saturday evening, the Atlanta Opera presented a staged multimedia performance of Franz Schubert’s 70-minute song cycle, Winterreise, a setting of 24 poems by Wilhelm Müller. The production by New York City-based arts collective GLMMR, which fuses the worlds of fine art, audiovisual technology and live performance. The production features baritone David Adam Moore and pianist Earl Buys, with scenery and projection design by Victoria “Vita” Tzykun and Moore, plus lighting design by Maxwell Bowman. Adams and Tzykun are the founding members of GLMMR. The acronym itself stands for “Giving Light Motion + Memory + Relevance.”

In the course of his brief 31-year lifespan, Schubert did write music for operas and singspiels (musical plays with spoken dialogue between numbers), but his mark on music history primarily rests with his oeuvre of over 600 songs, mostly lieder — the pillars of which are his two great song cycles set to Müller’s poetry, “Die schöne Müllerin” (1823) and “Winterreise” (1827). Both are based on collections of separate poems featuring a common theme and dramatic narrative.

Thus the 24 beautiful but mostly emotionally gloomy songs of Winterreise have long been ripe for potential visual and theatrical enhancement, the duration of its uninterrupted monologue falling within reasonable boundaries of a long, one-act, opera-like presentation.

First and foremost, the production tightly defines its physical dramatic space with a self-contained, somewhat “pocket” set which combines a multi-tiered platform with a rigid, irregular backdrop that rises up from the base, emulating an abstracted wall of jagged, broken sheets of ice. The standalone set is much smaller than Morgan Hall’s available stage area. The advantages include being on real human scale, so it does not dwarf the singer, and allowing the production to be effectively mounted in smaller alternative spaces.

This entire set, platform and back wall combined, served as the surface upon which the visual elements were projected, their outermost borders matching the limits of the set’s own irregular shape. It was within and through these projections which Moore sang and acted. Moore has a likable baritone voice, which he can mellifluously float in its upper range when warranted. He sang in the original German, with English translation projected as supertitles. Pianist Buys, positioned off-set on stage right, proved an accomplished, engaged collaborator.

Much of the projected visual design focused upon themes of ice, snow and the state of water on the tenuous edge of freezing or melting landscape principally rendered in stark greyscale. Color, especially bright color, was the rare exception, typically coming in isolated points of focus, such as a solitary green blade of grass, or in greatly muted tones of graveyard scenes. The few instances of full-blown color, associated with dreams and illusions, could almost startle by contrast: kaleidoscopic renderings of brilliant flowers, the lurid liquid neon hues of greatly out-of-focus scenes in a New York City strip club.

The production’s visuals also consciously brought the songs into a 21st century context – automobiles, clothing, cell phones (summarily executed with bullets and hammers), a traveler’s strewn baggage contents — in addition to timeless visual elements aplenty. There were also city, suburban and open ice-covered road scenes, some of which included time-lapse photography or accelerated motion. Especially telling was “Einsamkeit” (“Loneliness”) for which imagery was pedestrians on crowded city sidewalks — for there is little more lonely than the loneliness found within a crowd.

Concert song, as a purely musical practice, breaks the theatrical fourth wall by default, because the singer must always communicate unmediated with the audience. But the staging and design allowed Moore at times to directly interact with the projected images behind him, to good effect.

While there were some debatable shortcomings, they were few. The most difficult for the average modern audience being the overall duration of the primarily angst-filled emotional sentiments — the ending, too, is somewhat sedate. Nevertheless, this Winterreise offers up some fresh ways of approaching Schubert’s masterpiece which feel quite relevant to our times.