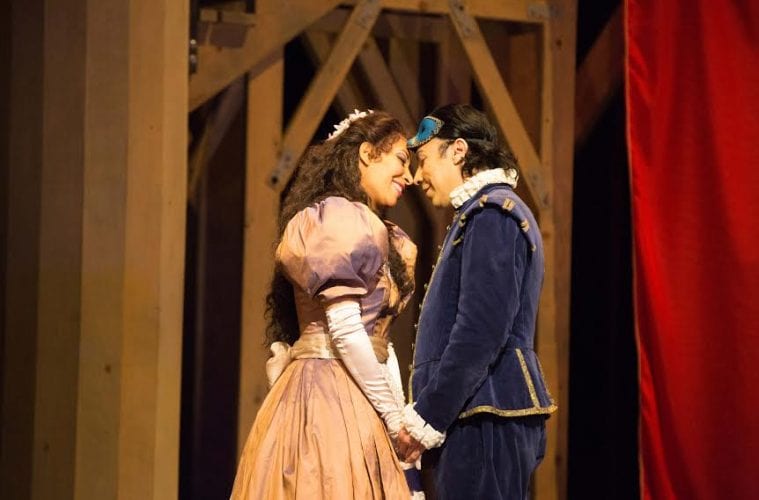 Review: The Atlanta Opera uses a strong cast for new twists on “Romeo and Juliet”

This past Saturday evening at the Cobb Energy Performing Arts Centre, the Atlanta Opera opened its final production of the season, Romeo and Juliette, by 19th-century French composer Charles Gounod. The opera will be performed again this Tuesday and Friday evenings, and Sunday afternoon.

A performance of Romeo and Juliette has not been seen on the Atlanta Opera stage since 2007. This one is an entirely different production. Gounod’s opera is in five acts, sung in French, with a libretto by Jules Barbier and Michael Carré that adapts Shakespeare’s play from a decidedly French romantic perspective. The emphasis is far more on the star-crossed lovers, and does not at the end resolve the feud between the Capulet and Montague families, ending instead with the deaths of the young lovers.

The two romantic leads in this production are tenor Jesús León as Romeo, making his Atlanta Opera debut with these performances, and soprano Nicole Cabell as Juliet. Cabell made her Atlanta Opera debut in 2010 in Mozart’s The Magic Flute and was subsequently heard in a 2011 performance of Mahler’s dark Symphony No. 2 (“Resurrection”) with the Atlanta Symphony Orchestra led by principal guest conductor Donald Runnicles.

Cabell showed her fluid vocal agility early on in the middle of Act I with her arietta, “Je veux vivre dans le rêve” (“I want to live in the dream”), also known as “Juliet’s Waltz,” which requires an ability to sing not only rapid acrobatic passages but also a high D above the treble staff (D6).

León’s tenor is an appealing match for Cabell’s voice, which is a good thing as they have four duets in all over the span of the opera, including the drawn-out death scene in the Capulet tomb at the end. (After all, why should death impede singing in opera?) 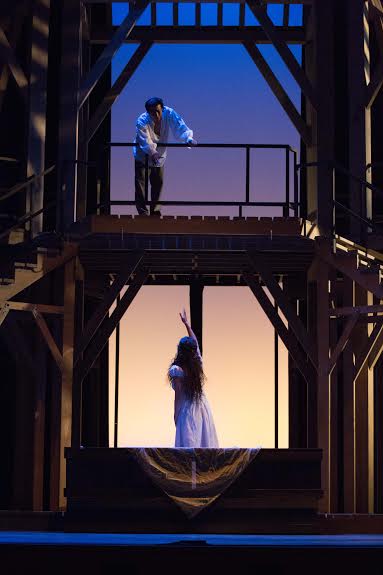 Other notable standouts are baritone Edward Parks as Mercutio, bass Burak Bilgili as an even-keeled Friar Laurence, mezzo-soprano Sandra Piques Eddy in the trouser role of Romeo’s page Stephano, and mezzo-soprano Cindy Sadler making her Atlanta Opera debut as Juliet’s nurse Gertrude — who shares occasional comic interactions with Capulet’s servant Grégorio, sung by bass-baritone Alan Higgs, that imply something is going on between them.

The entire cast is strong in their roles. Bass-baritone David Crawford as the Duke of Verona and tenor Santiago Ballerini as the hot-headed Tybalt are both making their Atlanta Opera debuts. Baritones Cory Neal Schantz, Jonathan L.B. Spuhler and Nick Yaquinto round out the cast well as the Duke of Verona, Benvolio and Paris. The Atlanta Opera Chorus did fine job as well.

Music director Arthur Fagen conducted the performance, which divided the opera’s five acts into two parts, with a single intermission between the two scenes of Act III. Each half of the performance was about 75 minutes in length — a fairly long stretch for audiences, but a better choice than multiple intermissions, which would have made the evening run too long.

As in many productions of Romeo and Juliette, there were some theatrical cuts which are commonly taken. However, this production also added a seldom-included scene, the wedding of Juliet and Paris, where she passes out from having taken the potion given her by Friar Laurence.

Director Tomer Zvulun, who is known to insert theatrical twists that do not impact the music, took dramatic advantage of that division of the five acts into two parts with his stage direction.

The first part opens with a party at the Capulet mansion, and Zvulun has a small group of actor-entertainers in pantomime, appearing to be performing Shakespeare’s A Midsummer Night’s Dream for the guests — another play, albeit comedic, about illusory love. The visual impact also plays well off of Mercutio’s song about the fairy Queen Mab. Zvulun opens the second half (which begins with Act III, scene 2) with the same actor-entertainers involved in another play under Stephano’s chanson, “Depuis hier je cherche en vain mon maitre” (“Since yesterday I seek in vain my master”).

It was a fictional, non-Shakespearean play titled Death and the Maiden, inspired by Pyramus and Thisbe, the play-within-a-play that appears (in crude form) near the end of A Midsummer Night’s Dream. The original Pyramus and Thisbe by Ovid is about the double-suicide of lovers due to mis-presumed death of one, and from which Shakespeare’s Romeo and Juliet is a direct dramatic descendant. In addition, Friar Laurence’s cell in Act III, Scene 1, which concludes the first part with the secret wedding of Romeo and Juliet, seems to pair up with the final death scene in the Capulet tomb at the opera’s conclusion — two lovers united, albeit with tragic end.

The imposing, abstract set designed by John Conklin alludes to the Globe Theatre by its curved symmetrical two-story wooden structure, implying the Globe’s galleries. Two massive fluted Ionic columns and a prominent pair of wooden staircases add to the default symmetry of the set. The sections of the gallery-like structure were movable, however, allowing for different use and appearance, such as Juliette’s balcony or bedroom, or part of Friar Laurence’s cell.

In Shakespeare’s day, the city of Verona was a part of the Republic of Venice, noted for its wealth and economic trading power. The body of Atlanta Opera’s new production sets the story in the 1830s, however, several decades after the demise of the Republic at the hands of Napoleon, when it was part of the Austrian-held Kingdom of Lombardy–Venetia following Napoleon’s defeat. It was also a time when voices for Italian unification were increasing, something accomplished by the time Gounod’s Romeo and Juliet premiered in 1867 — with the region including Verona becoming part of Italy only the previous year.

Johanna Schmink’s costume designs reflect this early Romantic Era setting, conflated with some elements of clothing from Shakespeare’s own day (i.e. ruffs). That’s a creative tightrope to walk, but against Conklin’s abstract, chronologically non-determinate set, the eclecticism worked rather well.