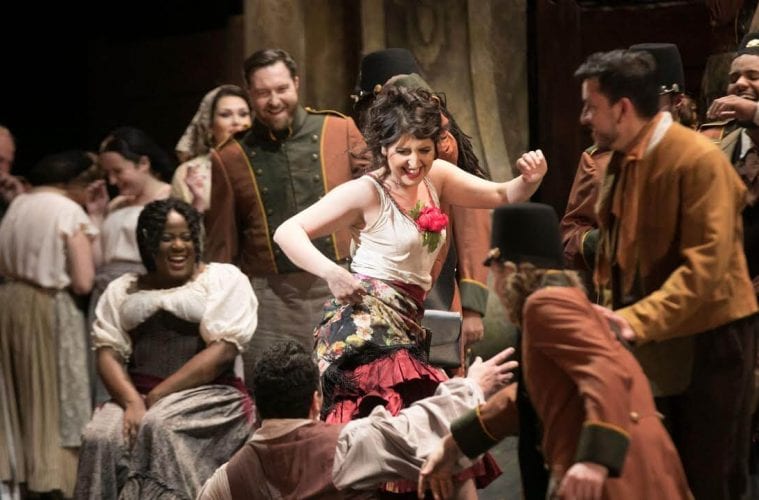 The Atlanta Opera puts a playful, wily spin on the smoldering “Carmen”

The Atlanta Opera kicked off its penultimate main-stage production of the 2017–18 season Saturday night with a traditional operatic favorite, George Bizet’s Carmen, directed by Brenna Corner and conducted by music director Arthur Fagen, with choreography by Amir Levy in his Atlanta debut.

Franco-Armenian mezzo-soprano Varduhi Abrahamyan makes her American and Atlanta Opera debuts in the title role. Tenor Gianluca Terranova, who made his company debut in 2015 as Rodolfo in La Bohème and returned last season as Calaf in Turandot, portrays the hapless Don José. Baritone Edward Parks is the toréador, Escamillo, and soprano Nicole Cabell sings the role of Micaëla — both of whom most recently appeared with the company in 2016 in Romeo and Juliet, as Mercutio and as Juliet. Three more performances of Carmen remain: Tuesday, Friday and Sunday at the Cobb Energy Performing Arts Centre.

With her smoldering, velvety yet agile voice, Abrahamyan portrays the seductive gypsy Carmen as a more playful, wily temptress than vicious vixen, perfectly comfortable with her inconstant romantic forays and the personal liberty that represents: “L’amour est un oiseau rebelle que nul ne peut apprivoiser . . . L’amour est enfant de Bohême, Il n’a jamais, jamais connu de loiloi,” she sings in her signature Habanera while dancing provocatively in Act I. (In English: “Love is a rebellious bird that no one can tame . . . Love is a Bohemian child, who never knew a law.”)

Her toying with the corporal Don José is the continuing catalyst for his emotional degeneration over the course of the opera. Terranova takes Don José down that emotional staircase step by step, a fatalistic path despite opportunities to change course. The first of several thresholds is crossed when, after being ordered to arrest her for a fight with a coworker, Carmen sings and dances a seguidilla, enticing him to let her escape, for which he is demoted and imprisoned for dereliction of duty.

Then there is Escamillo, a bullfighter adored by the public, who arrives to accolades of the crowd. He introduces himself in Act II with the famous “Toréador Song” and sets his eye on Carmen, who brushes him off — for the time being, as she ultimately leaves José for the magnetic toréador. 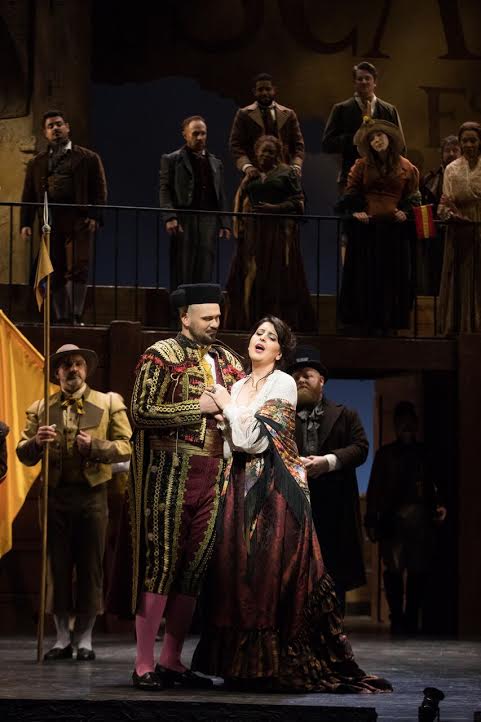 It would be easy to play Escamillo as a shallow rock-star persona, but Parks’ portrayal exudes an intense, unflappable confidence, in both voice and stage presence; even in his infatuation with Carmen, it is unswerving, thus serving as a strong foil to the crumbling character of Don José.

Likewise, the lithe-voiced Cabell’s steadfast Micaëla, a young girl from José’s hometown who is introduced as his chaste and demure girlfriend in the first act, is a symbolic counter to the inconstant Carmen, but in the end is not a sufficient force to deter him from his fate. Her solo aria in Act III, “Je dis que rien ne m’épouvante” (“I say that nothing frightens me”), sung fluidly by Cabell, is a gratifying standout that keeps Micaëla from being limited to a stock opéra comique role.

By the end of Act III, Carmen has become bored with Don José, who by this time is a complete emotional train wreck, having destroyed his job as a soldier and now has the reputation for picking jealous fights, first with his commander, Lieutenant Zuniga (ably sung by bass-baritone David Crawford) and then with Escamillo, both broken up by Carmen’s band of cohort smugglers. Carmen sees a prediction of her death at his hands in a session of fortune-telling with cards.

Rather than a third intermission, the performance segues to Act IV, with its crowd of hawkers working their trade before the lowered curtain, which is finally raised with the pageantry of Escamillo’s entourage entering through the audience to the stage: the flag bearers, picadores, rejoneadores and banderilleros to the fore of the arena, with the matador de toros, Escamillo, the last to proceed in the festive scene. After the crowd has moved into the arena at the back of the stage, their attention on the bullfight, José and Carmen confront each other. José fatally stabs Carmen, then cries out to be arrested for her death, observed only by a few whose attentions had turned from the bullfight inside the arena.

While much of the story is about the ill-fated, dysfunctional relationship between José and Carmen, it is also about the passions of working-class crowds for magnetic personalities as much as individual attractions, and the crowds in Bizet’s opera play huge roles throughout. With its proletariat-focused story line and intensely flawed principal characters, Carmen is drawn apart from the traditional French opéra comique genre in which it is rooted, and points to the realistic verismo Italian opera that would come in the final decade of the 19th century.

Underpinning the whole production was the Atlanta Opera Orchestra performance of Bizet’s memorable music — led by music director Arthur Fagen — with brisk but never overstated energy whether accompanying featured vocalists, choruses or choreography. The orchestra, together with the fine singing, offered up that special dimension that makes opera something far more than theater accompanied by music.