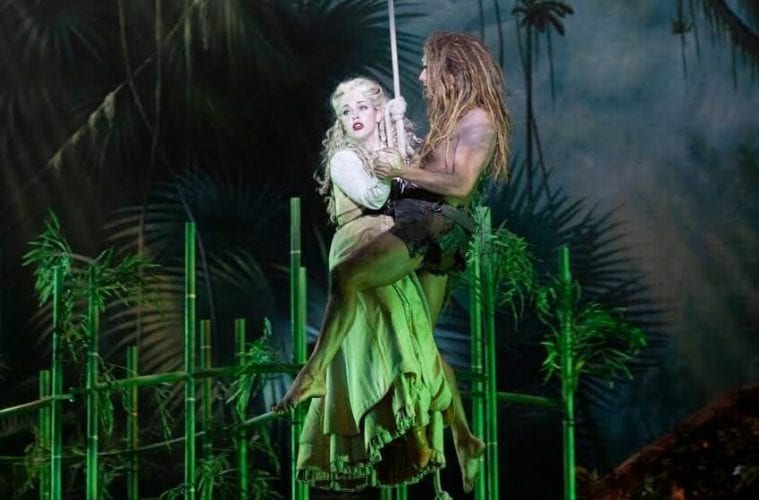 Clad in a loin cloth and swinging carefree through the jungle, Edgar Rice Burrough’s Tarzan character has been a staple of all sorts of pop culture — books, films, television specials — in the last century, as well as the source of numerous parodies. Maybe none of the interpretations, however, have been more unlikely than a stage musical peppered with pop songs by Phil Collins. More than a bit silly, it has no business working, but fortunately no one has told the folks at Atlanta Lyric Theatre that.

A kid-friendly show that is essentially harmless and agreeable, Tarzan runs through June 24 at the Jennie T. Anderson Theatre in Marietta. In fleshing out the story, David Henry Hwang has not strayed much here, nor has he given much depth to some of his characters. In handling the music and lyrics, Collins has written nine songs for this production and tossed in some of his popular ballads.

In a sequence lasting a mere moment or so, an English couple survive a shipwreck and wash up in Africa. They are later killed, but their son (Vinny Montague) survives and is found by Kala (Leslie Bellair), a gorilla whose mate is Kerchak (Marcus Hopkins-Turner, in a role that was originated on Broadway by Tony winner and hometown hero Shuler Hensley), the leader of the primates. Kala takes the infant in as her own son.

As Tarzan grows into a man (played by Stanley Allyn Owen), he is taught by gorilla Terk (Commodore Primous) to survive and is eventually accepted by the other animals. When naturalist Jane Porter (Alison Brannon Wilhoit) comes to the island with her father (Steve Hudson) as part of an expedition, Tarzan meets the young woman and jungle sparks fly. Tarzan is in love. As he learns he is indeed human, he contemplates moving away to be with Jane. What Tarzan doesn’t realize is that some in Jane’s entourage plan harm for him.

For the most part, I tend to enjoy musicals staged by Atlanta Lyric Theatre, one of the only local companies around dedicated solely to musical theater. The company doesn’t have the swagger or innovation of an Aurora Theater or a Serenbe Playhouse, or anything edgy or against-the-grain in their repertoire. Their offerings are old-school musical theater, usually quite reliable. That they can make something out of this is impressive.

Based on the 1999 animated Disney film, the musical version by Disney Theatrical premiered on Broadway in 2006 and closed just over a year later. Its reviews were mixed — some of them quite nasty — and the production wasn’t exactly an awards magnet either. Its sole Tony Award nomination was for Best Lighting.

Yet taken with a grain of salt, it’s something of a guilty pleasure. Credit that to director Robert Adams, who brought flair and theatricality to the company’s Beauty and the Beast last year and has done the same here.

At times, Owen doesn’t have much to do except stand around in a loin cloth and swing around the jungle, but he’s a vocally skilled performer and gets several moments to shine. He’s surrounded by reliable performers such as Wilhoit, Bellair and Hopkins-Turner. Primous camps it up at times but has a splashy, sensory overload Act Two opener in “Trashin’ the Camp,” with all sorts of strobe lights and onstage activity.

Daniel Pattillo’s jungle set does its job without being overly busy, and the costumes by Amanda Edgerton West, lighting by Mary Parker and choreography by Cindy Mora Reiser enhance the production. Handling close to two dozen songs, music director Chris Brent Davis juggles them all, including a swell “For the First Time” between Owen and Wilhoit and a lovely, nuanced rendition of “You’ll Be in My Heart” by Bellair, who has made a habit in recent years of stealing musicals. It’s a shame that there’s no live band, however.

It’s easy to pick elements of the show apart — its thin story, a score that can feel banal at times and lots of swinging through the jungle sequences. It’s big and dopey, indeed, but in the hands of Atlanta Lyric Theatre, it’s a lot more engaging than it has any right to be.