On the face of it, Melvin Edwards and Peter Saul, the artists in the Atlanta Contemporary Art Center’s show “Inside & Out,” could not be more different. 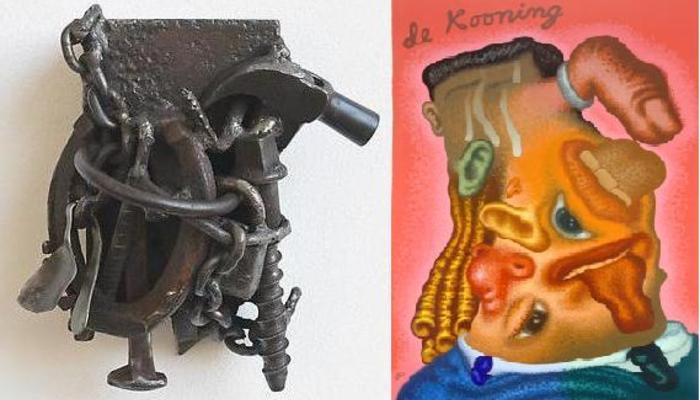 Edwards, a New York-based sculptor, is best known for his lifelong series “Lynch Fragments.” As I wrote in a review in the August 5 print edition of the AJC, these are small “assemblages of found objects — chains, hammer heads and other tools, locks, nails, pointy shards — bent and welded into powerful evocations of African-American history, replete with suffering and hope. They are dense and contained but also dynamic, with pieces jutting into the viewer’s space. Like a beating heart, the sculptures pack a punch out of proportion to their scale.”

Saul plays jester to Edwards’ griot, id to Edwards’ superego. Edwards prefers poetic allusion; Saul is always in your face. In their own ways, both septuagenarians are making political and social commentary that has remained relevant and engaging over long careers, and they have influenced younger artists. Saul seems to be enjoying renewed attention from younger artists such as Dana Schutz, who recently exhibited at the Contemporary. Edwards has been a father figure, particularly to African-American artists such as Atlanta sculptor Curtis Patterson, both in his fusion of sources into abstract imagery and in the way he has conducted his career. They prove that contemporary art is not just a young person’s game. 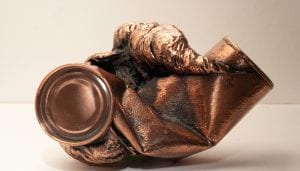 Elonda Billera’s sculptures in the adjacent exhibition “Material Deposits” might make a good segue. She has cast rolls of Pillsbury biscuits at the moment the dough explodes out of the twist-off  tubular containers (at left). Bronzed like baby shoes but positioned unceremoniously on the floor, they suggest what might have happened had Saul decided to do a number on Edwards.

Artadia artists earn their awards on individual merit, which of course is as it should be, but that can make it difficult to mount a conceptually coherent exhibition, or for that matter a review. Let me say, then, that the work of Teruya and Shows interested me the most.

Teruya makes drawings of elements of urban design and architecture — bollards, wood planks, cement blocks — as well as actual structures, which he then cuts and arranges to create crisp, elegant collaged drawings. He has taken the elements into three dimensions as well, exemplified by the floor piece on view. It doesn’t seem quite resolved, and certainly not as elegant. There are very interesting moments, such as the collapsing lighthouse, which looks like something out of a toddler-destroyed pop-up book, but on the whole it sprawls incoherently. Perhaps it was Teruya’s intention to create a cemetery of our built environment, but it isn’t quite emphatic enough to make the case. 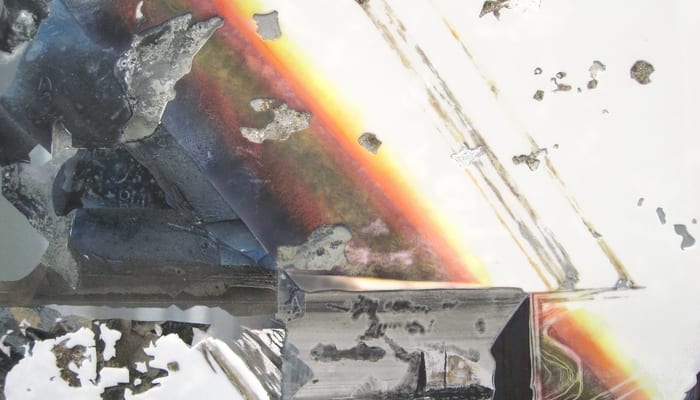 Shows’ paintings (example above) are richly confusing layers of material, color and brushstrokes, which embody the effort to make sense of this complicated world. Shaw’s sculptures also navigate a world beyond our ken. In one, a bundle of branches, tipped with shimmery mylar, floats a few feet from the floor. In the other, glass tubes explode as if frozen liquid from the orifices of a tree trunk. Harry Potter for adults.