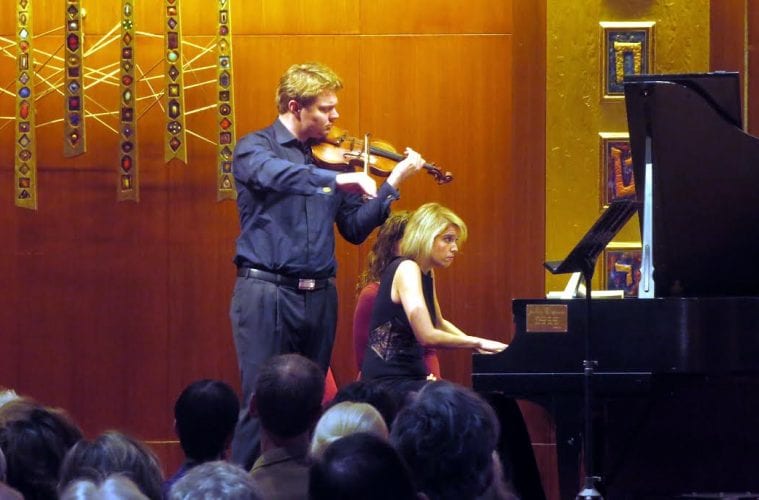 On Sunday’s chilly, rainy afternoon the Atlanta Chamber Players performed a concert of music by Vaughan Williams and Brahms at the warmly welcoming Ahavath Achim Synagogue on Peachtree Battle Avenue.

Violinist David Coucheron and pianist Elizabeth Pridgen opened the program with The Lark Ascending by Ralph Vaughan Williams, which is becoming a kind of signature piece for Coucheron. Inspired by a poem of the same name by Victorian-era English novelist and poet George Meredith, Vaughan Williams originally composed The Lark Ascending for violin and piano in 1914 and transcribed it later for violin and orchestra, the form in which it has become most familiar.

As concertmaster of the Atlanta Symphony Orchestra, Coucheron performed The Lark Ascending in the latter form in early 2014 with the ASO, with music director Robert Spano conducting, and was subsequently recorded and released on ASO Media later that same year.

In Sunday’s performance, we got to hear the original version for violin and piano, which is no less pastoral and sweetly lyrical, but far more intimate, rivaling many of Vaughan Williams’ songs for solo voice and piano in expressing the character of the bucolic British countryside and its culture.

Pridgen was joined by clarinetist Alcides Rodriguez and cellist Brad Ritchie for the Clarinet Trio in A minor, Op. 114 by Johannes Brahms, written in 1891, one of four of Brahms’ late-life works composed for German clarinetist Richard Mühlfeld. Mühlfeld was clarinetist for the Meiningen Court Orchestra, although he began his musical career as a violinist. Brahms met him in the summer of 1891, and that December Mühlfeld premiered the Trio, with Brahms himself as pianist, as well as Brahms’ Clarinet Quintet, composed the same year.

Both of these works are autumnal in their expressive scope, and in this performance of the Clarinet Trio, Rodriguez, Ritchie and Pridgen brought that to the fore in all of its liquidly lyrical, mahogany-toned hues, mellowed romantic sentiment and introspective character. It felt like one were listening from the vantage of a comfy chair, wrapped in a blanket, in front of a warm fireplace, a fine feeling for what was a dreary day outdoors.

After intermission came the piece which Pridgen said had inspired the concert’s overall programming, Vaughan Williams’ Piano Quintet in C minor. Like Franz Schubert’s popular Piano Quintet in A major (“The Trout”), it is unusually scored for violin, viola, cello, contrabass and piano. Violist Catherine Lynn and contrabassist Colin Corner joined Coucheron, Ritchie and Pridgen in performing the work.

The key is that in 1908 Vaughan Williams spent three months in Paris, studying with French composer Maurice Ravel. The fact that Vaughan Williams’ Piano Quintet was composed in 1903, five years before the composer’s sojourn to Paris, drew the logic of the program into focus.

Although the modern-minded Vaughan Williams had clearly no desire to emulate Brahms, even during his days as a student at both the Royal College of Music and at Cambridge, the Quintet nonetheless embraces a more Germanic, more Brahmsian style than the composer’s post-Paris works, like The Lark Ascending, which are lighter and trimmer in texture. How much impact Ravel had on Vaughan Williams’ evolving style is speculative, as documentation is scant, but it is true that by 1910 he was gaining fame in British music circles for a more personal musical language with such works as the Fantasia on a Theme by Thomas Tallis and A Sea Symphony. The Lark Ascending would come only a few years later, though it would not be premiered until after the end of World War I.

That said, this Quintet is not by any means a piece of hack-work, but a substantive, engaging discovery, played beautifully in this performance; a case of a composer in the process of finding his own voice. To place the maximally mature Clarinet Trio of Brahms on the same program was insightful, though in a future concert it would be even more interesting to hear this quintet of Vaughan Williams paired with Schubert’s Trout Quintet. Perhaps a future Atlanta Chamber Players concert could offer up that opportunity.