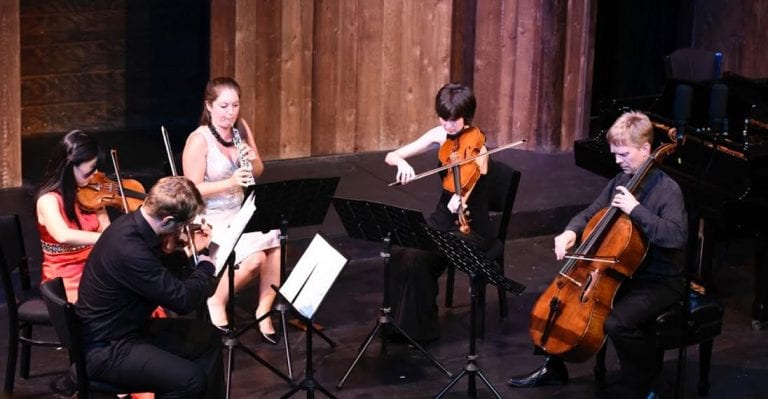 On Tuesday evening, the Atlanta Chamber Players returned to one for their favorite haunts, the New American Shakespeare Tavern in Midtown, to present a concert of music by Purcell, Bliss and Schubert, plus the adjudicated performances for the Southeast regional semi-finals of the Rapido! Composition Contest.

The concert opened with Henry Purcell’s “Chacony in G minor,” arranged by Benjamin Britten for string quartet. The title is the only instance the word “Chacony” appears in all of music literature, except for the third movement of Britten’s own String Quartet No. 2, which he wrote in homage to Purcell.

The word is directly related to the common French “chaconne,” which involves a “ground bass” theme with a set of variations over a repeated harmonic progression, in a typically stately triple time. Its heyday was in the Baroque era, but it gained a resurgence of interest among composers and performers like Britten during the 20th century.

The original composition was for a consort of viols, Baroque stringed instruments that are separate from the violin family, which are held upright to play and have a fretted fingerboard much like a guitar. Violinists David Coucheron and Helen Kim, violist Catherine Lynn and cellist Brad Ritchie performed on modern instruments but with a nod to the musical style and instruments of Purcell’s era.

Oboist Elizabeth Koch Tiscione then joined the quartet for the Quintet for Oboe and String Quartet by Sir Arthur Bliss. It may well be the most performed oboe quintet in the modern literature along with that of fellow Englishman Arnold Bax. Written in 1927, Bliss’ quintet is a very modern but lovely and piquant work that points to what was the composer’s emerging romantic side as his style matured. The performers brought out that balance of influences in their performance.

After intermission came the centerpiece of the evening, the program’s principal raison d’être: the Southeast regional semi-finals of the Rapido! Composition Contest. Back in June, it was revealed that entrants to the competition were required to write four to six minutes of music in a theme-and-variations form for violin, clarinet and piano over the course of the 14 days within which the score would be due to the competition.

The three semi-finalist composers for the Southeast competition, whose works were selected from a number of anonymous entries, were Eric Benaim, Nickitas Demos and Peter Van Zandt Lane. It is one of five Rapido! regional semi-finals nationwide.

Demos is professor of composition and coordinator of composition studies at the Georgia State University School of Music, and founding artistic director of GSU’s neoPhonia new music ensemble. His entry was “Dance for the New Mandarins,” which emphasized accumulation of driving rhythmic elements.

Venezuelan-born Benaim is currently based in Miami, Florida, with a particular passion for composing music for film, television and video games. His entry was titled “Theme and Variations of Ancient Visions,” which brought a modern but more lyrical voice to the fore.

Peter Van Zandt Lane is assistant professor of composition and director of the Dancz Center for New Music at University of Georgia’s Hodgson School of Music. His work was entitled “Iris Variations,” and it alternated sections of urgent rhythms with more lyrical ones. But more tellingly, it incorporated an approach to the form which “irised down” or compacted his musical elements into variations of shorter and shorter lengths — hence the title.

After all three works were performed, the panel of adjudicators retired to a different room to make their decision. The judges were Evans Mirageas, vice president of artistic planning for the Atlanta Symphony Orchestra; composer Richard Prior, senior lecturer in composition and director of orchestral studies at Emory University; and Christopher Rex, principal cellist of the Atlanta Symphony Orchestra.

While the judges reached their decision, there was a final large work on the program to give them time: Franz Schubert’s “Fantasie for Piano, Four Hands,” D. 940. It was performed by Pridgen and fellow pianist Julie Coucheron, who collaborate frequently in performances of four-handed piano music.

Composed and premiered during the final year of Schubert’s short life and published posthumously, the “Fantasie” was written in four movements without pause between, and serves somewhat as a bridge between more “sonata-like” classically structured works and the freer forms of later Romantic rhapsodic pieces for piano. The 20-minute performance by Pridgen and Coucheron was delightful and substantive.

After the conclusion of the Schubert, the competition winner was announced: Peter Van Zandt Lane, who will now move on as a finalist to the national Rapido! competition in January at the High Museum of Art.