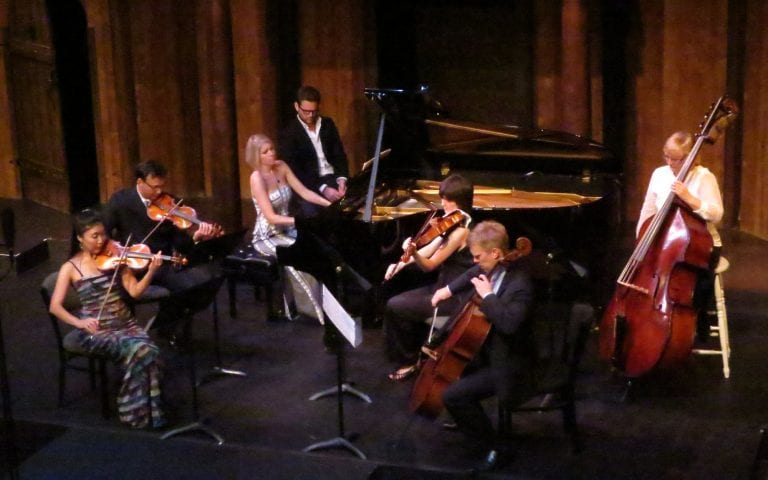 The Atlanta Chamber Players at a recent concert at the New American Shakespeare Tavern. (Photo by Mark Gresham.)

The Atlanta Chamber Players opened its 2014–15 season on Tuesday at one of the group’s favorite haunts, the New American Shakespeare Tavern on Peachtree Street. A total of 11 musicians were involved in the performance of music by Françaix, Thuille and Chopin. Although she had previously performed with ACP, this was pianist Elizabeth Pridgen’s debut as the group’s new artistic director.

The concert opened with the Quartet for English Horn and Strings by Jean Françaix, performed by Elizabeth Koch Tiscione on English horn, violinist Helen Hwaya Kim, violist Catherine Lynn and cellist Brad Ritchie. Written in 1971, the music of Françaix nevertheless retains the kind of French neoclassical character that hearkens back to 1930s Paris.

The five short movements commenced with a playful ragtime followed by a tranquil andante that focuses on sentimental melody for the English horn. The dancing third and reflective fourth movements lead into a sophisticated allegro giocoso finale that reflects the bustle of Paris, even if a somewhat stereotypical musical impression.

That lightness of being doesn’t mean Françaix should be underestimated in terms of sophistication and detail. There is much to be heard in this music, and the players brought out its inner workings well. The music’s character and unusual scoring made for a buoyant but energizing opener.

Next up was the Sextet for Piano and Woodwind Quintet by Austrian composer Ludwig Thuille, written in 1888. Not only is it Thuille’s most performed work, it is, frankly, the only one to retain a place in standard classical repertoire. At age 15, Thuille met the young Richard Strauss, who was only a few years his junior, and the two became lifelong friends. It was Strauss who arranged for the premiere performance of this Sextet.

Tiscione, swapping to her oboe, was joined by pianist Pridgen, flutist Todd Skitch, clarinetist Alcides Rodriguez, hornist Anna Dodd and bassoonist Keith Buncke. Buncke — who at age 20 is the new principal bassoonist of the Atlanta Symphony Orchestra, but has not yet played an official concert with them due to the current lockout — made his Atlanta chamber music debut in this ACP concert. You could say ACP has developed a track record of that: Skitch made his Atlanta chamber music debut in last season’s ACP opener, and Tiscione likewise made hers with ACP some years before.

Thuille’s music is stylistically a direct descendant of Brahms, showing a classical architectural mind with a romantic expressive temperament. Lush writing in the piano underscores the layered lines for winds. It is a broad, dignified four-movement work, but of a generally sunny disposition, imposing neither tragedy nor bombast upon the ear.

The Sextet’s most unusual feature is the third movement, which, instead of a more typical scherzo, is a sprightly gavotte with a contrasting middle section marked doppio movimento (twice as fast). Otherwise, the finale was bright and lively Molto vivace, in 6/8 time, which the players executed with good-humored enthusiasm that befit it.

Unlike the unusual scoring of Françaix’s Quartet, which began the concert, there is a reasonable body of work in the repertoire for woodwind quintet and piano that is worth hearing. Unfortunately, the public doesn’t get as much opportunity to hear it as they do works for piano and strings, though it is a delightfully colorful combination for chamber music. Chances for audiences to hear more would be welcomed.

After intermission, Pridgen, Kim, Lynn and Ritchie returned to the stage, plus violinist Kenn Wagner and contrabassist Gloria Jones, for a rather interesting rendition of Frederic Chopin’s Piano Concerto No. 2 in F minor, arranged for piano and string quintet.

Pridgen’s performance was sparking, playful and often intimate, with power that was unforced where needed, all in a way that is less easily achievable in a large hall with a large piano, playing against accompaniment of full orchestra. But with this chamber scoring, in this room and with a mid-sized Steinway grand, the clarity and detail were that of a piano recital, with the string quintet taking the secondary background role versus a collaboration of equals more common in genuine chamber music. Nevertheless, it was a refreshing and highly effective change of pace from the original, and a brilliant performed way to cap off this concert.

[Full disclosure: clarinetist Laura Ardan has commissioned a work by the author that will be performed by Ardan with the Atlanta Chamber Players in early May.]