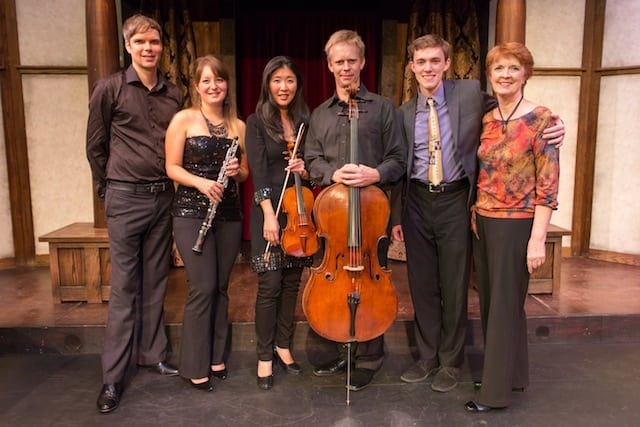 The Atlanta Chamber Players opened their 2013-14 season with a concert of music by Duruflé, Brahms and Charles Zoll at the New American Shakespeare Tavern on Wednesday night.

The show opened with Duruflé’s “Prélude, récitatif et variations,” Op. 3 for flute, viola and piano, performed by flutist Todd Skitch, violist Catherine Lynn and guest pianist Tim Whitehead. ACP Artistic Director Paula Peace did not perform in this concert but acted as compère, speaking to the audience during the first half.

Skitch is the newest addition to the flute section of the Atlanta Symphony Orchestra, beginning this season after a 16-year stint with the Memphis Symphony, so it’s not surprising that Peace snapped up the opportunity to introduce him to Atlanta as a chamber player.

Among Duruflé’s small but consistently high-level catalog of compositions, “Prélude, récitatif et variations” is a delight and a discovery for those who may know only his “Requiem,” organ works or unaccompanied choral pieces. The 12-minute chamber work, written in 1928, also served as a great introduction to Skitch, especially the well-rounded tones of his instrument’s lower register in dialogues with Lynn’s somewhat understated viola, underscored by Whitehead’s lucid piano accompaniment.

Next up was the world premiere of Charles Zoll’s “bailes encima del escritorio de nuestra juventud” (“dances atop the school desks of our youth”). The 22-year-old Zoll is from Tucson, Arizona, where he completed a bachelor’s degree in music at the University of Arizona in May. He is now a graduate student at McGill University in Montreal. In January, Zoll won top prize in the “Rapido!” national composition contest, and his five-minute winning submission was fleshed out into this longer work for oboe, violin, cello and piano. Whitehead was joined onstage by oboist Elizabeth Koch Tiscione, violinist Helen Kim and cellist Brad Ritchie to perform the premiere.

In his program notes, Zoll said “bailes encima” is about the “exploration of the limits of motion as they are characterized by dance, where one dance blends into the next in reaction to its predecessor.” Though Zoll uses some extended techniques here and there throughout the piece, the overriding element is the interplay of rhythms, often dark and intensely visceral in their complex, driving undercurrent, most notably in the challenging piano part.

While the piece is categorically 21st-century classical in lineage and demeanor, one notices a panoply of jazz-influenced gestures, including “blue” notes, but within a different overall framework than one might expect for the idiom. That makes it difficult to associate the piano part, for example, with the name of any specific exponent of jazz-oriented piano — a compliment to Zoll.

One can hear, though, more obvious references, such as a swinging, Lindy Hop-influenced section. Zoll’s even-numbered movement titles bear more explicit references to Latin dance elements — tango and zapateado — though those elements too are present in a context considerably other than straightforward, enough so to demand a second or third hearing. It was a strong outing for Zoll, and it will be very interesting to see how this young composer’s voice develops over time.

In the meantime, “bailes encima” will receive a series of subsequent performances across the country by ACP’s fellow “Rapido!” partner ensembles, starting this Sunday when Dallas-based contemporary ensemble Voices of Change will perform the Southwestern regional premiere. Boston Musica Viva, Fifth House Ensemble in Chicago and Left Coast Chamber Ensemble in San Francisco will then perform it in November, February and March respectively.

After intermission, Kim, Lynn and Ritchie returned to the stage joined by violinist Kenn Wagner and clarinetist Alcides Rodriguez for Brahms’ Clarinet Quintet in B minor, Op. 115, a 35-minute work of autumnal temperament. The score asks for a clarinet in A versus the more commonly heard B-flat instrument. Rodriguez’ lucullan tone and phrasing centered the ensemble for the warm and lovingly passionate performance. At the end, the audience allowed themselves just enough silence to enjoy the emotion of the moment before erupting into applause.

The Atlanta Chamber Players will perform their next series concert on November 24 at Ahavath Achim Synagogue, with music by Copland, Schubert and Dvořák.