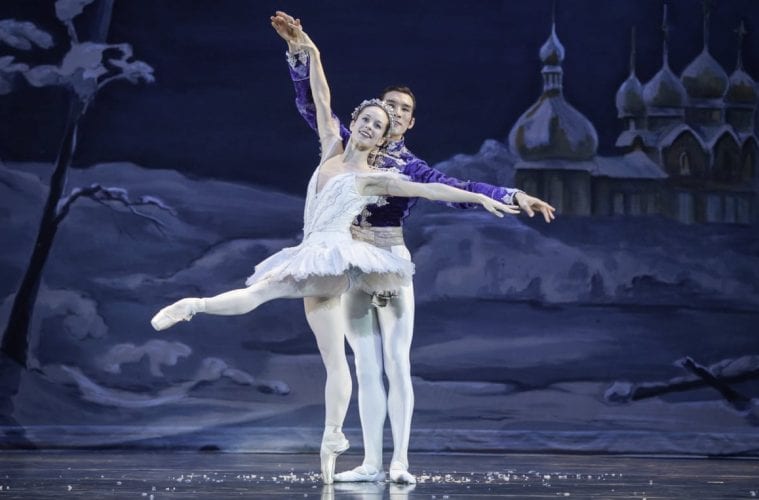 Review: The magic of “Atlanta Ballet’s Nutcracker” remains its ability to spin an enchanting tale 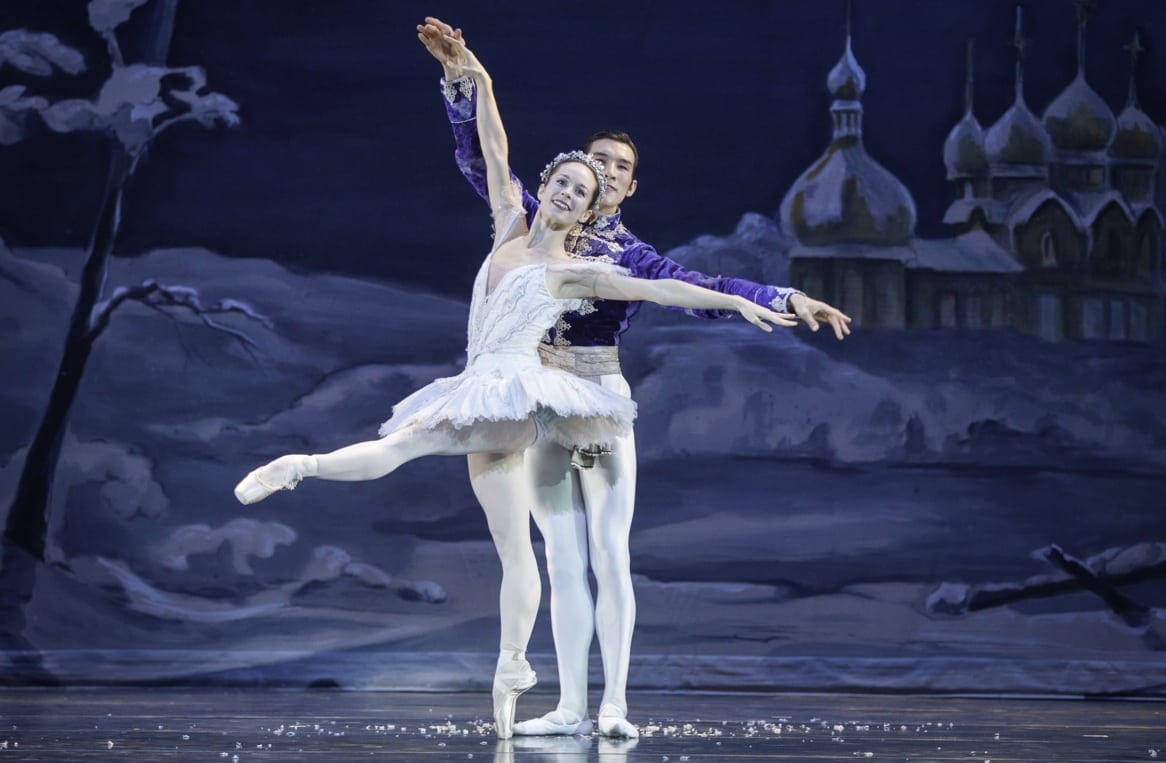 Alessa Rogers and Brandon Nguyen as the Snow Queen and King. (Photos by Charlie McCullers)

Illusion and dream are at the essence of ballet, and Atlanta Ballet’s Nutcracker holds plenty. In John McFall’s version, which opened last Thursday at the Fox Theatre and runs through December 28, story, choreography, visual effects and music — played by the Atlanta Ballet Orchestra under Gary Sheldon’s baton — are thoughtfully blended for magical effects.

The production holds up to little updates every year. Perhaps one of the most noticeable changes was the 2012 addition of magic tricks, courtesy of illusionist Drew Thomas. The first year, the dancers’ lack of familiarity with the illusionist’s craft was apparent. Last year, Thomas himself performed the tricks by the Drosselmeyer with panache, but his particular timing and flamboyance often seemed out of place and sometimes disrupted the stage illusion.

This year, guest artist Nathan Griswold blended balletic timing with the tricks, such as the flying handkerchief in the theater house and the transformation from a boy Nutcracker into a beefy, fully grown Nutcracker. Clearly, McFall had worked these more subtly into the story. It’s an example of what distinguishes McFall’s Nutcracker from more traditional productions. McFall’s skill at spinning a story is a hallmark of his choreography.

It’s more Fokine than Petipa, with story over pageantry and technical tricks, with full-body expressiveness over stylized pantomime. Dancers must transcend technique and give themselves over to character and situation — more like Anna Pavlova than Mathilde Kschessinska. 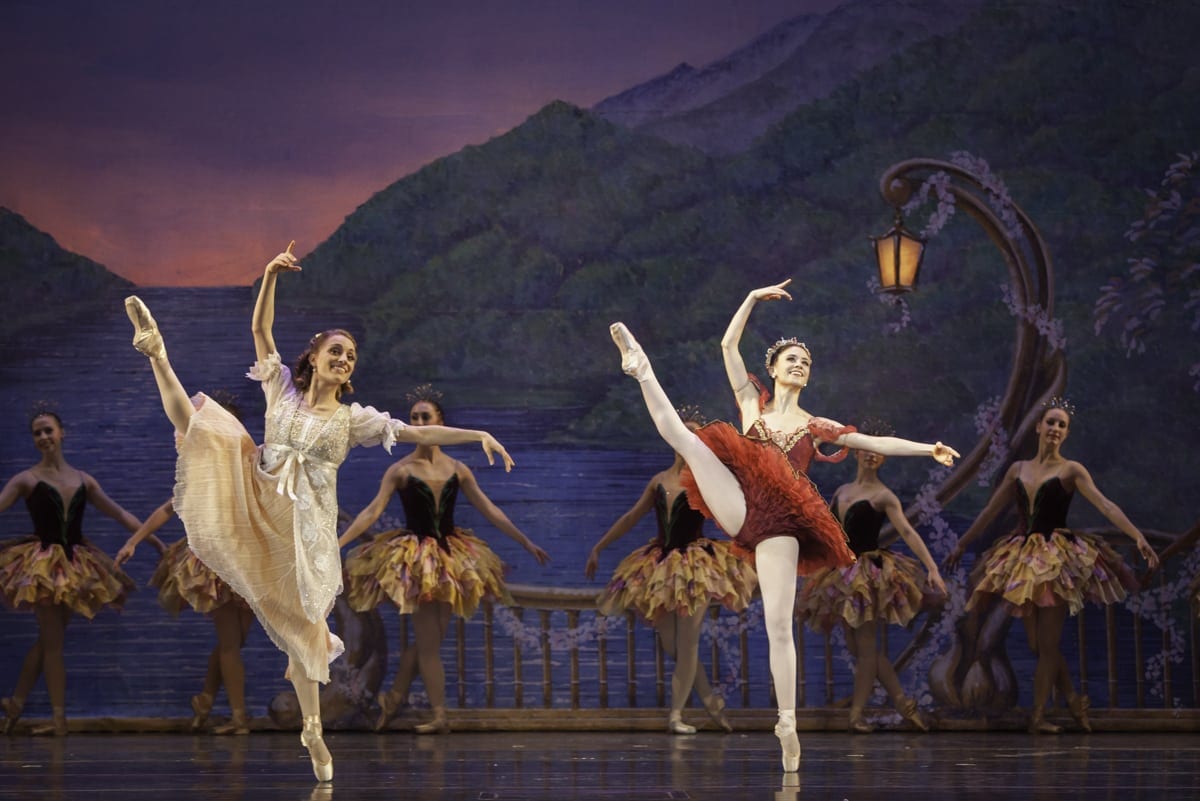 Jackie Nash (left) as Marya and Nadia Mara as the Sugar Plum Fairy.

It was evident in the “Dance of the Sugar Plum Fairy.” We didn’t see much of the fairy queen’s typically dainty hops en pointe or her intricate footwork. Instead, between young Marya (Jackie Nash) and Sugar Plum (Nadia Mara) were sweeping suspensions and warm, open lines that revealed a growing friendship and suggested that the girl-on-the-verge-of-womanhood sees the gracious hostess-ballerina as a reflection of what Marya would like to become.

Similarly, the male variation wasn’t merely virtuosic display. When John Welker danced the Cavalier last Thursday, every turn and gesture expressed his feelings for his partner. As the Sugar Plum Fairy, Mara started tentatively, but her Cavalier (Welker) was steadfast; by the final stretch of supported promenades and pirouettes, Mara had found her sparkle.

And when the couple’s pas de deux brought Act II to a close, technical display fell second to story — every arm and leg extension was a gesture, every lift a celebration of their growing love for each other. 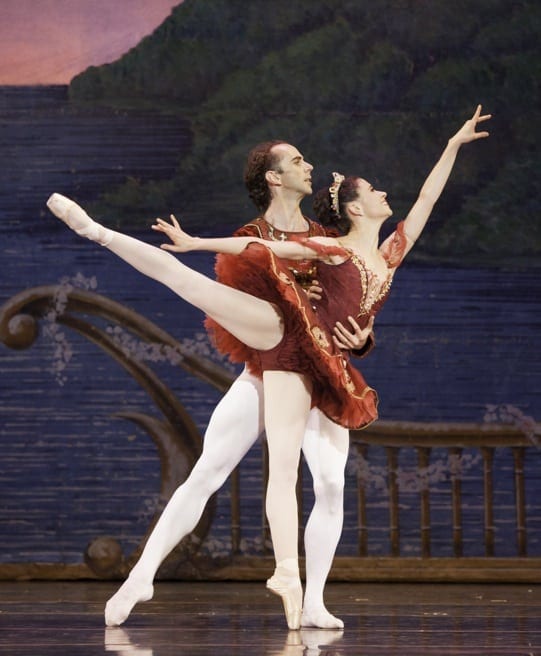 Nadia Mara and John Welker as the Sugar Plum Fairy and Cavalier.

This year’s opening night performance last Thursday left little room for improvement, but for a few unstretched feet and the need to sustain a continuous imaginative spell from the production’s beginning to end.

Individual performances were spectacularly moving; it seems Atlanta Ballet’s core company members continue to grow in artistry. As Marya, Nash made a major impression in her first starring role as a member of the lead cast (there are four different casts in this year’s production). Nash rose to the moment, showcasing the spunk and ebullience needed to carry Act I. From the moment she galumphed like a tomboy into her new party dress to the instant she stabbed the Rat King and toppled him with her index finger, she was resolute and radiant — equal parts intelligence and humor.

Dazzling performances continued with Alessa Rogers and Brandon Nguyen as Snow Queen and King. Rogers was bursting with enthusiasm, as the ensemble shifted through kaleidoscopic patterns while the Georgia Youth Choir sang. She challenged Nguyen with tiny surprises, molding her body into each line and shape with unpredictable but fully intentional timing. 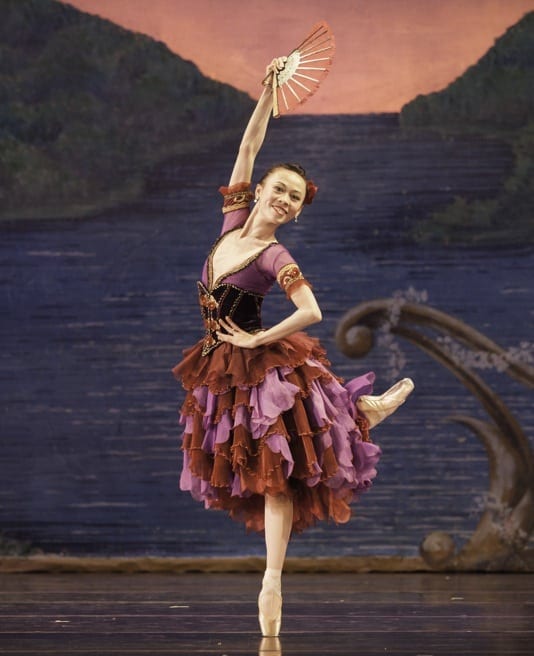 Peng-Yu Chen made a resounding comeback from her injury.

In Act II, Peng-Yu Chen and Nguyen danced a fiery Spanish variation — Chen, returning for her first full season since a career-threatening injury, showed deeper maturity and a stronger presence on stage. She perched en pointe, arm and leg drawn outward, then flashed her eyes at the audience as she flipped her fan and plunged fearlessly into an arch over Nguyen’s arm.

Rogers and Christian Clark took command of the stage as Arabian dancers, building on the onstage chemistry they amply displayed in Romeo et Juliette last February. They smolder every time they dance a duet, and the Arabian dance was no exception. In one risky lift after another, Rogers timed her phrases like an accomplished jazz singer. She dared Clark to catch her at unexpected moments; Clark was constantly at the ready, and the effect was magnetic and breathtaking.

Considering the production’s complexity, it is no small feat to create an evening so packed with magical moments. If, at some level, the cast can think less about executing individual tasks, and more of being part of a stage illusion — of Marya’s dream — perhaps audiences can lose themselves even further in this production, too.