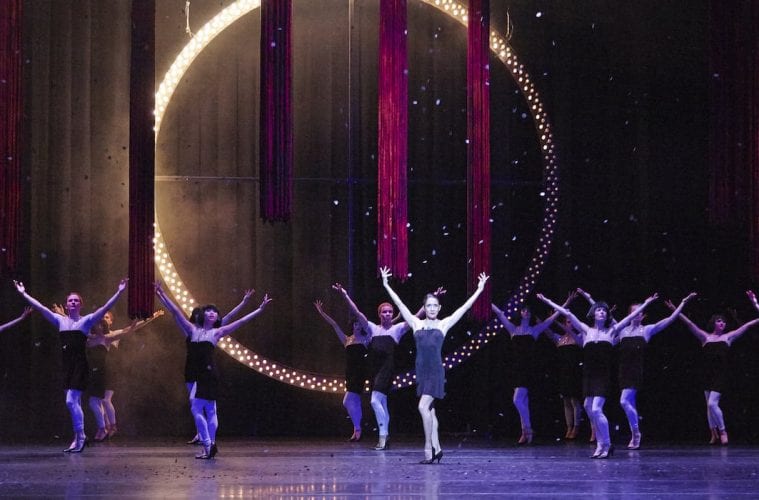 “O Fortuna,” the iconic opening and closing section of Carl Orff’s “Carmina Burana,” is huge. Not Trump-speak “huge,” but huge in the way of crushing tsunamis, epic battles and great love. Composed in 1937, the piece has since become a pop culture staple appearing in countless advertisements, films and film trailers and television shows, recently with a satirical slant. For a choreographer, the score presents a unique challenge: how to transcend associations of comedic and cinematic melodrama (banish that Domino’s commercial and the Paul Blart: Mall Cop trailer from your mind!) to showcase the music’s profound elegance and stirring power.

David Bintley, choreographer and artistic director of Birmingham Royal Ballet, approaches the musical beast with a loving, if at times heavy hand, in his 1995 ballet Carmina Burana, performed by the Atlanta Ballet through Saturday at the Cobb Energy Performing Arts Centre. Orff’s seminal work, based on a series of 13th-century songs known for their secular irreverence, is presented in three parts — Springtime, The Tavern and Court of Love — each featuring a male seminarian grappling with temptation and varying degrees of lust/love. To his credit, Bintley allows both the score’s musical structure and its loose, episodic storyline to drive the movement choices equally; strict ballet classicism and pantomime, Bintley understands, is a world too small to hold such weighty moral questions. Though the rhythmic gestures are satisfyingly timed to complex melodies in the first section, many feel too simple, too formal and restrained for the score’s massive, emotionally complex presence.

Take the opening image: in the darkness, the impressive Georgia State University singers blast us with that first iconic note. As Fortuna, Rachel van Buskirk appears on an empty stage flanked by the singers standing godlike in the boxes beside and above her. As the pulsing low notes cut in, Buskirk remains motionless, allowing the full expansiveness of the size and sound around her to resonate. (It’s a thrilling and audacious choice to present a solo against such a huge piece of music.) She commands all the power until . . . until . . . she begins to move, shifting through a series of rigid poses too two-dimensional and choppy to feel sensual, tipping her arms from side to side as if weighing options. It’s a fatalistic prelude to a bizarre domestic scene overseen by three barefoot and very pregnant women. In gauzy white dresses and razor-cut black bob wigs, they traverse the stage over and over as if lamenting (satirizing?) their lot in life. Enter Heath Gill, a wide-eyed and innocent seminarian who glides joyously among these earth-bound creatures a free man. Again Bintley presents a stark contrast and asks us to make a judgment: are these women trapped? Are they powerful? Who’s better off?

Carmina Burana’s first section has all the hallmarks of a classic story ballet placed squarely in the nineties. The music solidifies gender roles as women prance and flit about, batting their eyelashes and goofily searching for their men to the sound of crisp, airy female voices. Men in oversized, frankly hideous, Hawiian-esque shirts run and jump over one another to the deeper, frankly gorgeous, sound of male voices. But it’s also tongue-in-cheek funny, a nod toward the music’s penchant for melodrama and larger-than-life sound. From the costumes (abstracted kinky underwear, boxy tops splashed with bright colors) to the set (a colorful brick wall, florescent lighting, a giant broken heart) Carmina Burana somehow manages to look both hopelessly dated and cheekily retro.

The second seminarian, danced by Alexandre Barros, shares none of Gill’s innocence. In the evening’s most disturbing and problematic scene, he joins a group of gluttonous men to devour a Roasted Swan, danced by Jackie Nash. Even as she tries to shoo them away with her Vegas showgirl feathers, the five men toss and manhandle her. They turn her sideways and chew on her body, eventually pouncing on top of her. If it sounds like an assault, it was. And her reaction? A childlike pout as she is dragged away to be consumed.

The scene, wildly out of place, begs the question of artistic responsibility versus historical accuracy. Does this “comedic” representation belong on stage in 2017 just a few weeks after millions of women marched for their rights? Granted, the second seminarian struggles with his choices. Thrown into the boys-club, Barros joins an aggressive, swirling unison dance then steps out to observe the frenzy. In the end, he falls to the floor in agony and another man kicks him maliciously. Jackie Nash as the Roast Swan. (Photo by Kim Kenney.)

Whether he intended all the questions or not, Bintley raises many. The third seminarian, danced impeccably by Christian Clark, meets Fortuna — now a prostitute in a slinky red dress — and grapples with temptation. (Fortuna is a sex worker?) In one of the evening’s most moving moments, Clark slowly disrobes down to his underwear and holds his clothes in front of his body protectively as Buskirk circles around him. Soprano Jeni Houser’s superb voice calls to the seminarian like a siren (tenor Brian Wallin and baritone Andrew Lovato also do outstanding work as the vocal soloists).

Later, Clark and Buskirk perform the evening’s standout duet. The male and female choruses — both the dancers’ bodies and the singers’ voices — emerge in lines on the side and back walls to comment, judge or perhaps mock the action. Courting turns to fighting, which, presumably, leads to sex. But in the end, Fortuna — back to the black dress — wins. She seduces then knocks the seminarian down and chases him away.

Bintley’s choreographic prowess shines in the last section, as the entire company enters methodically in rows behind Fortuna, all wearing a version of her black dress and echoing her first solo, much more vivacious and empowered. Fortuna’s army strides forward, and “O Fortuna” sounds glorious, bolstered by the power of many. The three seminarians stride forward, slashing and slicing in gestures of self-inflicted torture. It was a moving end that, even in 2017, needs no reexamining.