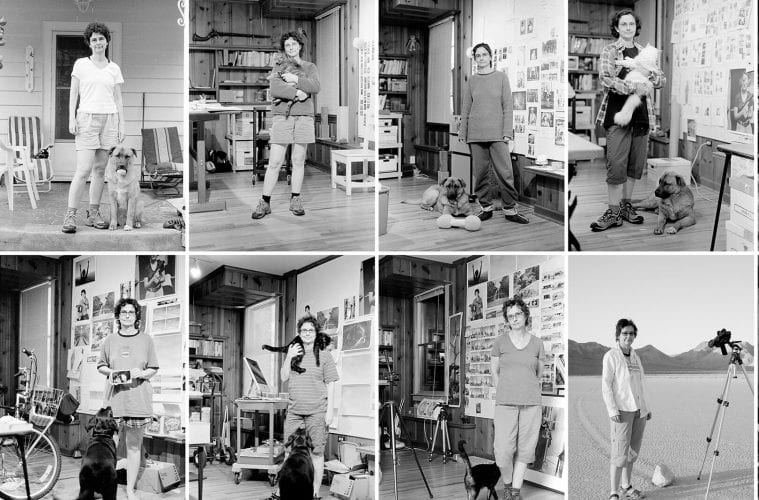 Review: At Whitespace, Nancy Floyd is artist and subject, archivist and curator

Atlanta-based artist Nancy Floyd has been photographing herself first thing in the morning in her home since 1982. Her new exhibition Weathering Time at Whitespace Gallery through December 2 is a photographer’s record of documenting her life over the course of 35 years.

Floyd uses a tripod and a cable release held in her hand. Pants 1982–2016 is presented as a line of 14 black-and-white images, each 8 by 10 inches, digitally printed on fiber paper. The artist stands, wearing pants, looking into the camera’s lens without smiling. At a recent artist’s talk at the gallery, Floyd said she’s not interested in what smiling does to the articulation of the facial structure, but that her interest lies in the changing environment, the objects and people and pets around her.

Without variance, she shoots herself frontally, but there are nuances of change in the different outfits she wears or in the rooms she’s in. Her stance also changes over the years: the artist holds herself slightly differently each day, perhaps gently shifting her weight from one foot to the other or slightly altering the tilt of her head.

Thirty-Five Years 1982–2016 from 2017 is a digital inkjet print on Canson Plantine paper of 35 rectangles presented in a 7-by-5 grid. The artist stands in her different environments, from bedrooms that are sometimes messy to porch fronts to studio interiors with her work. Floyd presents herself in this series more specifically as an artist in her world than as the young woman of Pants. Compelling in this multiple-image print are three deep black rectangles that mark the years in which Floyd did not take a photograph for the series. These absences point to a reality of an artist’s life and make the print even more engaging. In the second adjoining gallery, there are large contact sheets, 31 by 41 inches in size. Although printed in 2017, these images date from the period between June 1982 and December 2016, with many spaces printed black where Floyd advanced the film on days she did not shoot. These contact sheets constitute visual diaries of Floyd’s life to which we become witnesses. Two other contact sheets are even darker because of family loss, The Month Mom Died, April 2009 (2017) and The Month Dad Died, May 2002 (2017). In these two works, the sense of absence and loss is palpable from the number of black spaces in the contact sheets that stand for the time the artist needed to grieve.

Perhaps the most powerful works in the exhibition deal with the death of Floyd’s brother, Jimmy, who died in Vietnam in 1969. In In Jimmy’s Robe 1983/2012 (2015) Floyd wears her brother’s robe at two different points in time. Her grieving and comfort in wearing this robe, her strong attachment to the object, is evident. The presence of her hands is strikingly different in the two images. In the 1983 panel, her hands contain the cable release. In the 2013 panel, her clasped hands grasp each other in a gesture of holding on. Jimmy ca. 1960, 1969, 2013 (2017) is a digital triptych that contains three images printed on one sheet of exhibition fiber paper. In this work, the images are of different sizes and read right to left; the central image is the only color print in the exhibition. The first image is a family portrait on the front porch: Jimmy is a young teenager; Nancy is a small child, the youngest of six. The second image digitized into the triptych is a polaroid of Jimmy in Vietnam, and the last image, much larger than the other two, is the artist at the Vietnam Memorial. Floyd documents herself with an intense clarity in both the image and her gaze, this time clearly addressed to the viewer. The passage of time and powerful emotion are clearly written into this work. Weathering Time is a personal archive that chronicles Floyd’s persistence in documenting herself.  She presents herself to us as a photographer, a pet owner, a woman, a mother, sister and daughter, and also simply as a human being. The photos constitute continual self-examination and reexamination of who she is, as recorded with her camera.

Floyd is currently planning to retire from teaching to live in the High Desert (like Georgia O’Keeffe, another female artist famous for her control over her own image). There, she plans to continue photographing herself for the ongoing series Weathering Time.