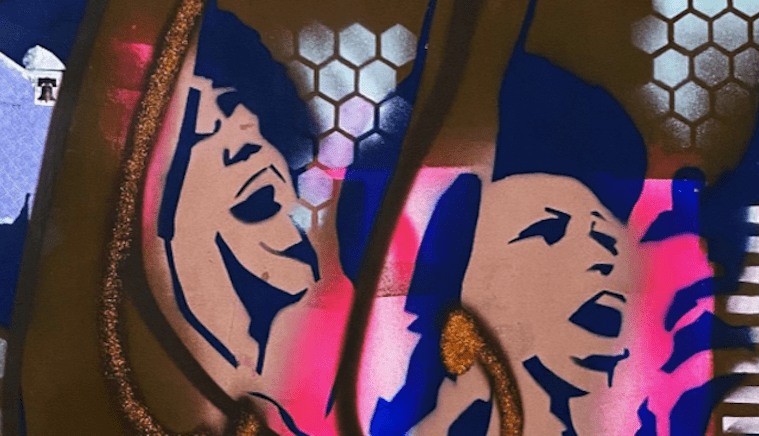 Michael Jones isn’t in the business of making people comfortable. “To critique my work, you must first critique life,” he says in his bio. The personal is political, and his art always speaks to that.

When asked how the COVID-19 pandemic has affected his work, Jones said he’s developed an affinity for disc golf and that his work would’ve been entirely different. He believes art is a gift. He talks about how hard it is to be a Black man in the art world and the world at large, always curious about his target market, hopeful his message comes through.

His latest series, $h!t That Americans Like: Riots & Rallies, Parades & Protests, uses a gritty collage aesthetic to comment on things Americans like in 2021. It’s on view at Swan Coach House Gallery through April 1, by appointment and with walk-ins on Saturdays (Jones will be at the gallery from 11 a.m. to 2 p.m. March 20). His It’s hard to see under white sheets (mixed media, 42 x 36 x 28 inches) makes you feel like you’re watching a White cop pull over a Black man in the backwoods of  a decidedly red state.

The center is confrontational. Bold red suspenders intersect in an open suitcase, a singed cloth draped over an American flag. The suitcase is vintage baby blue and fabric-lined, with what appears to be a small, rusted animal trap hung ominously. The suitcase is framed with electric green turf, cardboard, intricate bisque-colored coiled resin with a dark cherry wood headboard. Jones uses found objects and mixed media to make the unfamiliar familiar.

As an artist known for colossal murals, scale is foundational when discussing the “bigness” of Jones’ pieces. The work in this exhibit is accessible, with oft-hidden stenciled figures insisting that viewers find symbolic calls-to-action. Protesting racial injustice is a unifying theme in his art and his life; this body of work should galvanize and radicalize you.

Jones’ work is ambitious in its attempt to capture, catch and release the oppressive and many-layered monster embedded in the fabric of American society. The pieces are eye level, bridging checkered pasts and uncertain futures, making the revolution not only up close and personal but tangible.

Our God’s are Not the Same (mixed media, 63.5 x 57 inches), the first piece you encounter in the space, is arresting. Bleeding neon spray paint mimics urban cityscapes and the blood, sweat and tears of its subjects. Glitter accents speak to  resilience. The upside-down antique headboard is disorienting at first, but then it seems to loosely anchor the work, floating untethered, able to move outside the gravitational pull of space and time. Jones, who grew up in Dallas, Texas, and moved to Atlanta in 1994, cites influences as diverse as the late comedian Andy Kaufman, the late rapper MF DOOM and NFL running back Marshawn Lynch, says he’s drawn to found furniture and mixed media because he believes certain mediums can’t always express his ideas and he doesn’t want to feel boxed in or beholden to a set way of doing things.

He enjoys the unique colors of old furniture, the dark wood depicting the skin tones of people he’s representing. He’s also inspired by tattoos, which like found furniture, have scars, showing that they’ve been used. Collage allows for randomness, even though almost every object has a story behind it. “I know when I see something,” he says.

Playing Fields’  (mixed media, 57 x 48 inches) is historically significant. The  track-and-field medalists, with fists raised in the Black Power salute, shook the 1968 Summer Olympics, an action that reverberated worldwide. This stenciled piece speaks to America’s tumultuous relationship with its Black people –both second-class citizens and as delegates when required to perform. State of Champion (mixed media on paper, 58 x 42 inches) lulls you into a false narrative with its vibrant strokes and masterful use of abstraction. Jones continues to weave a rich textural landscape while making “something out of nothing,” as the proverb says.

Next, be on the lookout for a Jones mural that’s being converted into a mosaic at Hartsfield-Jackson Atlanta International Airport as part of renovations that began last fall. It will eventually take up residence on a large wall opposite the MARTA’s Airport station turnstiles.