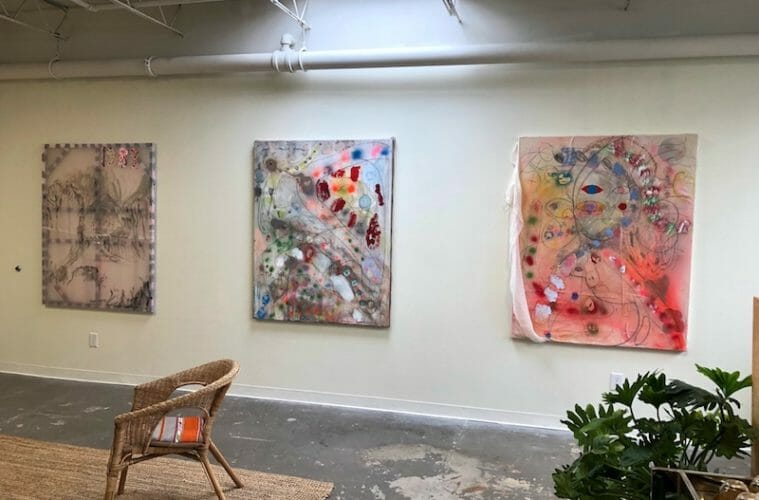 At Poem 88 through October 30, Angel of the Industrial Park is Hannah Tarr’s first solo show since her graduation from Rhode Island School of Design a decade ago. This comes as a surprise, since Tarr has been such a regular presence in various small group exhibitions that her aesthetic identity is firmly established on the Atlanta scene.

Her art is not unique, but it is a distinct response to a crisis that is personal as well as planetary — existential in both the old and new senses, affecting individual ways of navigating through life even as it threatens the life of the whole environment in which the individual lives.

Tarr has interpreted her own art in terms of the fashionable trend of “provisional painting,” but in spite of sharing some of the deliberately slapdash qualities of that movement of a few years ago, her practice seems grounded in a much deeper intuitive mode. Perhaps it’s these works’ uniquely unstable combination of incomplete completion, accomplished with deep seriousness and not a few dashes of humor, that makes them emotionally and aesthetically satisfying no matter how many questions they leave hanging for the viewer.

“Angel of Restitution” is one of several angel-inspired works in Tarr’s Poem 88 solo show.

The title of this exhibition suggests a protective presence in a bleak border zone between manufacturing facilities and nature. The poetic artist’s statement that accompanies the show reaffirms this in an oblique way: “I spoke to an angel. He said, ‘Build a skin around your skin. Let the work cover your softness and carry you into the new world. This new body will keep you safe. It will walk you through the chaos and chronic illness on this dying planet. This augmentation is your escape hatch.’”

This portentous introduction might suggest a much darker emotional tone than the sometimes downright happy entanglements of these paintings.

An occasionally improbable palette combined with a spontaneous method of composition, a willingness to experiment with modes of weathering and inclusion of organic materials from the soil outside her house provide a sense of continuity with Tarr’s 2019 two-person show at Camayuhs. At the time, she described it as a conscious effort to incorporate a lighter mood.

This show is in fact angelic in more ways than one, although the angels in such titles as “Angel of Mercy” or “Angel of Restitution” seem more like the occult or visionary angels of Renaissance magus John Dee or 20th century poet Rainer Maria Rilke than the messengers told of in Biblical texts. The improvisatory buildup of line and image in these works includes multitudes of tiny faces that sometimes seem reminiscent of the seraphim and cherubim of Eastern Orthodox icons, but this is probably a fortuitous coincidence. The specific faces more often bring to mind details from various examples of Asian religious art.

The successive layers of spontaneous improvisation mean that the road to stability leads through some strange detours that are alternately alluring and unsettling. Delight mingled with a not-unpleasant unease awaits the attentive viewer, who is most likely haunted by a sense of paradox. (We should note that one of the Hermetic maxims beloved by Tarr tells us that “all paradoxes may be reconciled.”) 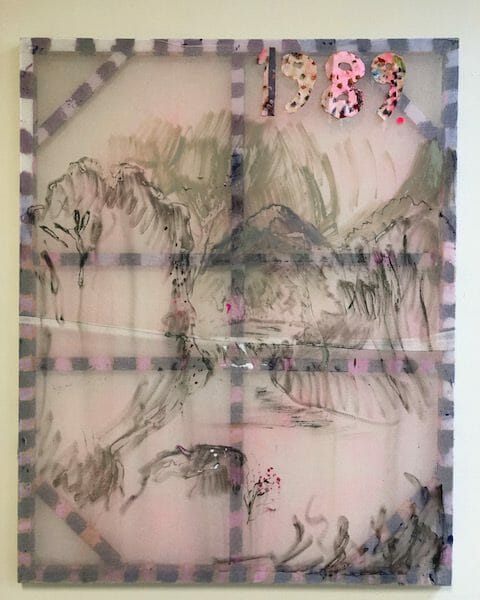 Cullum finds Tarr’s “70 Valley Road” intriguing, with its inclusion of the glitzy date 1989.

“70 Valley Road” is one of the most intriguing cases of obviously unresolved visual issues that seem to resolve on some deeper, perhaps uninterpretable level.

The central portion is dominated by a mountain landscape that seems to owe much to classical Chinese painting; above it is the date “1989” rendered in a glitzy palette and crude rendering and attached to the canvas as though added as a haphazard afterthought, which is not likely to be the case.

1989 was the year of a number of memorable events, from the Exxon Valdez oil spill to the fall of Eastern European Communism. It is also the year in which Tarr was born. Perhaps we are meant to remember all, or none, of these.

All of the singularly ambiguous images in these paintings are probably equally open to explication or (over)interpretation, but they work as subconsciously potent symbols without the stories. “Angel of Peace,” for example, contains faces of innocence, a loosely drawn heart symbol, and the outline of a random reptile that seems inexplicable without the addition of Tarr’s anecdote of the lives lost by small creatures on their futile march across the vast parking lots of her workplace. But such explanations, not found anywhere on site in the gallery, seem beside the point.

It would be fascinating, in another context, to pursue how different artists have translated the issues into personal metaphors; some start from the big context and keep it at bay with whimsy, others explore its specific contours in powerful analyses. Tarr has started from an existential situation in which “toxic environment” is not a euphemism for psychological harassment but a daily biochemical reality.

That she has chosen to conceal so much of the narrative, and to pursue her goals differently, is part of what makes these paintings compellingly attractive. Like the biochemical background of daily life and the dynamics of personal existence, the stories in this body of work are hiding in plain sight even when they seem at first glance to be completely invisible. Part of life’s task lies in discerning whether the elusive stories are there, and deciding what to do about them. Tarr has made her decision, fascinatingly.