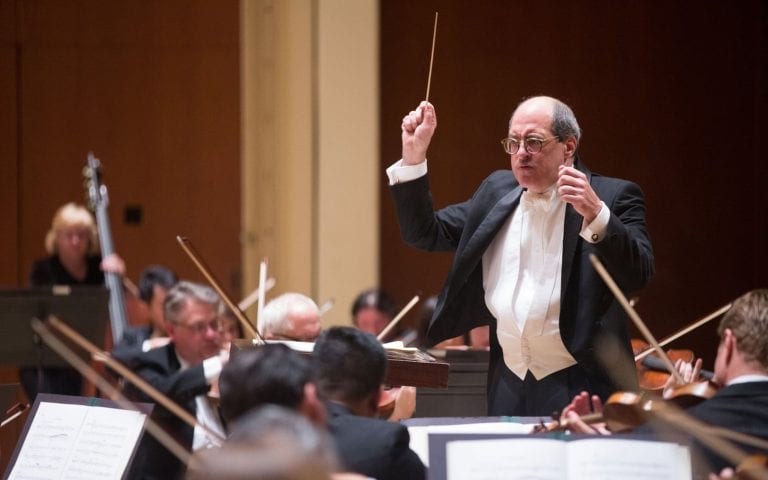 This week's series concerts marks Spano's first time at the podium in 2015. (Photo by Jeff Roffman)

Review: ASO, violinist Midori struggle with Mendelssohn and Schumann, then soar with Wagner

On Thursday, the Atlanta Symphony Orchestra performed a concert of music by 19th-century German composers Mendelssohn, Schumann and Wagner. It marked the return of ASO music director Robert Spano to the podium for his first appearance with the orchestra in the 2015 calendar year.

Guest violinist Midori was the featured soloist. The program will be repeated Saturday at 7:30 p.m. in Symphony Hall, then again on Sunday at 3 p.m. in Athens in the University of Georgia’s 1,100-seat Hugh Hodgson Concert Hall.

Spano and the orchestra opened with Felix Mendelssohn’s Overture to A Midsummer Night’s Dream. Composed when he was 17 years old, it is an important part of the core repertoire, and is often a good piece with which to begin a concert. But this performance felt curiously insecure, with ensemble issues in the winds — the chords were not articulated together, most noticeably during the work’s infamous fermata section. There was also some serious intonation issues, something rare for them.

Midori Gotō is one of the most recognizable names in the classical music circuit. The first name alone sells tickets, and Thursday was no exception to that rule. She is one of those rare prodigies whose career survived growing up. Now in her early 40s, beyond her consummate musicianship as a violinist, she has also forged herself a solid reputation as both music educator and activist. To her credit, she does not shy away from repertoire that is off the beaten path. She has, however, one major issue to contend with as a violinist on the symphonic circuit: she does not possess a large sound.

That came somewhat to the fore in her previous engagement with the ASO, during their  2012–13 season opener, in which she played Beethoven’s Violin Concerto, a stalwart of the repertoire. Unfortunately, it did again in this concert with a far lesser work, Robert Schumann’s rarely heard Violin Concerto. It is observably not one of Schumann’s best works — certainly not on a par with either his Piano Concerto or his Cello Concerto.

Completed at the beginning of October 1853, the concerto was to have been premiered late that month by eminent violinist Joseph Joachim in the opening season concert of the Düsseldorf Musikverein, but that was canceled by the program committee and replaced with Schumann’s Fantasie in C major, which Joachim had already performed with success. The concerto was rehearsed the following March with the Hanover Court Orchestra, but no public performance came of it.

By that time, Schumann had attempted suicide and was subsequently placed in a sanatorium for the last two years of his life. Joachim had come to suspect that the concerto was a morbid consequence of Schumann’s insanity and convinced Schumann’s wife, Clara, and composer Johannes Brahms that the work should not be published. Joachim retained possession of the manuscript, which he deposited in the Prussian State Library. The existence of the concerto came to light in the early 20th century and was premiered in 1937, with a more scholarly editing of the score taking place more recently.

Regardless, the likely primary reason for its rarity is not that it is an ignored work of genius, it’s simply not all that impressive. Although absent any cadenza, there is plenty of technical playing involved in the first and last movements, with a good expressive melody in the slow second movement. But the solo part is easily obscured by Schumann’s orchestral writing, which is more often than not dark and opaque.

That is what poses significant problems for a violinist, like Midori, who does not have a robustly powerful tone. Even with the orchestra backing off on volume, as they did, Midori’s solo violin had difficulty cutting through. It doesn’t help that Schumann’s music in this instance is not all that interesting or engaging in the first place. Not the best vehicle for Midori, thus disappointing.

Redemption came after intermission with orchestral music from Richard Wagner’s operatic oeuvre. First up was the Prelude to Act I and “Good Friday Spell” from Parsifal, which were rather gorgeously played. That was followed by a broad and noble rendering of the Prelude to Act I of Die Meistersinger von Nürnberg. Spano has a genuine knack for Wagner and the orchestra was operating on his wavelength in these works, which won the day for them.