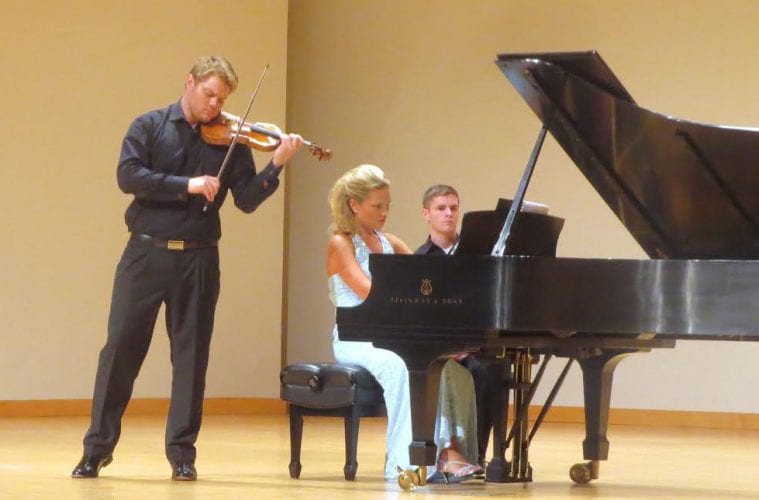 On Monday evening violinist David Coucheron, concertmaster of the Atlanta Symphony Orchestra, was the headline attraction for “David Coucheron and Friends,” a concert of chamber music by Vitali, Leclair and Chausson in Morgan Hall in the Bailey Performance Center at Kennesaw State University.

Fellow musicians for the evening included his sister, pianist Julie Coucheron, violinists Helen Hwaya Kim and Kenn Wagner, violist Catherine Lynn and cellist Charae Krueger, each of them connected in some way to KSU’s music program: Kim as professor of violin, the rest tagged in the program booklet as KSU artists-in-residence. Wagner and Lynn are also members of the ASO. All are active in Atlanta’s chamber music scene.

Born in Oslo, Norway in 1985, David Coucheron began playing the violin at age three. He earned music degrees from The Curtis Institute of Music, The Juilliard School and the Guildhall School of Music and Drama. Coucheron became concertmaster of the Atlanta Symphony Orchestra in 2010, making him the youngest concertmaster of any major U.S. orchestra at the time. In 2013, he was chosen as one of ArtsATL’s 30 Under 30 featured artists. He plays a 1725 Stradivarius violin.

David and Julie Coucheron opened the concert with the “Chaconne in G minor,” attributed to Italian Baroque composer-violinist Tomaso Antonio Vitali (1663-1745) and the work for which he is primarily known. As a recital piece, Vitali’s “Chaconne” is a favorite among violinists, despite questions raised by musicologists about its pedigree. It features a curiously wide-ranging tonal palette, venturing away from its home key of G minor into distant regions of B-flat minor and E-flat minor — something uncharacteristic of the Baroque era. The manuscript has recently been identified as being in the hand of a known copyist of the time, made no later than 1730, giving credibility that it is indeed Vitali’s work.

Not to break the hearts of musicologists, but violinists and their listeners enjoy the Chaconne anyway, in all of its out-of-the-box harmonic idiosyncrasy. And in this instance, the original continuo part — a bass line with numbers above which indicate harmonies for keyboard improvisation — was played in transcription for a modern piano, fully spelled out. Boo, hiss, to purists. Get over it. While the piano part risks overshadowing the volume of the violin, the Coucherons kept it in balance, matching their respective exuberance in this performance.

Violinist Helen Kim joined David Coucheron to perform the Sonata in E minor, Op. 3 No. 5, for two violins by another Baroque violinist-composer, Jean-Marie Leclair l’aîné (1697-1764), founder of the French school of violin playing. (The attribution l’aîné meaning “the Elder,” as one of his younger brothers was also named Jean-Marie.) As fellow violinists, Coucheron and Kim seem to be of compatible musical minds, playing engagingly as a duo in this attractive, if rather ordinary, French Baroque sonata.

In great contrast to the Baroque pieces came the final work on the program, the Concerto in D major for Piano, Violin, and String Quartet, Op. 21, by French Romantic composer Ernest Chausson, performed by the evening’s entire entourage of six musicians. It’s an unusually scored four-movement work, but not the first time ArtsATL has reviewed a performance of it. The previous encounter was a performance last year by the Atlanta Chamber Players with guest violinist Robert McDuffie.

It is worth noting that three of Monday’s musicians — Kim, Wagner and Lynn — also took part in that performance. That’s merely an inkling of the overlap there is between Atlanta’s chamber music groups, whether well-established or ad hoc. Even so, Monday’s performance felt like it was the more vivid and engaging of the two.

At 40-minutes duration, Chausson’s “concerto” is more like a sextet with prominent, often brilliant, solo violin and piano parts performed by the Coucherons, supported by a quartet of strings. Extensive passages exist for violin and piano only; others without the solo violin are effectively piano quintet music. Yet there are also moments where the string quartet stands forth in its own right. In all, it represents a fascinating approach to scoring a chamber work; one which showcased well the virtuosic abilities of both Coucherons, ending the evening on a high note.