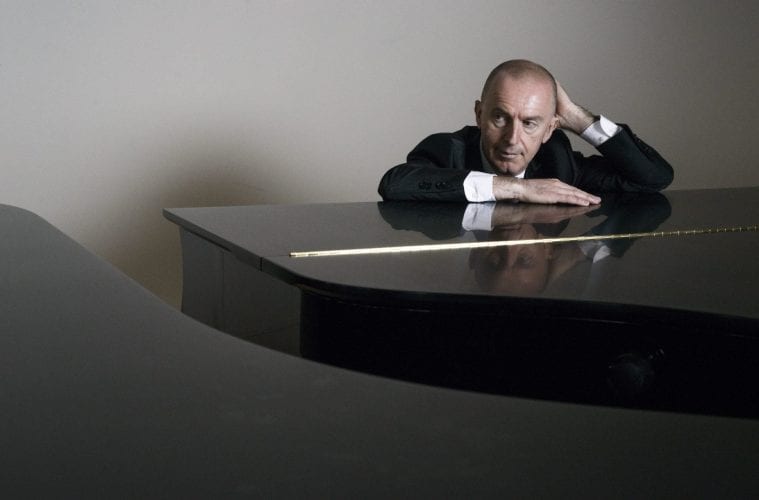 On Thursday evening at Symphony Hall, the Atlanta Symphony Orchestra, led by music director Robert Spano, performed a concert of music by Adams, Mozart and Shostakovich with pianist Pedja Muzijevic as guest soloist. The concert will be repeated Friday night in the small but acoustically amiable 350-seat concert hall at Reinhardt University’s Falany Performing Arts Center in Waleska; then again at Atlanta Symphony Hall on Saturday.

Adams gave the piece the subtitle “Foxtrot for Orchestra” after the American ballroom dance. I was introduced to “The Chairman Dances” in the late 1980s by a local collector of Oriental art who, at the time, declared that there exists some traditional Chinese music that sounds like a foxtrot. That’s something Adams himself seems to have never asserted, but it is an intriguing thought, given the fantasy scenario that the music was meant to depict: Madame Mao gatecrashes a presidential banquet, Chairman Mao descends from his portrait, and the two dance a foxtrot.

The 13-minute work opened in an assertive, motoristic manner, but developed quickly into a complex tapestry of rhythm and color, replete with spiky syncopation but also occasional lush lines of Hollywood ballroom-styled strings ascending over them. It’s a challenging piece in terms of rhythm and orchestral balance. While this performance was not letter-perfect — for one, I would have liked the luxuriant string episodes to have been more prominent — it was energized and exhilarating.

Next up came a work written 200 years before the Adams piece: W.A. Mozart’s Piano Concerto No. 22 in E flat major, K. 482 (1785). Guest piano soloist Pedja Muzijevic took the stage to join Spano and the ASO in its performance. Muzijevic’s previous appearance with the ASO was in March 2011, also performing a Mozart piano concerto, No. 17 in G Major, K. 453 (1784) with guest conductor Gilbert Varga.

Clearly Muzijevic has a particular penchant for Mozart, which showed in this evening’s performance, especially the velocity and smoothness of the prominent lines given by Mozart to the pianist’s right hand. Muzijevic’s formidable fingers made seemingly easy work of it, but also with an affecting musical insight that seemed equally at ease, without undue bombast.

The second half of the evening was the Symphony No. 5 in D minor, Op. 47, of the prominent 20th-century Russian/Soviet composer Dmitri Shostakovich (1906-1975).

It opened with an arduous figure that set the troubled tone of the entire first movement. It developed persistently, climaxing in a sardonic march, then retreating to a quieter ending of emotional uncertainty. The second movement came across like a parody of a scherzo by Mahler, but angular and edgy, with a nervous, even desperate sarcastic wit. The elegiac third movement, marked Largo, required greater patience of the listener, its long melodic lines hanging in the air, as sober as the end of the first movement.

The symphony’s final movement opened with a mighty chord in the winds and its signature solo timpani figure of alternating D’s and A’s, introducing a fearless theme in the lower brass. This beginning was not as fast as I normally anticipate it should be, but broader and more deliberately paced. That choice by Spano did, however, offer more headroom room for the orchestra to develop the movement’s increasing urgency as it went along in what was a mostly relentless finale. The overall darker emotional tone of the symphony at last turned to triumph at the end with an extended coda in D major. It was a bold, engaging showing for Spano and the orchestra.

Prior to Thursday’s concert only, at 6:45 p.m., came the first of the ASO’s onstage pre-concert chamber recitals. In an unusual turn for these recitals, guest pianist Muzijevic performed Mozart’s Piano Quartet No. 1 in G minor, K. 478 with three ASO musicians: violinist David Coucheron, violist Jessica Oudin and cellist Joel Dallow. The music was a fitting choice, as it was written in 1785, the same year as the piano concerto Muzijevic later played with the full orchestra. It was a fine performance of this quartet and a great intro to the evening, foreshadowing Muzijevic’s pianist flair in the concerto.