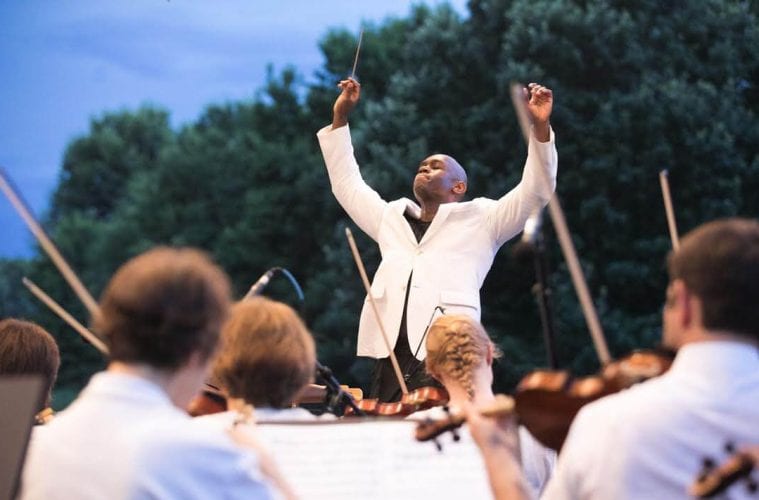 A threat of thunderstorms on Thursday evening did not dissuade the Atlanta Symphony Orchestra from performing its free open-air concert at Piedmont Park’s expansive Oak Hill quadrant. ASO assistant conductor Joseph Young led the dance-themed concert, which included both classical and popular selections. In spite of the weather, as the evening progressed an estimated 8,000 people showed to hear the orchestra perform.

It was Young’s final concert in Atlanta with the ASO. He will lead the orchestra twice more, in Gainesville tonight and in Rabun Gap on Sunday, before leaving the post to become artistic director of ensembles at the esteemed Peabody Conservatory in Baltimore. He has been the ASO’s assistant conductor and music director of the Atlanta Symphony Youth Orchestra since 2014.

Young and the ASO opened the program with the “Polonaise” that opens Act III of Tchaikovsky’s 1879 lyric opera, Eugene Onegin. Its fanfares and often sprightly rhythms served well as an opening number.

That set the stage for Haydn’s Trumpet Concerto, which featured ASO principal trumpet Stuart Stephenson as soloist. Stephenson had performed the work as his official subscription series solo debut with the ASO on January 5, but the intended repeat performance two days later was canceled due to a winter storm, which dropped a coating of ice in Downtown and Midtown, accompanied by atypical single-digit wind chill.

Given the roiling dark gray clouds looming above Piedmont Park in advance of the concert, one might easily muse whether Haydn’s concerto was cursed with regard to weather. But that proved not to be the case, as rain was thankfully held in abeyance. For his part, Stephenson displayed a liquid lyricism and great dexterity in his playing, including his very fine cadenza in the first movement. Outdoor concerts of this type are necessarily amplified, and on this evening the quality of amplification was surprisingly good, loud enough to reach the whole audience across Oak Hill’s natural amphitheater-shaped grassy landscape but avoiding the harshness that usually plagues such public events. It was good to both of Stephenson’s trumpets and to the orchestra as a whole in terms of color and balance, although typically wind instruments tend to be slightly favored over upper strings in such circumstances. But it was a more than satisfactory mix for any outdoor ASO event. Kudos to the audio techs on that.

Young then turned to the audience to offer them an opportunity to vote via Facebook on what the orchestra would play as an encore. The choices: “Irving Berlin: A Symphonic Portrait” arranged by Hawley Ades, John Philip Sousa’s march “The Stars and Stripes Forever,” or an arrangement of Queen’s “Bohemian Rhapsody.” Unfortunately, unless you were using a cell phone connection, there was no Wi-Fi internet signal available at that part of Piedmont Park for other devices like tablets.

Nevertheless, as voting began, the ASO proceeded with the next number, David Bowie’s funky post-disco “Let’s Dance,” arranged for orchestra by Evan Ziporyn. In response, ASO executive director Jennifer Barlament started and led a dance line in the VIP section that rapidly grew and made its way around the up-front restricted part of the lawn. Audience members from outside crossed over the yellow rope barriers to join in for the duration of the piece.

Two late Romantic works followed the Bowie song: the exotic “Polovotsian Dances” from Alexander Borodin’s opera, Prince Igor, and the final movement of Antonin Dvořák’s Symphony No. 9 (“From the New World”) to bring the show to its classical climax.

Then came the revelation of the audience’s choice of encore. It was an easy win, by a long shot: Queen’s “Bohemian Rhapsody” won by more than seven times the votes of the Sousa march and the Irving Berlin medley combined. Even so, the ASO also played “The Stars and Stripes Forever” as a second encore.

Most fortunately, the rain held off for the entire concert, while the cloud cover kept temperatures from being too hot, and with the concert ending at exactly 8:45 p.m., there was just enough twilight left for the audience to easily see and make their way out of the park. The program was just long enough for a satisfyingly festive evening.