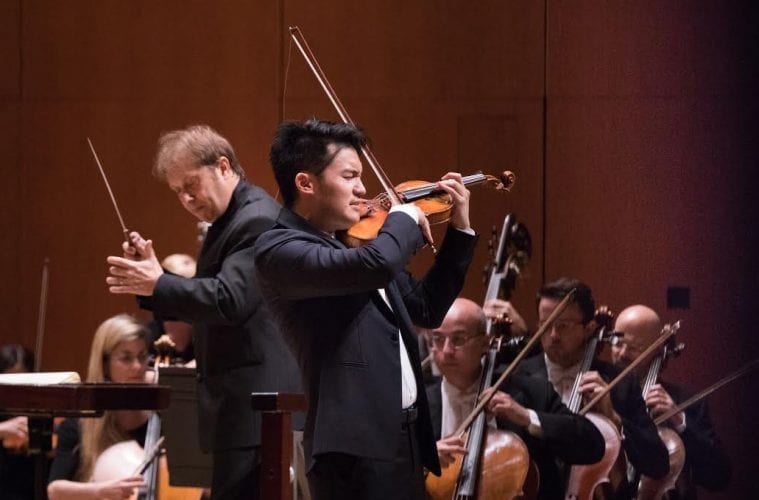 It was a refreshingly interesting program centered around early- and mid-20th century American, Russian and French repertoire. Each piece had in common a hint of the bodacious and often poetic characteristics of Parisian modernist influences, filtered through the lens of each composer’s distinctive musical personality. It served as a bit of contrast, and reprieve, from the typically heavy Germanic tone of most symphonic concerts.

Taking the podium for this change of pace was guest conductor Ludovic Morlot, who last appeared on the ASO stage in January 2016. In a nod to this season’s celebration of the music of American composer Leonard Bernstein, Morlot and the ASO opened with a work the orchestra had never played before, Bernstein’s “Divertimento” — a set of eight vignettes written in 1980 in honor of the 100th anniversary of the Boston Symphony Orchestra.

Although much less frequently heard than his more popular works, “Divertimento” is still signature Bernstein in its use of popular idioms, especially dances, often with a metrical twist that takes them outside of their familiar cast — for example, the “Waltz” is in a 7/8 meter, giving it a somewhat mirthful, lopsided appeal. Bernstein also incorporates both blatant and covert references to other music from his memories of the repertoire of the Boston Symphony, and it makes the set a kind of album of brief, fond musical memoirs of the hometown orchestra of his youth. The exception is the lovely “In Memoriam” that serves as introduction to a final “March” that has all the celebratory boisterousness of a merry-go-round calliope at a county fair.

Violinist Ray Chen then took the stage to make his ASO debut with Sergei Prokofiev’s Violin Concerto No. 2 in D major (1935). Chen proved an impressive performer, offering up a bright, well-stenciled take on the concerto, engaging his whole body, especially in the virtuosic final movement. Arguably more conventional than much of Prokofiev’s earlier, more edgy works, this concerto does possess an overall lyrical quality, which Chen set from its opening notes, a melancholy Russian folk-like melody for the solo violin alone. Sweetness without saccharine-ness marked the slow second movement before the contrasting final movement, a rustic rondo with a hint of Spanish flavor, capped off the entire work. Morlot, Chen and the orchestra received a rousing ovation.

After intermission came a kind of music not so frequently heard in ASO concerts anymore: “Métaboles” by Henri Dutilleux, a 20th-century French composer of a rather personal, idiosyncratic style that makes sensuous use of harmony and orchestral color. The ASO has played it only once before, almost exactly 40 years ago, when Robert Shaw was seriously stretching the palette of the orchestra’s repertoire.

“Métaboles” is made up of five contiguous movements, played without pause, each highlighting a particular instrumental group, the last one consolidating the whole; one could arguably consider it a kind of concerto for orchestra. It begins with a sonic flavor that recalls early Stravinsky, but quickly begins to morph over the course of its 17 minutes, radically in its tensional energy — at times radiant, at others murmuring, at times strikingly brash before surging to its exhilarating conclusion.

Morlot and the ASO rounded out the program with a sure-fire winner, Maurice Ravel’s “La Valse,” giving the composer’s rambunctious, off-center take on the ballroom dance a particularly exhilarating, exuberant rendering that deservedly brought the house to its feet.

At 6:45 p.m., prior to the main orchestral concert, nine members of the ASO presented the first of this season’s chamber music concerts, in which the audience is invited to sit onstage with the performers.

Cellist Joel Dallow and contrabassist Karl Fenner opened the program with an engaging performance of Gioachino Rossini’s Duo for Cello and Bass in D major (1824). Fenner joined the ASO in January of 2016, making his debut as a member in the same concert in which Morlot had last guest-conducted.

In an unusual turn, the ASO bassoon section (Andrew Brady, Anthony Georgeson, Laura Najarian and Juan de Gomar) performed a handful of selections from Leonard Bernstein’s “West Side Story” (1957) arranged for bassoon quartet. Brady — the principal bassoonist — joined the ASO in January 2016; Georgeson is the newest member of the section, joining this season as associate principal bassoonist. The bassoon is a noble instrument; the chance to hear a quartet of them playing chamber music is a rare treat for a typical symphonic audience.

The chamber concert closed with “Navarra” by Pablo de Sarasate, performed by violinists Anastasia Agapova and Sissi Yuqing Zhang, and pianist Peter Marshall. Zhang is another player new to the ASO’s first violin section this season, but has already made her Atlanta chamber music debut this month with the Peachtree String Quartet. The chemistry between Zhang and Agapova, underscored by Marshall’s carefully understated accompaniment, felt good in this familiar showpiece of violin duo repertoire.