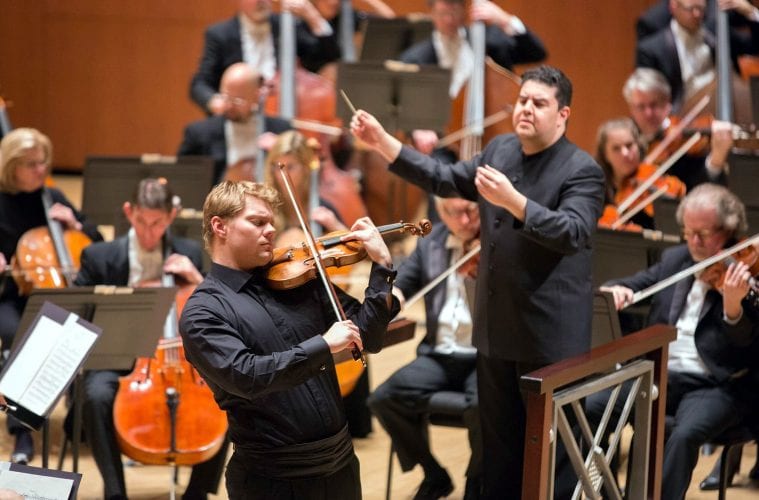 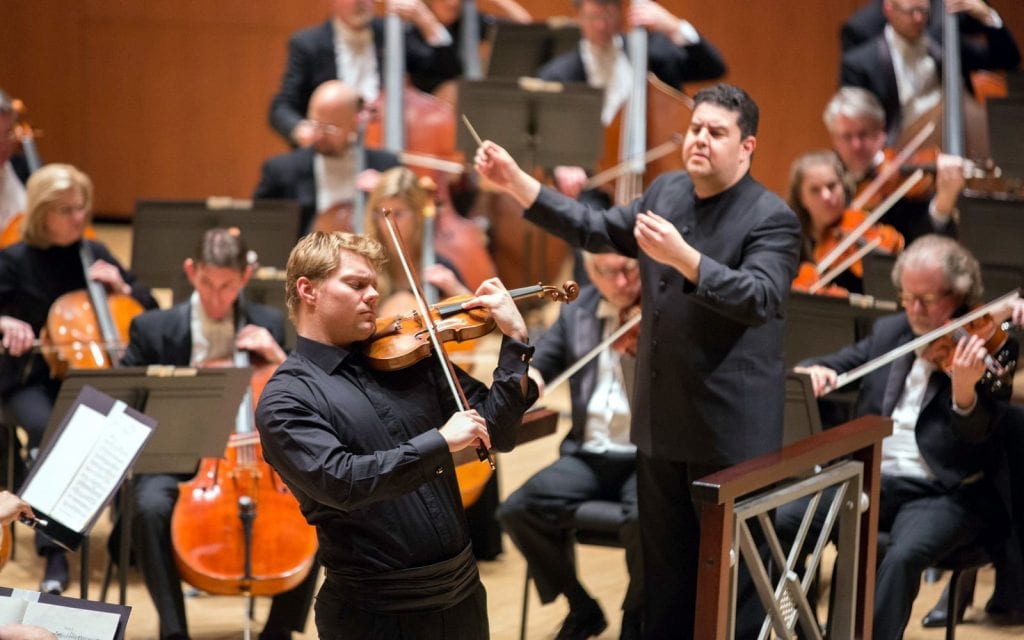 On Thursday evening at Symphony Hall the Atlanta Symphony Orchestra performed a program of music by Gould, Bruch and Dvořák led by guest conductor Tito Muñoz with ASO concertmaster David Coucheron as featured violin soloist. The full concert will be repeated Saturday at 7:30 p.m.

The evening began Thursday with a chamber music performance by members of the ASO in the hall at 6:45 p.m., replacing the usual preconcert lecture, featuring music that foreshadowed works played in the orchestral concert to follow. Dvořák’s “Serenade” for winds, cello and contrabass alluded to his Symphony No. 8, while Michael Kurth’s “Sometimes I Feel Like a Motherless Child” for string quartet, based on the American spiritual, gave nod to the opening work program by American composer Morton Gould.

Gould could be called the Norman Rockwell of music in that both composer and artist had won broad popular appeal due to how their works reflected an idealized American culture of their day. Born in 1913 in the Richmond Hill neighborhood of Queens, New York, Gould was a child prodigy as pianist with keen capacity for improvisation and composing. As the Great Depression began, while he was still a teenager, he found work playing in motion picture theaters and with vaudeville acts in Manhattan.

When Radio City Music Hall opened in 1932, Gould was hired as its staff pianist. He was soon conducting orchestras and arranging music for radio station WOR, reaching a national audience. By World War II, he was heard by millions of listeners through CBS broadcasts. In his later years, until his death in 1996, as president of the American Society of Composers, Authors and Publishers (ASCAP), Gould was considered by many to be the most powerful individual in the American music industry.

Long before the term crossover music was coined, Gould was blending an array of popular and folk idioms into his own well-crafted modern classical compositions. These days, we usually hear Gould’s works like “American Salute” on orchestral pops and community outreach concerts. Hearing one on a subscription concert of a major orchestra is much rarer.

Thursday was one of those exceptions. Muñoz, who is music director of the Phoenix Symphony, opened the concert with Gould’s “Spirituals for String Orchestra and Harp,” which incorporates nine American spiritual tunes over the course of six movements. This was ASO’s first time with the piece. It was not a particularly strong performance, having some intonation issues. The composer’s craft is well-evident, but it is not one of Gould’s most impactful works overall. It might prove more engaging up close, as a chamber work, if Gould’s scoring would allow for that option.

Next up, Coucheron performed Bruch’s Violin Concerto No. 1, one of the most popular violin concertos in the repertoire. Coucheron became concertmaster in 2010, the youngest concertmaster among any major U.S. orchestra at the time, and quickly established a reputation for playing that was primarily noted for its translucent, lyrical sweetness of tone.

The caveat is it could at times disappear like a Cheshire Cat into the overall sonic texture. Coucheron’s technical skill has always been there, but his playing seems to be evolving in terms of a wider, bolder and more expressive range without losing capacity for that signature sweetness when it needs to come to the fore.

After intermission, a surprise double-birthday tribute was added to honor two milestones this week: the actual 70th anniversary of the orchestra’s debut concert as the Atlanta Youth Symphony, and the birthday on Monday of contrabassist Jane Little, who was a charter member of the orchestra in that 1945 concert and has been a member of the ASO ever since.

Fellow contrabassist Michael Kurth secretly wrote a short piece for the occasion by conflating portions of the slow movement from Beethoven’s Symphony No. 5 with the tune of “Happy Birthday to You.” The result is a clever two-minute parody piece that has already made its way onto the ASO Facebook page from an in-rehearsal performance.

Dvořák’s Symphony No. 8 is an optimistic work heavily inspired by Bohemian folk music. This performance under Muñoz was more ordinary than remarkable. The third movement felt especially odd, as if Muñoz had tried to exchange its Bohemian sentiments for something more reserved and refined, but achieved neither. The conclusion to the symphony’s finale, however, gave the audience the kind of goosed-up, tutta la forza ending that makes them happy.