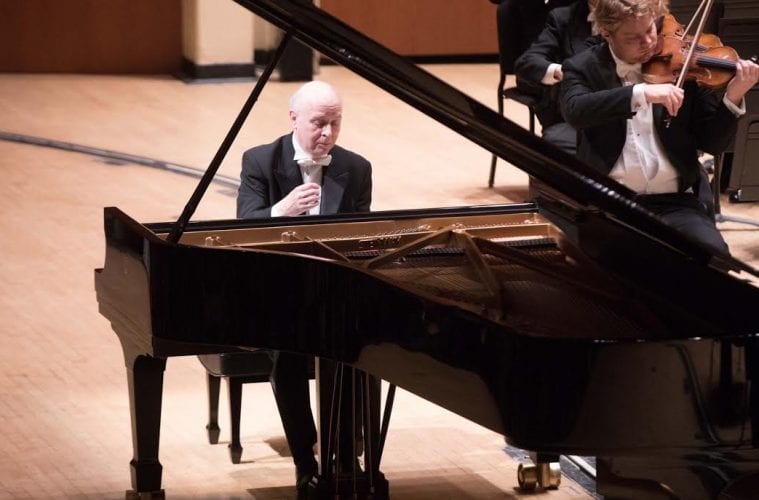 Review: The ASO hits a flat note on Schubert, then rallies for Beethoven piano concerto

The performance kicked off with the Overture to Gioachino Rossini’s opera, Semiramide — his final work for the Italian stage, premiered in 1823, after which he abandoned Italy to seek further fortunes as a composer in Paris. The Overture, as a concert piece, has enjoyed considerably more popularity than the opera itself, which is not often performed, and is credibly one of the most popular of Rossini’s overtures overall. Nevertheless, this is only the second time the ASO has programmed it on a subscription series concert, the first time being in May 1993, under the baton of Yoel Levi, who also recorded it with the orchestra for an album released by Telarc along with a half-dozen other Rossini overtures.

As demonstrated in Thursday’s concert, Overture to Semiramide is a natural curtain-raiser, to the edge of being a barn-burner at its end. Borrowing from the opera itself, unusual for the day but common in later operas, its extended architecture and scope of musical ideas in its 12 minutes’ duration — sizable for a Rossini opera, though only a tad longer than his Overture to William Tell — reflects the seriousness of the opera itself, though even in its occasional Beethoven-ish leanings, Rossini’s signature style stood out all the way through to its predictably whiz-bang ending.

In contrast, next came Franz Schubert’s Symphony No. 8, also known as his “Unfinished Symphony” by virtue of it having only two completed movements. Began in 1822, Schubert left it unfinished, even though he would live another six years and completed a Ninth Symphony between 1835 and 1840, plus piano sketches for a tenth Symphony that was also left unfinished. Piano sketches also exist for a good bit of a third movement for the Eighth — a scherzo — with a few pages even orchestrated, but the canon of common practice is to perform only the two completed movements of Schubert’s Eighth Symphony, giving it a total duration of under a half-hour.

Atypical of the ASO, it was a weirdly uncomfortable performance, with the opening a fog of uncertainty in which it was hard to grasp a secure meter. The entrance of the pizzicato lower strings in bar nine inexplicably left the disturbing impression of a 6/8 meter at moments rather than the notated 3/4 time signature, despite the extremely quiet repeated 16th notes in the violins, which they overwhelmed. Even the famous second theme starting at bar 44 seemed curiously timid and queasy. The feeling was one of the orchestra trying to find the groove in which the piece would feel well-paced, but at odds with Abbado trying to drag them in an unnatural clip.

This was a a great surprise, not only because of the total familiarity of the well-loved work, but also the performance of the orchestra under Abbado’s baton the previous week where there was no sense of disparity or tug-of-war between conductor and ensemble. The ship seemed to upright itself late in the development of the first movement, settling into a pace that seemed to work without being dragged into uncomfortable territory.

The final movement returned to that feeling of uneasiness for a while, in the end sort of ambivalently dying off into a ethereal void rather than concluding with an assured but comfortable quietude. Throughout the work, the woodwinds seemed suppressed in terms of balance with the strings, which probably contributed to the overall timorous outcome. The performance was totally atypical of the ASO, and why it happened remains a mystery.

After intermission, Jorge Federico Osorio made his fourth and final consecutive week of appearances with the ASO, performing Ludwig van Beethoven’s lyrical Concerto for Piano and Orchestra No. 4 in G major, Op. 58, concluding the marathon run of all five with the orchestra. This was also the second program in as many weeks in which he appeared as soloist with Abbado at the helm.

Osorio has been consistent in his artistic acumen, and that certainly seemed to help pull the orchestra out of its odd Schubertian slump. The opening five measures were all Osorio’s, the piano alone invoking simple dolce chords in the home key, setting the tone for the orchestra to quietly echo the theme in a chromatically related key before winding its way back to G major.

From that auspicious beginning, the orchestra pretty much shed whatever it was that afflicted the Schubert, except perhaps desire for a skosh more volume from the woodwinds. Beethoven’s Fourth Piano concerto is arguably the most lyrical of the gang of five. It gave Osorio plenty of opportunity for showing that side of Beethoven throughout in a performance on par with his previous three weeks with the ASO — the entire span of which left the listener duly impressed as Osorio accepted his final round of ovations.