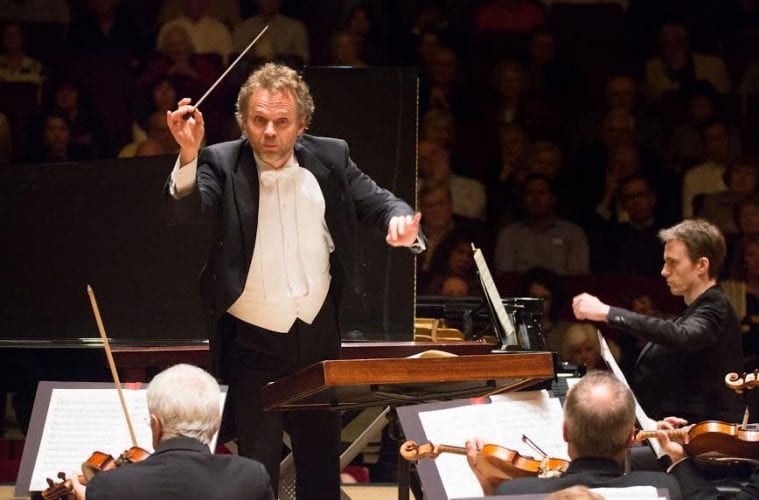 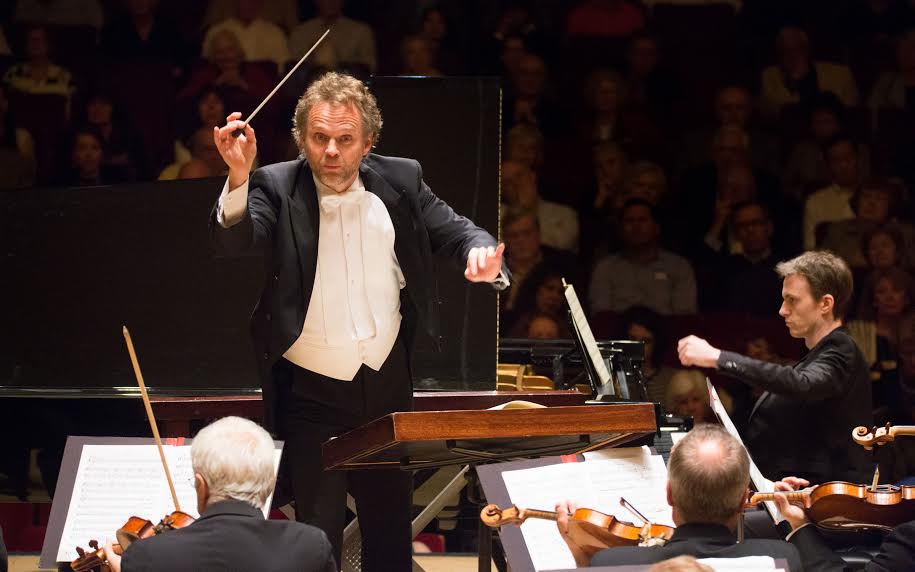 Guest conductor Thomas Søndergård and guest pianist Alexandre Tharaud made for one of most memorable ASO performances of the season. (Photo by Jeff Roffman)

Thursday’s concert was preceded by the ASO’s fourth audience-on-stage chamber recital of the season. In keeping with the theme of the orchestral program, it was likewise all-French: three sets of duos. Up first was “Cinque piccoli duetti” (“Five Little Duets”) for flute and harp, a blithe set of unmistakably French modern miniatures written in 1975 by Jean Françaix, performed by principal flute Christina Smith and principal harp Elisabeth Remy Johnson. Smith returned to the stage with principal bassoonist Andrew Brady to perform Pierre Gabaye’s 1962 Sonatine for flute and bassoon, a piece of similarly identifiable character and style to the piece by Françaix.

The recital concluded with markedly contrasting music, two selections from Maurice Ravel’s Sonata for violin and cello, a post-WWI memorial to Claude Debussy. Performed by violinist Anastasia Agapova and cellist Karen Freer, Ravel’s music was as technically brilliant as the other two duets, though more melancholy in expression.

The orchestral program kicked off with the “Le corsaire” Overture (1844) by Hector Berlioz. From the get-go, the ASO musicians were at the top of their game. It was an energized, cohesive performance with tight ensemble and a balance of forces under the baton of Søndergård. It made the ear sit up at attention and foreshadowed what would be a five-star night for the ASO.

It’s often very easy to tell whether an orchestra likes, or dislikes, a conductor. Søndergård (whose Twitter feed states that he “likes dark chocolate”) gave the immediate impression of having good rapport with the musicians. It shows in the music, as it did throughout the evening.

Tharaud then took the stage as soloist for Ravel’s Concerto for the Left Hand for Piano and Orchestra in D major (1930). The 47-year-old pianist is making his ASO debut with this week’s concerts.

The opening rumblings of the 19-minute, one-movement concerto may not have invoked the kind of mystery heard in other performances, but Tharaud gave the work an electrifying rendering, well matched by Søndergård and the orchestra. There were times when the piano and orchestra merged into a single texture, but as often than not, the piano part was in the foreground or featured alone, and Tharaud managed the single-hand part superbly to reveal the voicings within it, so that inherent melody would sing clearly.

Following the rousing ovations for the Ravel, Tharaud returned to the stage and played an encore, also for left hand only, and the only non-French piece of the evening, the lovely Chopinesque “Prelude,” Op. 9, No. 1, by Russian composer Alexander Scriabin.

If the second half of the concert seemed not as viscerally immediate as the first, it made up for it with colorful picturesqueness of two evocative works, Ravel’s Iberian dance-flavored “Rapsodie espagnole” (“Spanish Rhapsody”) and Claude Debussy’s redolent triad of oceanic sketches, “La mer” (“The Sea”), both composed in the first decade of the 20th century.

All on all, this is another one of those praise-worthy ASO concerts that should not be missed. Only one more performance remains, on Saturday evening. If you love the French repertoire and can go, you will not be disappointed.

Finally, a bit of ASO news unrelated to this week’s concerts but of timely importance:

ASO music director Robert Spano has been chosen to receive a 2016 “Champion of New Music” award by The American Composers Forum. The announcement came earlier this week that Spano is one of four award recipients this year along with pianist Gilbert Kalish, Opera Parallèle artistic director Nicole Paiement, and music journalist Alex Ross.

The “Champion of New Music” award was established by ACF in 2005 as a national mark of recognition to honor individuals or ensembles that have made a significant contribution to the work and livelihoods of contemporary composers. ACF President and CEO John Nuechterlein will present the award to Spano during an upcoming ASO subscription concert on Saturday, April 16, 2016 at Symphony Hall.