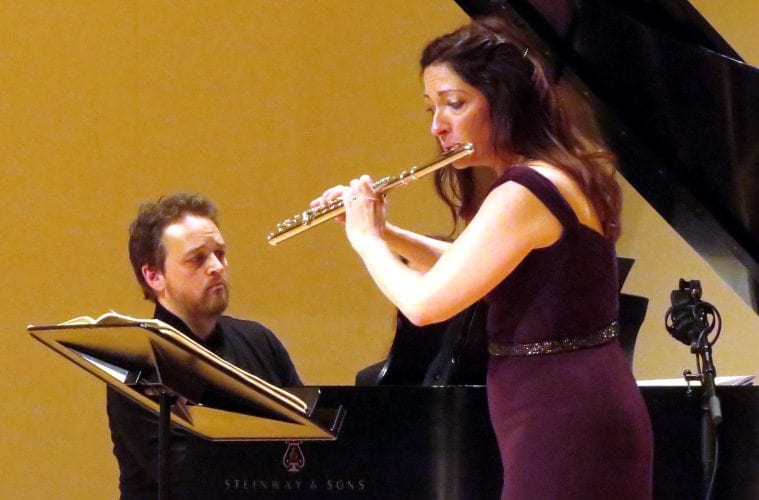 Robert Henry and the in-demand Christina Smith at KSU. (Photo by Mark Gresham)

Smith has been principal flute of the Atlanta Symphony Orchestra since she joined the group in 1991 at the age of 20. She plays a rare one-piece body, solid platinum flute made by esteemed flute maker Verne Q. Powell in 1938. It is one of only six platinum flutes handmade by Powell himself.

Smith caught sudden national and international attention this past fall when she was invited to play on a week-and-a-half notice as guest principal flute for the Chicago Symphony Orchestra and Riccardo Muti on their European tour, replacing Mathieu Dufour, who had accepted the principal flute position with the Berlin Philharmonic.

The Atlanta Symphony Orchestra was in lockout when Smith got a call from the CSO inviting her to fill in. While in the midst of the tour, the CSO invited her to join them again in late January for concerts both in Chicago’s Orchestra Hall and at Carnegie Hall in New York City. She agreed. So the last few months have been a bit of a whirlwind for Smith.

This recital had been scheduled earlier in the month, but got moved to this past Monday — doubly fortuitous as Smith had also been fighting a virus for two weeks prior.

Henry is in frequent demand as both soloist and collaborative pianist in the metro classical music scene. His upcoming concerts next month at KSU alone include March 2 with the Summit Piano Trio, on March 11 as soloist in Beethoven’s “Emperor” Concerto with the KSU Symphony Orchestra, then he closes off the month with a solo recital on March 30.

Smith and Henry opened the concert with George Frideric Handel’s Sonata No. 5, in G major for Flute and Continuo. This particular sonata was originally for oboe and continuo (HWV 363a), pitched a step lower in F major, from which the version for flute was lifted entirely by an unknown hand, perhaps Handel’s publisher Walsh in London. Since then it has been known as No. 5 of Handel’s Op. 1.

From the outset it was clear there is an excellent musical chemistry between these two musicians. Henry’s playing was both graceful and assured under Smith’s simply elegant and often sprightly flute in the eight-minute work, without pretense. It bode well for the consistently high level of the evening. The performances of the two French works that followed were likewise appealing.

Although the name Charles-Marie Widor is equated in the public mind with music for pipe organ, his Suite, Opus. 34 (1877) is popular among flutists and enjoys a significant place in core repertoire for flute and piano. It exploits well the flute’s capacities for expressive and coloristic nuance.

Next up was the Sonata No. 1 in A major for Flute and Piano (1917) by Philippe Gaubert, a distinguished French flutist and conductor. As a composer, he was known primarily for his music for flute. His compositions owe much to other French composers, but he is notable for the practice of prescribing specific qualities of sound to passages.

The musical detail required by both of these works was present aplenty, to musical satisfaction.

Sixty-year-old Australian composer Carl Vine may not be a household name among Atlanta’s classical audiences, but many of them likely experienced his music without knowing it when his arrangement of the Australian national anthem was played during the 1996 Summer Olympics. Vine’s 12-minute Sonata for Flute and Piano was written four years earlier, in 1992, for fellow Aussie Geoffrey Collins, principal flute of the Adelaide Symphony Orchestra and flutist for the Australia Ensemble.

The piece shimmers throughout. Minimalist affinities shared the overall texture well with pointillist gestures in the first movement, which was followed by a lovely slow one. The third movement’s brilliant display of velocity and articulation proved a great closer.