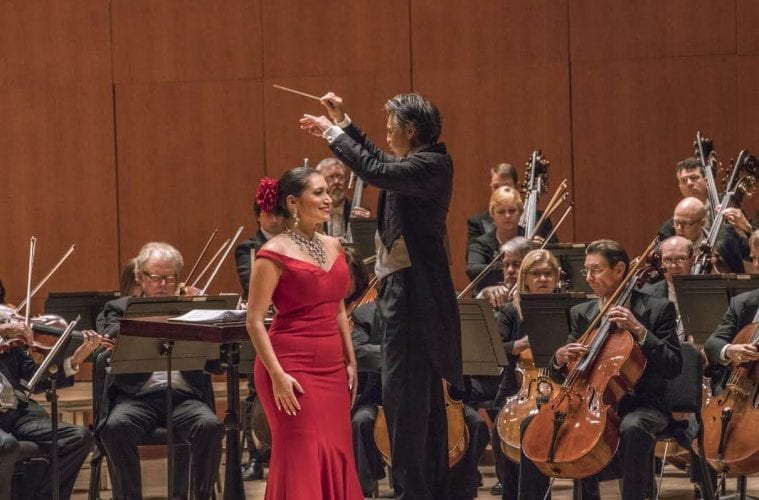 On Thursday evening at Symphony Hall the Atlanta Symphony Orchestra performed a concert of music by de Fall, Richard Strauss and Beethoven, led by guest conductor Jun Märkl and featuring soprano Catalina Cuervo and pianist Bertrand Chamayou as guest soloists. The program will be repeated on Saturday at Symphony Hall.

Märkl and the ASO opened the program with “El amor brujo” by Spanish composer Manuel de Falla. The program book provided the English subtitle “Love, the Magician,” but a more apt one might be “The Spell-Bound Love,” given the story which underlies the ballet. Caldera, a young Andalusian Gypsy girl, had an arranged marriage to a husband now deceased but whose ghost now constantly haunts her, intervening with her desire for a relationship with Carmelo.

While alive, her husband had an affair with another woman, Lucia, and it was Lucia’s husband who killed him. Carmelo talks Lucia into seducing the ghost of her former lover. While the ghost is distracted, Carmelo is able to kiss Caldera, breaking the spell, and the ghost vanishes, whisking Lucia away in the process. With the arrival of dawn, the bells of Madrid peal loudly in celebration.

For this version of the ballet played by the ASO, a revision of the original, Falla left in place three songs for Caldera, sung by soprano Catalina Cuervo, whom Atlanta audiences will recognize from her role as Maria in this past February’s performances of Astor Piazzolla’s tango opera, Maria de Buenos Aires, presented by The Atlanta Opera at Le Maison Rouge.

Within the 13 named passages of the evocative music, spanning some 25 minutes, Falla presents only limited opportunities for the vocal soloist, sung in an Andalusian Gypsy dialect. Though written for mezzo-soprano, Cuervo, billed as a soprano, has the sultry, smoky low-end notes the character of the role needs, though in that range it frequently risked being overtaken by the orchestra. Attired in a bright red dress, she presented the role of Caldera well, expressing the role’s deep passion and jealousy, and ultimate joy in voice and gesture; occasionally punctuating her singing with Flamenco-like stamps with her feet. 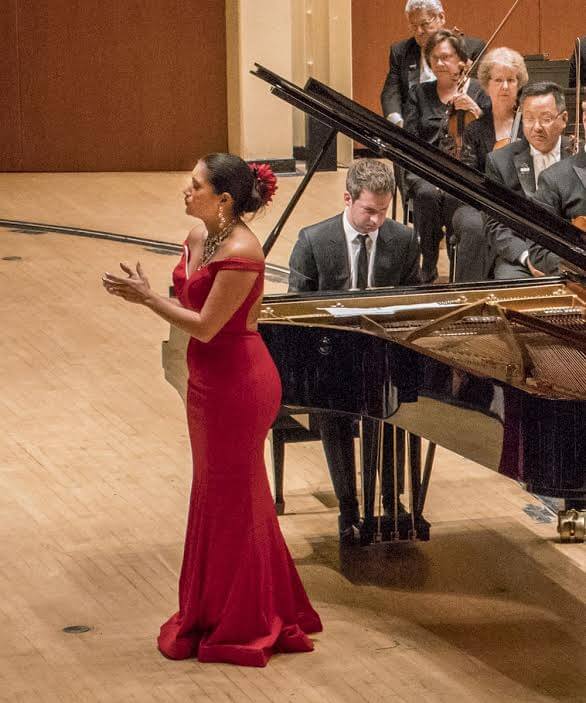 Among the several colorful highlights for the orchestra was the “Ritual Fire Dance,” a well-recognized, familiar section more often heard on its own in symphonic concerts as a stand-alone excerpt. Märkl and the ASO brought out the music’s redolent Andalusian flavors well, whether alone or in complement to Cuervo’s singing.

French pianist Bertrand Chamayou then took the stage as soloist for the youthful “Burleske” by Richard Strauss. Written when the composer was 21 years old, the work is of modest length, only about 18 minutes, but is filled with plenty of brilliant Chopin-esqe and Liszt-ian technical display for the pianist. For the most part, that is what the music serves, rather than depth of expression — even Strauss himself was unconvinced of its value in the beginning, and it took him a number of years to warm up to it. Despite the fact that its dedicatee, pianist Hans von Bülow, despised it and refused to play it — calling it a “complicated piece of nonsense” – it has been taken up as a showpiece by a number of prominent pianists.

Chamayou’s performance played to its strengths, showing off his facile, flexible agility at the keys, very much in the forefront, and afforded plenty of opportunity to play several significant passages without orchestral underpinning. Worth noting is that second only in prominence to the solo piano was the part Strauss wrote for the timpani, played by ASO assistant principal timpanist William Wilder, which often had an essential dialogue going on with Chamayou’s enjoyably brilliant piano part.

After that, Cuervo and Chamayou both returned to the stage for an unlisted encore of two contrasting songs: “Nana” and “Polo ” from Falla’s “Siete canciones populares españolas” — a duo of traditional Spanish songs arranged by that composer for soprano and piano.

After intermission, the evening wrapped up with Ludwig van Beethoven’s Symphony No. 4 in B-flat major, Op. 60, a sunny and cheerful work that stands in keen contrast with his Third and Fifth Symphonies and is too often overshadowed by the prominence of both. Nevertheless, it stands on its own delightful strengths, from the mysterious reluctance of the first movement’s Adagio introduction to settle into its home key, where it then takes off at a speedy Allegro vivace clip to the slow second movement, with its insistent dotted rhythms, empyrean lyrical principal theme and atmospheric conclusion; the bucolic, expanded scherzo and trio (which, frankly, outshines that of his Third Symphony); concluding at last with a deftly skittering final movement, a rather relentless, at times challenging perpetuum mobile of sorts that ventures into a humorous coda before the work’s spectacular, tutti final chords. Märkl’s incisive conducting brought forth from the orchestra an energized, well-honed performance with great dynamic contrast and upbeat emotional vividness.

Prior to the concert, at 6:45 p.m., in place of his usual concert lecture, ASO “insider” and program annotator Ken Meltzer hosted an onstage chamber performance by a half dozen fellows of the orchestra’s Talent Development Program, foreshadowing the program’s upcoming afternoon musicale at Symphony Hall on November 12. The Talent Development Program, which educates and develops musically gifted African American and Latino students, is another reminder that what the ASO does in the community goes well beyond the up-front presence of the orchestra’s subscription concert series.

Yet it is only one part of the orchestra’s overall educational programs, which also includes the Atlanta Symphony Youth Orchestra, directed by the ASO’s new assistant conductor Stephen Mulligan, which makes its own season debut this Sunday.