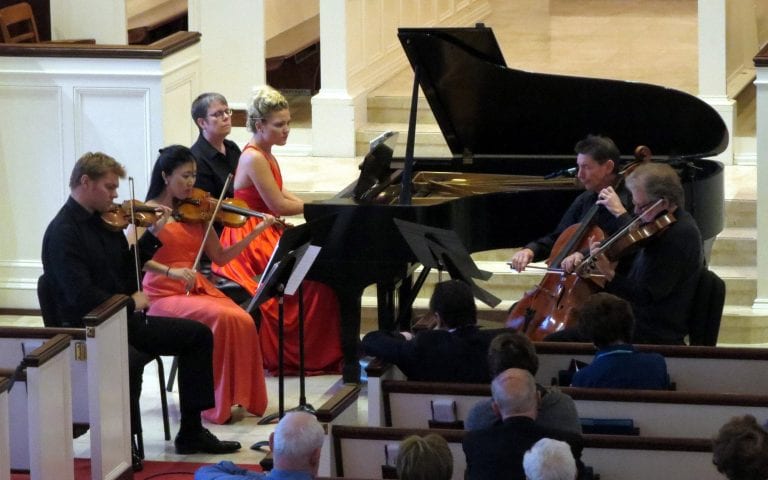 David Coucheron and Rex, respectively concertmaster and principal cellist of the ASO, opened with a vivid performance of Johan Halvorsen’s “Passacaglia on a Theme by G.F. Handel.” That was followed by Brebach and Whitehead performing the Oboe Sonata of Henri Dutilleux, a technical benchmark among solo oboe repertoire. Brebach navigated the varied challenges it poses with lovely musical effect, well underscored by Whitehead.

It was then that things began to not go exactly as planned. The opening movement of Mendelssohn’s Piano Trio, Op. 66 was scheduled next, but David Coucheron’s violin part was suddenly discovered to be missing. A backstage search ensued. Rather than pause the concert, he came onstage alone and, to the audience’s delight, offered up an engaging impromptu performance of the Prelude and remarkable Fugue from Bach’s unaccompanied Violin Sonata No. 1 in G minor.

Rex then took the stage to play sarabandes from a pair of Bach’s unaccompanied Cello Suites, Nos. 3 and 5. Both gentlemen played these “bonus performances” from memory, while a replacement violin part for the Mendelssohn was found online and printed. Instead of performing the Mendelssohn next, in its intended spot, the remaining repertoire order was shuffled.

Agapova, Lynn, Ritchie and Whitehead performed the “Andante cantabile” movement from Schumann’s Piano Quartet, Op. 17. Only after that did Rex and the Coucherons play the Mendelssohn excerpt. It seems what had caused the missing music kertuffle is that David Coucheron had accidentally picked up the wrong part for the Mendelssohn, leaving his violin part at home. He remarked to ArtsATL during intermission, “That was the first time that’s ever happened in my life!” It will also likely be the last.

Music after intermission focused on repertoire featuring wind instruments: Skitch, Buncke and Johnson performed André Jolivet’s gently introspective “Pastorales de Noël” for flute, bassoon and harp. Skitch was then joined by clarinetist Ardan and pianist Bayles for the concluding work, Libby Larsen’s “Barn Dances,” a spunky and often impishly fun example of the “Americana” side of Larsen’s oeuvre. Its second movement, “Divide the Ring,” is an homage to singing cowboy Gene Autry.

Three of the performers in Friday’s concert, Rex and the Coucherons, were also musicians for Sunday afternoon’s Georgian Chamber Players concert. They were joined by GCP member and ASO principal violist Reid Harris along with guest violinist Helen Hwaya Kim. The audience was a little smaller than at Kellett and in a much larger space.

The first half was a splendid rendition of Beethoven’s “Archduke” Trio by Rex and the Coucherons. The rest of the program proved as thoroughly American in their own ways as Larsen’s music on Friday.

“Ashokan Farewell” by fiddler Jay Unger is certainly his best known composition, heard in many arrangements but most notable for its use in Ken Burns’ serial documentary The Civil War. Unger himself describes it as “a Scottish lament written by a Jewish guy from the Bronx.” Although not credited in the printed program, veteran CBS play-by-play sportscaster Verne Lundquist began it by reading a Civil War Union soldier’s farewell letter to his wife from the field, with the music, sensitively performed by the Coucherons, entering under the latter paragraphs of the reading.

The full ensemble concluded with Peter Schickele’s Piano Quintet No. 2. Although better known to the general public for his fictitious comic alter-ego P.D.Q. Bach, Schickele has been a prolific composer of serious music throughout his career. This particular quintet exhibits Schickele’s vast capacity for eclecticism, including references to American popular styles from boogie-woogie to square-dance fiddling tunes in an architectural context that is Brahmsian in scope and gesture.

As with Friday’s concert, ending with an American work of this approachability left the audience energized and upbeat.