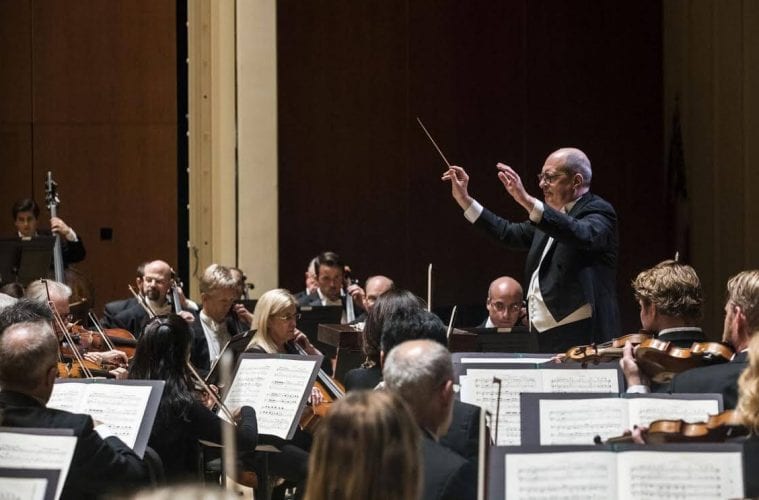 On Thursday evening at Symphony Hall, the Atlanta Symphony Orchestra, led by music director Robert Spano, performed a concert of music by Debussy, Fletcher and Rimsky-Korsakov, with pianist Inon Barnatan as featured soloist. The program will be repeated on Saturday at Symphony Hall. This week’s concerts are the conclusion of the 2017–18 subscription season.

The program began with “Prelude to The Afternoon of a Faun” (“Prélude à l’après-midi d’un faune”) by Claude Debussy, the iconic flute solo that opens the piece, unconducted, played ethereally by principal flute Christina Smith before oboes, clarinets, horns, two harps and divided strings entered to create the translucent, hushed texture that further identifies the work. One could argue that this performance was more through an American lens than purely French in character, but these are niceties of detail more felt than intellectualized. For most of us, there was ample luminosity in the performance to stave off dullness, and we could enjoy the work’s delicacy of detail, its subtly shimmering palette of orchestral colors and sensual emotional arc.

Israeli classical pianist Inon Barnatan joined Spano and the ASO to perform Alan Fletcher’s new Piano Concerto, a work commissioned by the ASO, the Los Angeles Philharmonic and the Aspen Music Festival (Fletcher is president and CEO of the festival, and Spano is music director). Barnatan premiered the concerto last July with Spano and the Aspen Festival Orchestra, then played it again with Ken-David Masur and the LA Phil in September at the Hollywood Bowl before bringing it to Atlanta for a third rendition in these concerts with the ASO.

Barnatan has become a well-known presence in Atlanta since his ASO debut in 2013, when he played Beethoven’s Piano Concerto No. 4 as a last-minute substitute for indisposed pianist Marc-André Hamelin. He returned to Symphony Hall in 2015 to play a Mozart concerto with the ASO, in addition to appearing in notable recitals at the Schwartz Center for Performing Arts and at Spivey Hall in the interim. For this performance, Barnatan chose to read his solo part from an iPad with ForScore software, a practice increasingly taken up by professional artists for new works and chamber music — recently used by pianist Kirill Gerstein and violinist Gil Shaham in their respective recitals in January and February at Spivey Hall — as it precludes the need for a page turner.

In contrast to the repertoire in Barnatan’s previous appearances here, Fletcher’s concerto did not seem the best vehicle for his musical acumen. Interestingly, the quietly introspective, chorale-like opening for piano alone is reminiscent of the similar way Beethoven opens his own Fourth Piano Concerto, but there the comparison ends. A pretense of grandiosity took over quickly, in a not particularly attractive way. The angry, tense harmonic language wasn’t the problem so much as what wasn’t done with it. The music seemed confused about where it was going, and its large orchestral statements seemed to hang on the street corner shouting slogans rather than being a rhetorically persuasive continuity.

A simple kind of solo statement by the piano returned on occasion, but for the most part the piano, even at its most forceful, was generally overwhelmed by the internally combative orchestral part, with little opportunity for Barnatan’s playing to shine on its own.

The absence of an extended cadenza was really not the problem in that regard. That textbook element is not necessary, but giving the pianist better musical elbow room certainly is. The movement’s climax involved the pianist applying forearms to the keyboard to play broad tone clusters, an iconoclastic modernist device that, in this context, felt dated and clichéd.

A quieter, more reflective though no less troubled second movement ensued, followed by a final, third movement that was a kind of quodlibet, borrowing tunes from several American song standards and a spiritual, but came across like Mantovani with the wrong notes, with salient stylistic allusions played out by muted trumpet, vibraphone, walking bass, drum kit and the like. Overall, though, these three movements felt like three distinct pieces rather than allied parts of a whole. 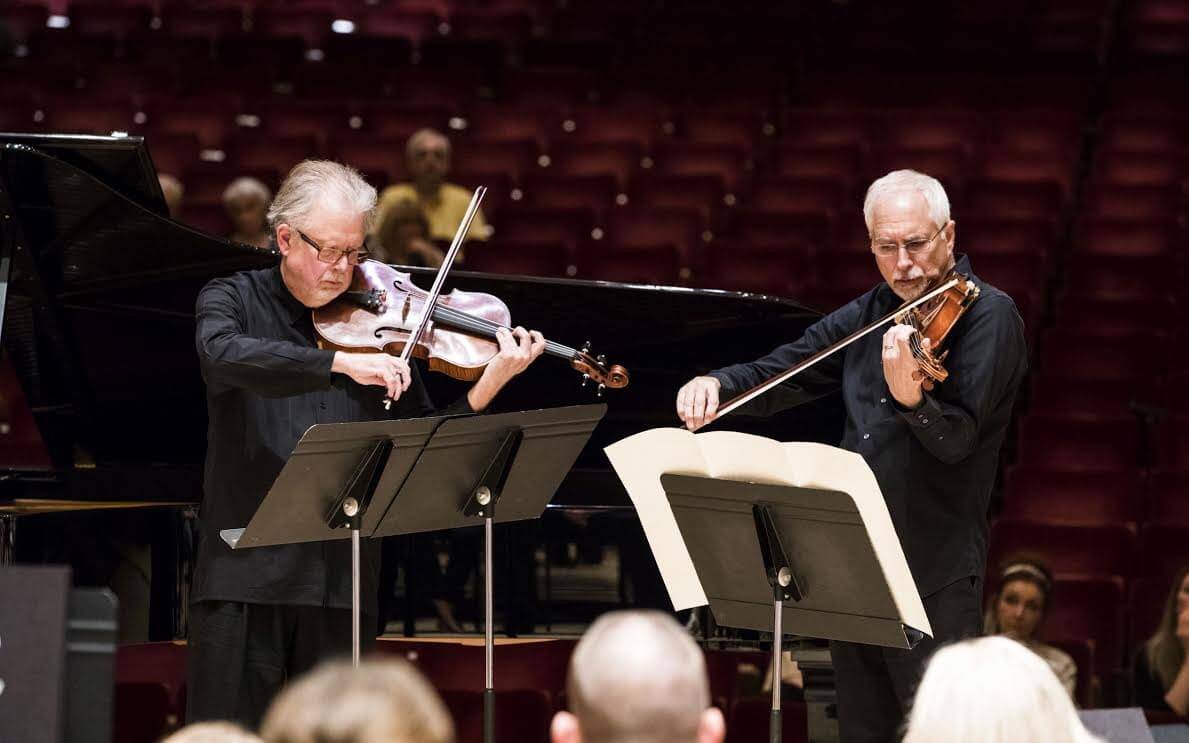 The exotic, Middle Eastern-inspired “Scheherazade,” by Nikolai Rimsky-Korsakov, concluded the program in a warmly engaging performance. In a recent interview with ArtsATL, retiring principal violist Reid Harris recalled “Scheherazade” was the first work the orchestra performed with music director Spano, and that the musicians were duly impressed. Since Harris’ last concert with the orchestra is Saturday, it will, fittingly, also be the last work the violist performs with the ASO — making it an especially touching performance for the musicians as well as the audience.

Prior to the concert, at 6:45 p.m. on Thursday only, there was also the last chamber concert of this season in lieu of a preconcert lecture.

Frank Bridge’s “Lament for Two Violas” was performed by Reid Harris and Paul Murphy, the orchestra’s principal and associate principal violists. That the two played together for this final chamber recital in advance of Harris’ retirement is a most worthy event. The two have been longtime friends as well as colleagues. A previous notable sharing of spotlight on the Symphony Hall stage occurred 14 years ago, when they performed “Two Paths” by Sofia Gubaidulina, a work for two solo violas and orchestra, to help close the ASO’s 2003–04 season.

Last but not least, a performance of Beethoven’s Clarinet Trio, Opus 11, by clarinetist Alcides Rodriguez, cellist Brad Ritchie and pianist Peter Marshall rounded out the early evening’s chamber offerings on a bright note.