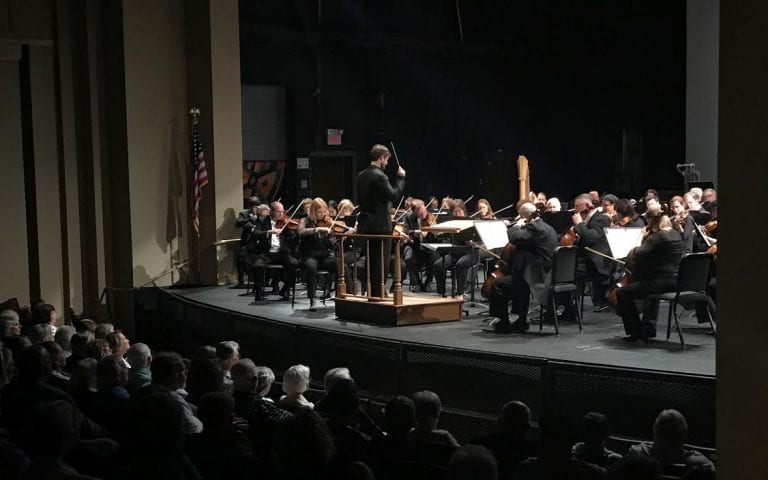 Summer is a time rife with opportunities to get out of the big city for a day or two. The mountain country of north Georgia offers attractions of various kinds within reasonable driving distance, including the annual Rabun Gap Music Festival, which was kicked off Saturday by the Atlanta Symphony Orchestra, led by assistant conductor Stephen Mulligan, in a light all-American program of music by Gould, Bernstein, Gershwin, Copland and John Williams — four composers who serve as pillars of American symphonic music in the ear of popular culture. It was also the orchestra’s final concert before their 10-week summer break, and a pleasant way to end their 2017–18 season. As for the Rabun Gap Music Festival itself, four more concerts remain, presented biweekly on Saturdays through August 18.

All of the festival’s concerts, including this past Saturday’s ASO appearance, take place at the 600-seat Rearden Theater on the campus of the Rabun Gap-Nacoochee School, a small, coed, K-12 private college prep school located in Rabun County, along U.S. Route 23/441 just south of Dillard. The school is known for starting the Foxfire magazine project in 1966, a student-published quarterly that captured oral history and craft traditions of Appalachian culture.

Mulligan and the orchestra opened with “The Star Spangled Banner” followed by Morton Gould’s “American Salute,” a set of variations on the Civil War song “When Johnny Comes Marching Home,” which he wrote literally overnight for a 1943 World War II radio broadcast. It endures as a frequently performed piece in summer orchestral programs with a patriotic theme, though the pragmatic Gould himself didn’t consider it all that unique, once quoted as saying he was “doing a million of those things” in those days.

The first half of the program was fleshed out with two arranged compilations of music by Bernstein and Gershwin. “West Side Story, Selections for Orchestra” is a 10-minute arrangement by Jack Mason that is a more Hollywood-ish potpourri of tunes from Bernstein’s musical. Although it doesn’t hold a candle to Bernstein’s own 24-minute concert adaptation, “Symphonic Dances from West Side Story” — and Mulligan and the ASO had prformed it at Piedmont Park just over a week before — Mason’s arrangement is much less detailed and difficult, and fits the bill where a shorter survey of the songs is desirable.

A similar kind of “greatest hits” treatment was afforded George Gershwin’s music in “Porgy and Bess: A Symphonic Picture” arranged in 1942 by Robert Russell Bennett, who had been Gershwin’s friend and occasional assistant. Bennett was best known for his orchestrations of Hollywood and Broadway musicals by Gershwin, Irving Berlin, Jerome Kern, Cole Porter and Richard Rodgers, far more than for his own original compositions.

The affable American theme continued after a brief intermission with “Four Dance Episodes from Rodeo” by Aaron Copland. The complete Rodeo ballet, which premiered in 1942 with choreography by Agnes de Mille, contains five sections, four of which are included, fairly, intact in this concert adaptation: “Buckaroo Holiday,” “Corral Nocturne,” “Saturday Night Waltz” and “Hoe-Down.” In over 75 years since its premiere, the music has become well-anchored in American culture, and with Copland’s other “Americana” works of the late 1930s and wartime 1940s, typified for a while what might be called the epitome of an idealized “American populist classical” style.

Next was John Williams’ “Star Wars: Suite for Orchestra,” which was assembled in 1997 by the composer as a kind of 20th anniversary musical celebration of the original 1977 Star Wars movie, now known retroactively as Star Wars IV: A New Hope. Williams’ scores for the entire series have proven popular contributions to modern film music, using over 50 leitmotifs for characters and plot themes.

As they did in the Piedmont Park concert, Mulligan and the ASO quickly offered an encore with John Philip Sousa’s “The Stars and Stripes Forever,” but unlike the somewhat embarrassing near-catastrophe with the piece at Piedmont, the ASO turned a crisp and clear performance in the Rearden Theater to cap off the evening, ending just before 9 p.m., a comfortable total duration of two hours, which allowed enough time for the audience driving back to Atlanta to be home before midnight.