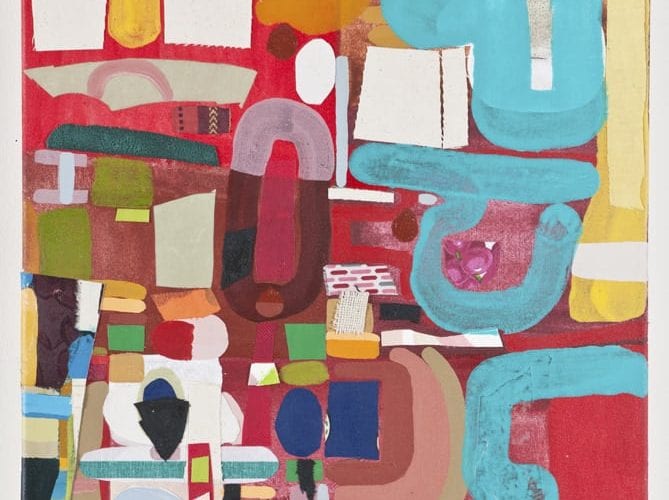 A sense of exuberance and vitality transcends the scale of the work in “abstract part 1,” a lively gathering of mostly small and midscale pieces by four artists new to Marcia Wood Gallery through December 21.

Wood pondered the organization of this show — the first installment of two group exhibitions featuring artists working in abstraction — for two years, and it shows. Her keen eye and thoughtful deliberation bring together a seemingly spontaneous interplay of work that rewards both artist and viewer. Chicago-based Kim Piotrowski shares a room with Atlanta artist Jeff Conefry. Piotrowski achieves a perfect balance of controlled potential and explosively kinetic energies. Her mostly notebook-sized compositions on panel range from the purely abstract to works that approach the possibility of narrative, though the artist deftly pulls back just in time.

She employs colorful acrylic, ink and flashe (vinyl paint) to graffiti-like effect in some. Others call to mind the gestural painting of Joan Mitchell, especially the one large painting in the exhibition, “Peaceful Waters,” rendered on a 15-foot-high scroll of Yupo paper. “Jacked” successfully bridges the two with elements of both.

The near-absence of color in Jeff Conefry’s mostly black and white works strengthens his emphasis on materiality and process. We see painting as object, something constructed and assembled. Conefry states that his work is meant to be “view specific, in need of a viewer’s presence to be completely understood.” His paintings invite us to collaborate and reward a different way of looking. They conjure an association with the recently named trends “provisionalism” and “casualism,” terms denoting a good-enough-for-now, unfinished tentativeness. But that association just takes us halfway to understanding his work. A seeming insouciance belies a time-intensive paint handling, as in “cast, stripe 2” in which the artist mimics brushstrokes with thick layers of cast black and white paint;  he describes the piece as having been “created in one place and placed in a new context.” Rough linen, exposed tacks and drippy paint may say “haphazard,” but there is nothing casual about Conefry’s respect for the material and his exactitude of process.

Sydney Cohen of Berkeley, California, and North Carolina artist Barbara Campbell Thomas share the next room. Their pairing makes for a lively and intelligent conversation, in which, as Cohen has written, “color, shape and texture get to be themselves.” It points to the serendipity and intelligence of Wood’s choices that these two would have so much to say to one another. Cohen’s “Sharing a Sandwich” and Campbell Thomas’ “Dragon Drop” look like old friends newly reacquainted. A sly humor pervades the muted intensity of Cohen’s small paintings. They trace what she describes as an imaginary path of the neural networks of the romantic yearnings of a female artificial intelligence. What? Though her quirky titles — “Yelling Childcare Advice to the Seahorse,” “Award for Best Lying Down on Pillows” — imply some narrative, the pleasure to be had here is visceral. Organic shapes lean against geometrics to create a push-pull of color and form. Muted hues view with intense color. Pathways open to new discoveries, and the urge to touch the deliciously matte surface is hard to resist. The same can be said for Campbell Thomas’ intensely colorful pieces. She combines painting, fabric and collage in balanced, tactile compositions of color, shape and texture. She describes her practice as a response to “our dense, sensory existence.” We see her hand in every form she cut, shaped or applied. The work succeeds as formal abstraction, despite the personal warmth inherent in the second-hand fabrics she uses, and stands in support of her own definition of abstraction as a “longed-for unseen” that she attempts to “eke out amidst the adamant/fluid present.”