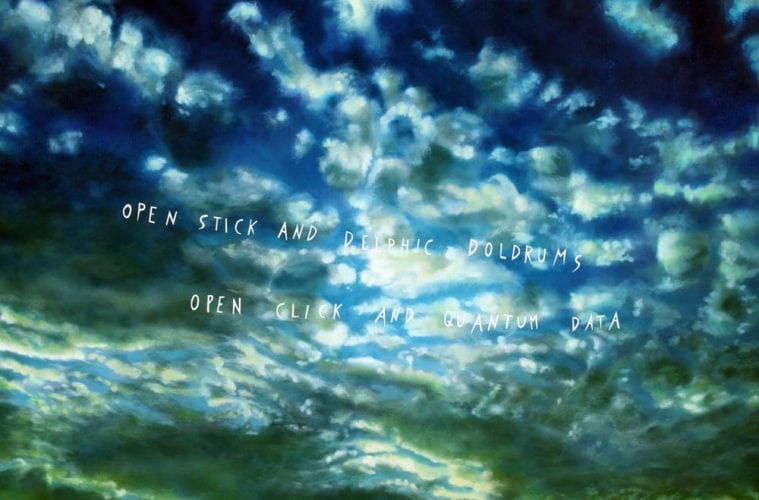 More than 35 years separate us from the original release of Brian Eno’s landmark record album, “Another Green World.” To my ears, it sounds as fresh and contemporary as ever. But it sounds a bit different now too, a little stranger. The eponymous exhibit inspired by the album at Beep Beep Gallery through February 25 can make the Eno record — and perhaps other things, too — seem different and new.

James McConnell and Mark Basehore, Beep Beep’s owners, asked 14 visual artists to choose one track from the album and create a corresponding work. They suggested that the artists consult “Oblique Strategies,” a deck of cards that Eno created with painter Peter Schmidt in the mid-1970s. A hundred or so cards bearing gnomic phrases and aphorisms, they were designed to help Eno and Schmidt break creative blocks.

In keeping with “Another Green World’s” fusion of traditional songwriting and the more minimalist “sonic landscapes” that Eno would pursue in subsequent albums — “Discreet Music” (1975), “Ambient 1: Music for Airports” (1978) — the resulting artworks range from the literal to the abstract. As different as the pieces are from one another, they share a playful engagement with ideas of distance and proximity, a theme the album also explores.

Alex Kvares has produced a small drawing for the minimalist, piano-oriented song “Zawinul/Lava,” splashing pink and light green toward the center of a black-and-white grid that resembles graph paper. What’s compelling about the piece is its elusiveness and intricacy. The tiny details draw us in for a closer look, while the overall composition and abstract shapes keep nudging us back to take stock.

Born‘s piece for the song “Becalmed” similarly plays with the viewer’s positioning. An aerosol, watercolor and acrylic painting of an azure sky with fluffy white clouds, it recalls those wonderfully dreamlike skies in Rene Magritte’s surrealist works. But here the artist has placed an almost imperceptible screen in front of the painting. As one’s eyes move about, the screen’s thin latticework causes a somewhat hypnotic flicker or shift in perception that goes nicely with Eno’s ambient music. The screen in front of the painting might also evoke Eno’s efforts in “Green World” — through nonsense lyrics, for example — to filter out individual personality.

Sam Parker’s sculpture, created for “Spirits Drifting,” is made of baby-doll parts painted white and mounted on a branchlike construction. The piece has an undeniable tactility, tempting our approach for a closer look at these haunting, porcelain-like doll parts but repelling us with the branches.

Metatronic’s mixed-media work “I’ll Come Running,” placed in a corner of the gallery to reflect the song’s first line (“I’ll find a place somewhere in the corner”), juxtaposes photographs that seem to literalize moments in the song with more abstract imagery, evoking the familiar and foreign at once.

Ditto Stephanie Dowda’s mural-size photogram “Over Fire Island,” in which ordinary things such as rocks and sand look like intergalactic dust floating in space. The work captures, as the artist says, the “flux between what’s too large and what’s too small for us to understand.”

Those unacquainted with the Eno album can find much here to charm and intrigue them. But for the Eno fan, the exhibit can also bring unexpected revelations. Megan Lillie’s piece for “Sky Saw,” for example, presents a hyper-realistic painting of a sky. Playing off the song’s opening lyric, “All the clouds turn to words,” Lillie has painted across the sky an Ed Ruscha-like sweep of words. They read: “Open stick and Delphic doldrums, open click and quantum data.”

Those, too, are lyrics from the song. As many times as I’ve listened to “Sky Saw,” however, I had never heard them before.

In “Golden Hours,” Eno sings, “Who could believe what a poor set of eyes can show you?” The works in Beep Beep’s “Another Green World” demonstrate what a keenset of eyes — and ears — can show us, even about things we thought we knew.

An mp3 player accompanies each piece, so viewers can listen to the corresponding Eno song while they look at the work.