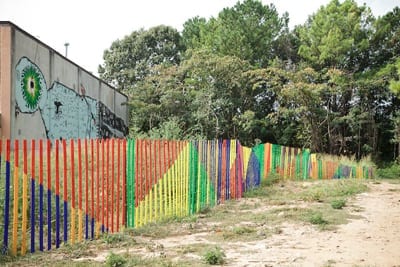 Review: “Art on the BeltLine” 2011 goes off the tracks

Following the publication of an unfavorable review of “Elevate: Art Above Underground” earlier this month, a wag dubbed this website “ArtsCriticHateATL” (or more precisely, “ArtsCriticHAtl”). I prefer to call it tough love. Regrettably, “Art on the BeltLine” is next in line for some TLC.

The 2011 exhibition, which is spread over three sections in different parts of town, showcases some new areas. But the novelty of the project and of the BeltLine has passed, which means that the art is left to stand on its own. Based on my experience of the stationary artworks (not the performances), I have to say that the sophomore effort is a big disappointment.

Problem No. 1: Finding the BeltLine. Very few access points are clearly marked, and the map is not detailed or accurate enough to help. Even aided by a smart-phone GPS system, a colleague and I spent an inordinate and frustrating amount of time just trying to figure out how to get onto the paths. We made the effort, but how many casual visitors, who like us might be exploring an unfamiliar neighborhood, would do the same? Inadequate way-finding is self-defeating and bad p.r.

Problem No. 2: Finding the art. Again, the map wasn’t entirely reliable, and though we walked the extra mile (literally) in search of some pieces, we occasionally had to give up. In addition, vandals have defaced and destroyed a tragic number of pieces and toppled many of the text panels. 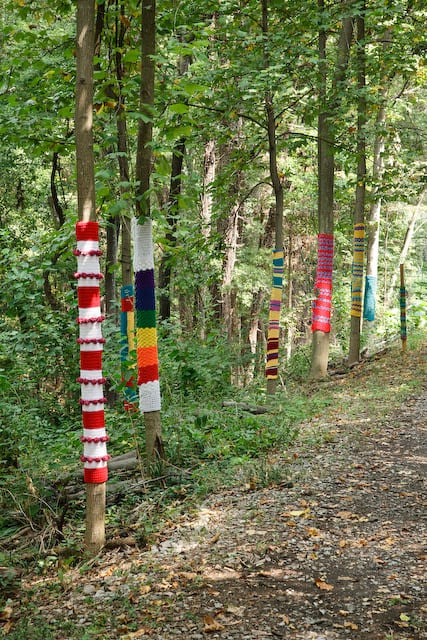 Problem No. 3: Quality. Not so good. Too many works are amateurish, derivative, ill thought out. One might chalk up some of this to inexperience, but even work by senior artists is disappointing.

Exceptions to Problem No. 3. There are some bright spots along the trails. The pièce de résistance is “Communitree” (above), an allée of trees, each bearing a yarn sleeve knitted and crocheted by a group called the Knitterati. This enchanting profusion of colors, patterns and textures creates its own spatial experience; I felt as if I had come upon some faerie glen. It also heightens awareness of the particular character of the trees and the setting, reminding us of the BeltLine’s future as a respite from urban life. A pithy concept, well executed, and accessible to all. (Photo by Christopher T. Martin.)

JD Koth’s “Twisting Passage,” a horizontal spiral of twigs and branches akin to Patrick Dougherty’s work, also makes for a pleasing spatial experience, and it serves as an enticing marker of the BeltLine entry point at 10th Street and Monroe Drive. Nearby, Jenn Garrett’s “Currents,” a pair of kinetic metal sculptures, is well made and offers a nice visual counterpoint to Koth’s piece. 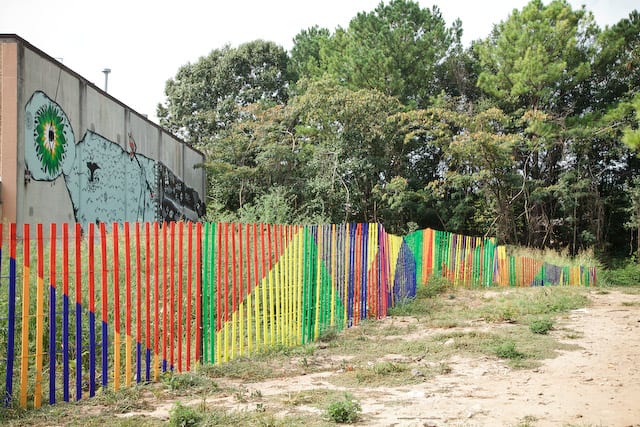 “Caja Correa,” a composition of patterned cubes and a Loch Ness-like monster painted in neon colors by Lucha Rodriguez and Paco Vergachette, similarly marks the access point near Gordon White Park on the Westside. Visitors attracted to the insouciant sculpture are then guided toward the BeltLine path by John Thigpen’s multicolored “Meandering Fence” (above).

“Whispers,” an interactive project by Misao Cates and Kim Fong, is one of the highlights in the section running between DeKalb Avenue and Memorial Drive. Visitors are invited to write their secrets on pieces of cloth, which are carefully rolled up and stored in a case, and then to tie them to the lines that stretch from the ground to a pole. The little messages flap in the breeze as if the piece were the tail of a kite, as if scattering the secrets to the four winds. Not far away, Will Eccleston’s “Uniman,” a figure constructed wittily from found objects, gesticulates and head-bobbles when someone pushes the pedals on the bicycle attached to it.

Final thoughts. Perhaps my expectations for this project are misplaced. Perhaps the idea is for people to stumble upon these works as they walk the BeltLine rather than to seek them out. It may be that the organizers are fine with the show as a laboratory for artists because creating a sense of community around the BeltLine is the more important mission. If, however, they are committed to mounting a solid art exhibition, then it might be time to rethink the model. I would vote for a smaller, more selective show. If these pieces were the best of the 147 submissions, then don’t depend on submissions. Seek out artists who can do the work, and give them enough funds to execute good ideas. Money isn’t everything, as the success of the Knitterati’s and Thigpen’s projects suggests, but $2,000, the average sum awarded to individual artists, does limit one’s ambitions. I would also suggest installing the works in a smaller area (this show covers seven miles), so that it can be more easily maintained and policed.

Please, please — and this also goes for “Living Walls” and “Elevate” — provide more detailed, more to-scale maps and adequate signage. Or invent a different way-finding system. I’ll bet the Knitterati could do something spectacular.