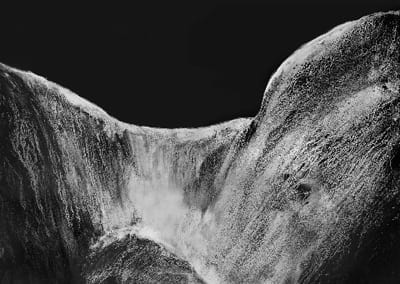 The artists will speak at Whitespace at 6 p.m. Wednesday, August 17.

Whitespace has an engaging pair in Atlanta artists Seana Reilly and Ann Stewart. Their shared interest in systems, flux and process is aptly connoted in the show’s title, “Perpetual Assembly.” It will run through September 3.

Stewart takes her place with a long line of artists from M.C. Escher to Cheryl Goldsleger, who play upon the presupposed rationality of architectural language in constructing illogical worlds. What looks like order is actually chaos, or randomness. The complex, interlocking forms in her drawings appear at first to be axonometric depictions of real-world structures — highways, maybe, buildings, machines, city plans — but they neither make sense spatially nor resolve into an understandable whole. In fact, the structures seem alternately to be in the midst of continual replication and poised to explode. (“Durable Mutation,” below.) Stewart’s materials are graphite and eraser. Wielding the pencil with authority, she creates subtle effects by altering the character of her lines and the gradations of black in the areas she colors in. But the pentimenti from the erasures are as important as the ruled lines. They are traces of the artist’s process and metaphorically resonant as allusions to, say, archaeological strata or secrets. It’s also interesting to observe how the positioning of the image on the sheet changes perceptions of the piece. Even with all the nuance, however, there’s a sameness that dulls the impact of successively viewed pieces. Fewer is more, in this case. (“Pragmatic Chaos,” below.) Stewart writes that she is interested in the relationship of visual perception and knowledge. Drawings are, to be sure, translations of three dimensions into two, of ideas into codes. But it seems to me that her goal, which she achieves, is to frustrate meaning. In so doing, Stewart exposes knowledge as a thin veneer that barely contains a vast universe we can never hope truly to understand.

Reilly pours liquid graphite onto Dibond panels (a slick aluminum composite) to create allusive abstractions. It’s a meditative process that requires the former architect to largely cede control of the work to the physics of flow and gravity and the properties of her materials. As she tilts the panels, the graphite pools, eddies and breaks up, perhaps guided by an object placed in its way, into shapes and forms that conjure up, especially in the large-scale paintings, images of vast and sweeping geological or cosmic phenomena. As the graphite dries, the artist may incise imagery into the surface, an approach evident in the smaller works in the show. The geometry of her marks — fictive symbols suggestive of maps, mathematical equations and other ordering, cognitive pursuits — contrasts with the fluidity that generally characterizes the compositions, and with their suggestion of natural forces. The small-scale pieces suggest something out of a scientist’s lab reports, which speaks to Reilly’s interest in the ways humans seek to codify, understand and control nature.

In visual terms, the pieces vary in their effectiveness. I prefer the free-form large-scale works to those in which Reilly has imposed a geometric overlay. They are more singular and edge into the territory of the sublime. The four-foot-square “Mean Curve,” which resonates as a waterfall or crashing waves, is a good example. Its title suggests the existence of some universal law that underlies the natural world.

The surreal landscape “Genetive Mutation,” which is one foot square, is one of the more successful of the smaller pieces. The notational markings in some of the others seem extraneous to my eye, though perhaps that is the artist’s intention, as a suggestion of the relationship of human knowledge to the vast mysteries of the universe. Stewart and Reilly have developed clear conceptual frameworks for their art making, which each articulately sets forth in her writings. Although their work is admirable, their thinking and their processes are more persuasive than the visual result. (Which may be just fine with many viewers.) Given their firm foundations and seriousness of purpose, however, I expect that their work will continue to evolve and strengthen. They are artists worth watching.

Smartphone owners have access to two illuminating videos on these artists. Stewart’s is a gallery of her influences, from ancient ruins and crystals to the rippling skirt of 19th-century dancer Loie Fuller. Reilly demonstrates her process. If you don’t have such a phone, the intern sitting in the gallery probably will.