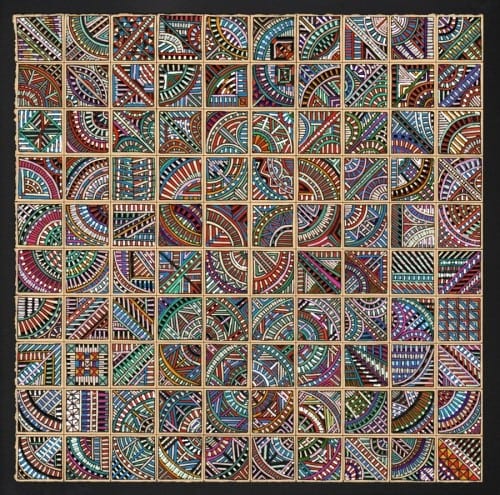 Andy Moon Wilson‘s drawings are small in scale, but they pack a highly vibrant and sometimes hypnotic visual punch.

Utilizing various geometric patterns and a full spectrum of saturated colored inks, Wilson meticulously constructs images that comprise thousands of fractal-like components, the building blocks of his abstract symbolism. At first glance they appear to be the doodles of an obsessive-compulsive — and perhaps they are — but the design and draftsmanship on display in his solo show “10 x 10,” at Get This! Gallery through April 13, transport them to another level. Wilson’s manipulation of the interplay between color and light is done with such rational simplicity that it’s easy to overlook his keen awareness of color theory. He also works with the optical interplay between the perceived fields in his designs. In some, brightly colored lines (always bordered in black) are woven in undulating patterns that produce a wave-like effect, suggesting a day-glo intergalactic highway. In others, a grid-like stacking of colored triangles mimics the pixilation of a digital photograph, causing the eye to strain in an attempt to “refocus” the perceived blurred image.

Over the years, Wilson, a textile designer, has cited visual influences as far-ranging as Gothic architecture, Persian carpet design, modernist decorative motifs, industrial design, T-shirt and CD cover graphics and “obsessive drawings done by both historic and outsider artists.” He has also acknowledged a debt to the late Simon Gouverneur, who created a personal lexicon of images influenced by patterns in traditional spiritual art from across the globe. (Curator’s Office in Washington mounted “Debt,” a joint exhibition of the two artists, in 2011.)

Some of Wilson’s works here also reference the mandala. He breaks it into its component parts and then reassembles it as a more complex version. The arcs and geometric units are still present, merely refracted, yet again forcing us to consider not only the basic units of the composition but the manner in which our eyes and brains “re-sort” the information. To some this may produce a dizzying, disorienting sensation; to others it may feel oddly calming.

All in all, while we are drawn into the seeming precision of Wilson’s work, we are always reminded that these patterns are handmade, not digitally produced. There is imperfection within the mathematical geometry of the patterns, and the tension created between order and chaos makes them all the more compelling.